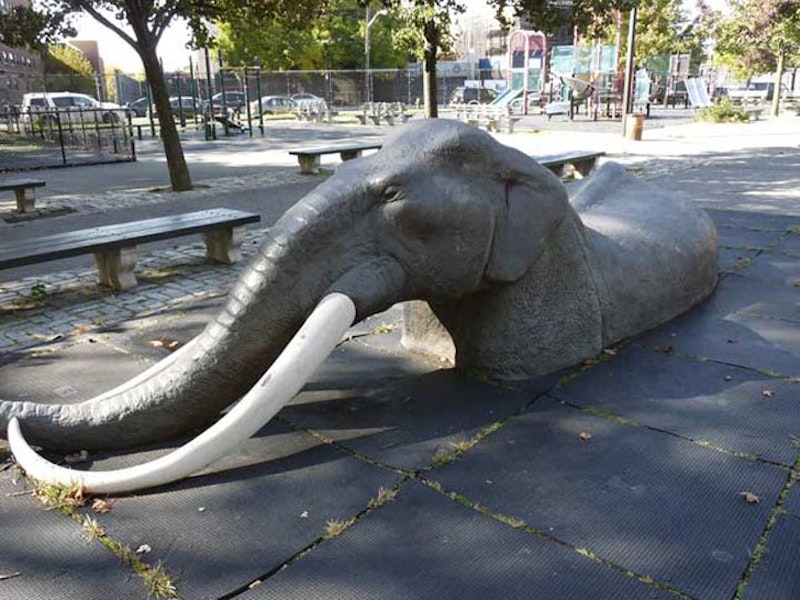 I’ve rarely visited southeast Queens. I was there a lot more when I lived in Bay Ridge, since I could bicycle almost directly east and wind up there. I’d race myself to see how quick I could do a round trip from Bay Ridge to, say, Laurelton or Rosedale, and sometimes Valley Stream. Since Brooklyn shares Long Island with Queens, it was much easier for me to get to Queens from Brooklyn. I rarely biked to Manhattan, since that would involve the Brooklyn Bridge. Roebling’s masterpiece is at present uneasily split between idling tourists and bicycle racers, but in the 1970s and 1980s, it was mugger central, and since no-fuss and no danger has always been my credo, I can count on two hands, to this day, the number of times I’ve traveled the Brooklyn Bridge on a bike.

Visitors unfamiliar with southeast Queens will find a sweeping, green oasis in Baisley Pond Park, which sits on an irregular plot between Foch, Sutphin, Rockaway and Baisley Boulevards. The park’s 110 acres offer baseball, softball and cricket fields in its southern extension between Rockaway Blvd. and the Belt Parkway, children’s playgrounds, catch-and-release fishing in its large peaceful pond, and plenty of benches.

On one of the playgrounds is what appears to be a sculpted elephant up to its shoulders in a tar pit. This is a reference to a prehistoric-era find that civic engineers made here in the early-1850s, when they were damming three streams to build a reservoir that would assist with the city of Brooklyn’s water supply. 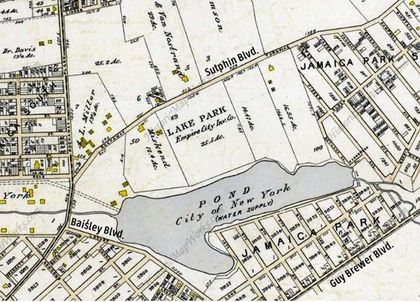 Baisley Pond, 1909. I’ve added modern street names. A number of place names in southern Queens reference water conduits: North and South Conduit Aves., Aqueduct Raceway, etc. The names refer to a former aqueduct that the city of Brooklyn constructed in today’s Highland Park called Ridgewood Reservoir, which was decommissioned in the 1960s as a water source, but was once a main source of the city’s water. The aqueduct ran between the now-demolished water works in Freeport and the Ridgewood Reservoir. 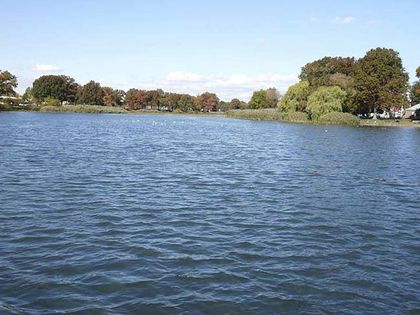 Today’s Baisley Pond, named for a mid-19th century farming family on whose land the pond was created, first appeared in the 1850s. When Brooklyn’s civil engineers were dredging the pond to make it deeper after its creation, remains were found of an American Mastodon including five molar teeth and a bone fragment, which were decades later dispatched to the American Museum of Natural History. The massive shaggy elephant-like creatures frequented southern Queens up until 10,000 years ago. The reasons for their disappearance are still debated, but likely have something to do with changing climate and the appearance in the area of the world’s most feared hunter—Man.

Bullfrogs frequent the pond, as well as snapping and red-eared turtles, dragonflies and a full array of shorebirds including web-footed friends like geese, ducks and swans as well as blackbirds, cormorants, herons, egrets, doves, mockingbirds, robins, starlings, warblers, cardinals, and the usual pigeons and sparrows. 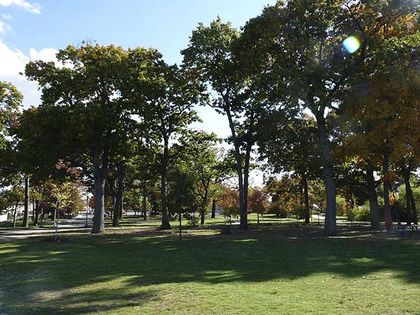 The neighborhood in southern Queens named St. Albans was mostly farmland until the 1890s, when a small community began to take shape around Farmers and Linden Boulevards. The town was named by its first 100 residents for Britain’s first Christian martyr. The area was home to the St. Albans Golf Course from 1915 to the Depression; sports luminaries such as Babe Ruth honed their strokes there. The old golf course is now St. Albans Veterans Administration Extended Care Center and Roy Wilkins Park.

Roy Wilkins Park sits on property that formerly was occupied by the St. Albans Naval Hospital. After the hospital closed in 1974 the U.S. Government allocated the 100-acre site to the Veterans Administration, which built a veterans’ extended care center on the east end of the property and ceded the western half to the city of New York in 1977 for use as a park. It remained mostly undeveloped until 1982, when $3.3 million was allocated for its redevelopment. One of the hospital buildings was renovated and reopened as the Roy Wilkins Family Center in 1986, which includes an Olympic-size pool equipped to accommodate the disabled, comfort stations, a play area, picnic tables, tennis, basketball, and handball courts, baseball fields, and a jogging path. The facility also hosts a summer day camp for 300 children, after-school programs, a counseling center, and a variety of community events.

Roy Wilkins (1901-1981) was a Missouri-born, Minnesota-raised journalist and civil rights advocate. After a stint with the Kansas City Call, he joined the NAACP in 1931 and served as the organization’s president from 1955 to 1977, promoting voter registration, fair housing laws and wage equity. 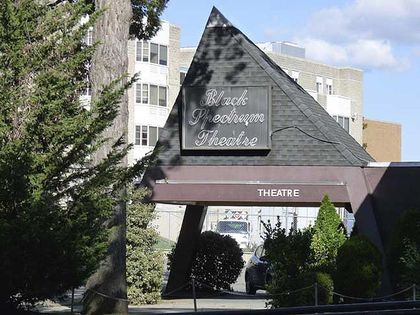 The Black Spectrum Theatre in Roy Wilkins Park was founded in 1970 by playwright, director and filmmaker Carl Clay. Black Spectrum produces film, theater and video works examining issues of concern to African-American and Caribbean-American audiences. The 425-seat theater was built in a former officers’ club. The theater holds an annual gala; past honorees have been the late husband and wife actors Ossie Davis and Ruby Dee and filmmaker Melvin Van Peebles.

In addition, Roy Wilkins Park features a huge vegetable garden tended by area residents, and an African American Hall of Fame honoring people such as the USA undersecretary to the United Nations and Nobel Peace Prize winner, Ralph Bunche, and the first Black woman elected to the House of Representatives, Shirley Chisholm. 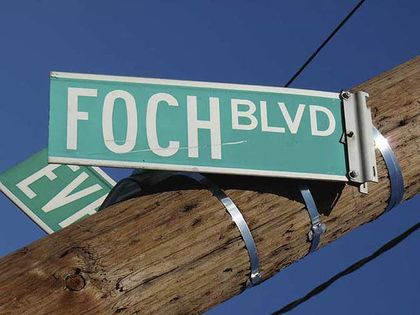 In south Jamaica and St. Albans, Foch Boulevard takes the place of 117th Ave. from Rockaway Blvd. to Merrick Blvd., with a small piece for two blocks between Montauk St. and Everett Pl. The only notable Foch I’m aware of is Ferdinand Foch (1851-1929), the commander of the Allied forces in the latter stages of World War I. Foch Blvd. appears on maps as early as the 1920s (it once was the name of Linden Blvd. from Farmers Blvd. to the Nassau County line); it may be named for the general, but his connection to Queens is fuzzy at best. 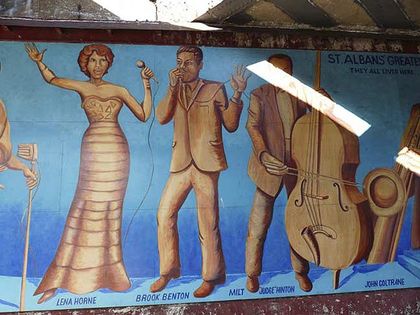 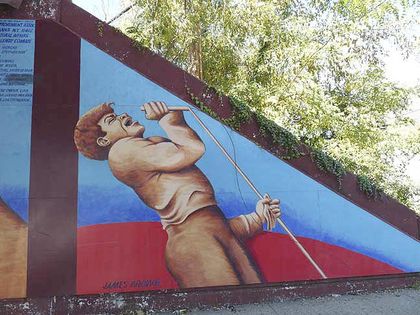 Southern Queens’ ascendance as a mecca for jazz musicians began in 1923 when Clarence Williams, a successful musician and entrepreneur from Plaquemine, Louisiana, purchased a home and eight lots at 171-37 108th Ave.. Anticipating the increasing popularity of jazz in the north, Williams moved first to Chicago in 1920 and then to New York with his wife, singer Eva Taylor, in 1923. Desiring open spaces reminiscent of his upbringing in the Louisiana delta, Williams made his home in Queens. He’d be the first in a lengthy line of jazz musicians to come to southern Queens. The area, named Addisleigh Park, was formally developed beginning in 1926 with several blocks of Tudor-style homes.

When I first encountered Linden Blvd. in St. Albans on bicycle rides from Brooklyn, and first saw it on maps in the 1960s, I was mildly amazed. The street’s western end is at Flatbush Ave., and it was originally called Linden Ave. for a few blocks and so named for Flatbush’s many linden trees at the time the avenue was laid out. Over time, Linden Blvd. was gradually extended further and further east. In the early-1920s, Kings Highway was revived as a multi-lane behemoth and a road in East New York called Vienna Ave. received the same treatment, and was renamed as an eastern portion of Linden Blvd. at the same time. Linden Blvd.’s traffic is transferred to Conduit Blvd. and then into the Belt Parkway several miles east of Kings Highway. Then, various roads in eastern Queens such as Central Aves. were renamed Linden Blvd. in advance of a grand plan to connect all of Linden Blvd. in Queens and Brooklyn that never materialized, as depression and war intervened.