Biden's proposed ban on menthols is disconnected from any broad social movement and unsolicited from the minorities it claims to protect. 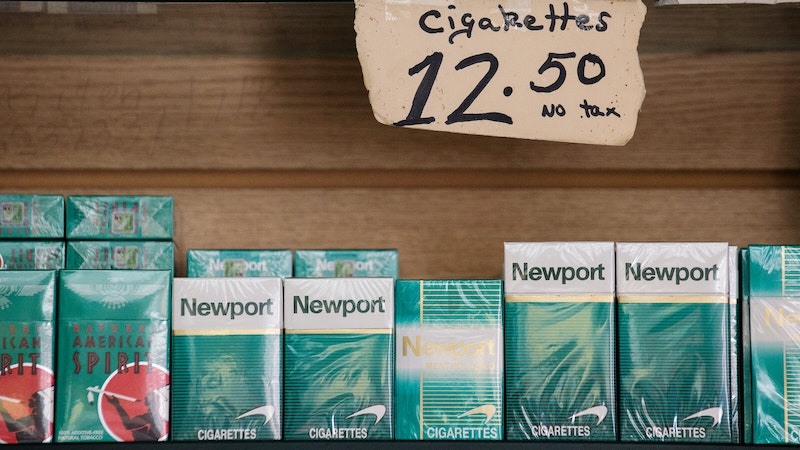 On April 29th the Biden administration announced its plan to ban the sale of menthol cigarettes. It followed the example of San Francisco, which instituted a menthol ban in 2018. That the Biden-Harris administration would model its policies after San Francisco shouldn’t be surprising. A progressive city whose poor routinely defecate in the streets, San Francisco is home to Harris, Nancy Pelosi, and the tech billionaires who donated in record numbers to the Biden campaign. San Francisco instituted the ban to improve the health outcomes of those disproportionately targeted by menthol cigarette advertising, namely the six percent of its black residents who can still afford to live there and LGBT people, once a radical political force to be dealt with, now children to be coddled. That this sort of paternalism, disconnected from any broad social movement and unsolicited from the minorities it claims to protect, would be exported to the country at large isn’t surprising given the area's status as the capital of elite power and culture. It’s second perhaps only to New York, a city whose oligarch former mayor once banned large sodas.

In the absence of any significant welfare state and the proliferation of both identitarian concerns and the social value placed on caring about them (or at least pretending to), American paternalism has set its sights on consumer markets under the premise of protecting one marginalized group or another. Newport Paternalism, as I call it, forms the basis of liberal technocratic projects today, many administered on a local level. For example, Baltimore’s attempt to use zoning laws to rid its poor black neighborhoods of liquor stores.

The origins lie in many places, the first a repulsion at the vices of the poor. The visceral language in which such habits are described reveals elite attitudes and motivations. We’re told, for example, that smoking is "disgusting" now that elites, neurotically obsessed with their health, have quit. Apart from disgust, the elite are motivated by a desire to distinguish themselves from the masses. As Catherine Liu points out, the professional-managerial class seeks to do so through the hoarding of virtue. But I argue the actual bourgeoisie are instead hoarders of decadence, which has become increasingly banal and is often imitated by higher-order members of the PMC. At least publicly, the decadent habits of the poor become measured indulgences.

Gwyneth Paltrow, whose lifestyle brand Goop markets out-of-touch solutions designed to appeal to the self-care fixated psyches of wealthy women, allows herself a single cigarette per week. This attitude toward vice is nothing new. Cocaine-fueled financiers and CEOs in New York destroyed America's working class, taking their jobs through the de-industrialization and austerity of the Reagan revolution and their homes during the economic collapse of 2008. The war on drugs would only be waged on the victims of the neoliberal age, not the perpetrators, and they never called anyone on Wall Street an addict. Like Paltrow’s weekly cigarette, cocaine for the Yuppies was a well-deserved treat, one that, because of their continued success, they could obviously handle, and one the crackheads who sold themselves on the streets for a fix couldn’t. The upper class might be better equipped to "handle" their vices, but the reasons why are never explored. They’d much rather see themselves as morally exceptional than materially exceptional. It’s not that the elite doesn’t understand that the poor live for the present. That’s well documented enough. They simply have no future to offer them.

It’s undeniable that smoking is bad for your health. Drinking is too, and substance abuse of whatever kind leads to social problems, as prohibition activists and drug warriors of the last century quickly pointed out. Newport Paternalism assumes, often correctly, that its subject minorities are "targeted" by advertisers but attributes the reasons to identitarian constructs rather than simple economics. It never asks what draws advertisers in or why it works so well. Much like its predecessors in the prohibition and anti-drug movement, Newport Paternalism falsely assumes that banning a product or making it inconvenient to obtain will stop people from using it. This especially true for the menthol cigarette ban. It’s hard to imagine anyone addicted to nicotine giving up the habit altogether just because favorite flavor is no longer available. This ban will inevitably create a black market of menthols purchased from abroad or from Native American reservations. It stands to reason that the people running this black market in the communities targeted will be members of it themselves, which will ultimately end in fines or possible incarceration.

The status of the bourgeoisie and professional classes as vanguards of decadence and virtue, respectively, is undergirded by an explicitly racial form of paternalism that affects the more liberal members of both classes, reaching increasingly absurd levels. The narcissism of these classes often leads them to turn inward, which is how you end up with a group of 13 war profiteers from Lockheed Martin in a zoom call together to discuss their white male privilege. Narcissism isn’t the only reason. Kooky displays like the self-publicized Lockheed Martin incident or the “Woke CIA ads” reflect a desire to appeal to future members of the upper classes, who’ve spent years mired in a university system that has turned empty displays of racial deference into a marker of elite social status. Poor whites work with black people, have families with black people, and live alongside black people, but rich whites "listen to their voices." But Biden's ban on menthol cigarettes reflects a more concrete form of racial paternalism that originated in the once generous government funding of NGOs during the Great Society era, many of which now rely on wealthy donors and corporate grants. Although the typical low-wage black worker might not want one of the only pleasures he can afford in life taken away, there are numerous others paid a generous salary to speak on his behalf. Sometimes because of such donation structures, these NGOs come into conflict with liberal do-gooders in government, with both claiming to be acting in minorities' best interests, as happened when the Coca-Cola-funded NAACP joined a lawsuit to stop a large soda ban in New York.

Newport Paternalism is cynical. Attempts by the state to “help” alleviate vices in minority groups should only be taken seriously when they provide material resources to address the root causes of those vices. Until the government gives the poor something to live for, the least they can do is let them enjoy a cigarette at the end of a long repetitious day.