Coke Gets in Your Eyes

The RNC may look like a Branch Davidian reunion, but Democrats are still too complacent. 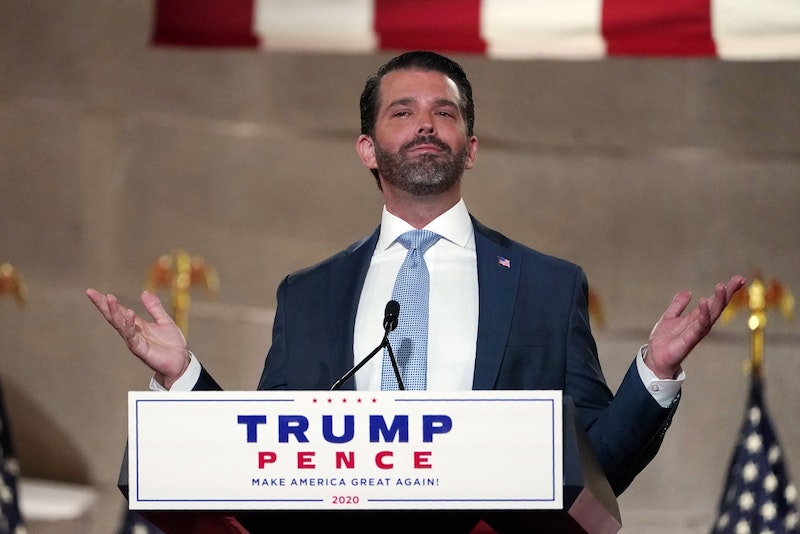 A friend of mine told me a great story the other day: he was walking in Midtown Manhattan with a mask around his chin. He finished smoking a cigarette, turned a corner and came face-to-face with a rolling suitcase pantsuit pelican monster of a white woman. Walking on 90-degree heels, she spotted my friend and stared him down, screaming “WEAR YOUR MASK!” as she approached. Before he could react, a black man behind him replied, “HEY FUCK YOU BITCH!” and the woman started stammering, “Oh my god no no no I didn’t mean you.” My friend is white.

“I didn’t mean you” is some wild double reverse racism. The other guy didn’t have a mask, who gives a shit—who’s walking around Manhattan yelling at people to put their masks on? Don’t they know about the droplets? The aerosol spray of our filthy mouths spewing toxins from our guts coming along with the words we share. We heard a lot about “aerosolized” coronavirus particles in April and May, but that went away around the time George Floyd was murdered. Like other symptoms and causes—from surfaces to “covid toes” and, as CNN’s Chris Cuomo put it, “phantasmagorical experiences that were not dreams”—the notion of airborne virus flying through the sky desperately seeking lungs has come and gone.

More violence in the country as police in Kenosha, Wisconsin shot an unarmed man in the back seven times. Somehow he survived, but the town rioted, and it barely made a dent in the news. Just another protest in a long line of familiar images beamed in from Portland, Atlanta, Minneapolis, Los Angeles, Charlotte, and so many others. Footage of these protests and riots is indistinguishable from a Paul Verhoeven movie, and we’re used to it, we watch that stuff on the same screens, along with press briefings and pill commercials.

The RNC looks deranged, but after making a documentary at CPAC back in February, it looks like old hat. Even with the coronavirus forcing an awkward “virtual convention” on both sides with equally disastrous tech results (I didn’t know I could like “Season of the Witch” less), the meat of the RNC speakers is reheated from last winter. In short, Joe Biden is the vessel for Bernie Sanders and Alexandria Ocasio-Cortez, who, according to Congressman Matt Gaetz, will “disarm you, empty the prisons, lock you in your home, and invite MS-13 to live next door.”

Rude awakening for anyone who thinks that sounds repulsive: millions of Americans want a monarchy. They’re begging for righteous martial law, a Biblical struggle. The stakes are so much higher for Trump voters than anyone else in this election. As much as the feckless professional managerial class will cry and writhe in words incoherent on Twitter in the event of a Trump win, they’ll have another day. Business has aligned itself with soft corporate wokeness, because that’s where the money is. Trump may have resigned part of himself to losing now, but his hardcore supporters—the ones I talked to at CPAC—haven’t. This is the cliff.

Mock the man who misspoke and nominated “Donald John President”—mock too the incoherent ramblings of a woman with terminal bone cancer who said that Democrats want to ply your children with “marijuana, opiates, and the right to die with dignity.” They may get their words mixed up, but this isn’t the disaster those outside the Trump bubble may see. This is the next battle.

“Cocaine” was trending on Monday night, in response to both Donald Trump Jr. and Kimberly Guilfoyle’s speeches. According to some on Twitter, Don Jr. had “watery coke eyes,” and while his delivery was certainly eye-popping (think George C. Scott in Dr. Strangelove), knee-jerk claiming that someone is “coked out” because they’re speaking loudly and confidently betrays something fundamental to those with Trump Derangement Syndrome: they cannot fathom what it’s like to be on this wavelength. They may know what it’s like to cry watching Hamilton for the 500th time, and they may know what it’s like to email a dean to get a professor fired (righteously), but they don’t know how comforting and sane the RNC looked next to the “Fuck You, Vote For Us” approach of the DNC.

“What are you, on crack?” was a common retort through the 1990s and 2000s, slang for crazy and stupid. Rising awareness of crack cocaine’s disproportionate effect on black Americans stopped that one cold around 2011 or 2012, but don’t think that DNC elitists who’d love to end popular democracy and install Barack Obama and Bill Gates to be the philosopher king rulers of our society have stopped looking down on poor people. I can’t stop thinking about Thomas Frank’s book The People, No—which I reviewed on Monday—and how many “proud Democrats” would also co-sign on the philosopher king plan. Does Andrew Sullivan still think there’s “too much democracy”?