On Cruz and other post-modernists. 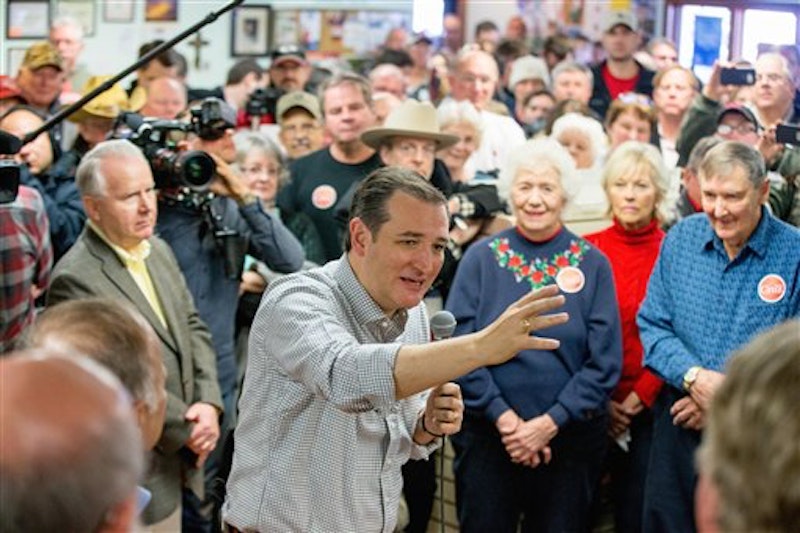 I wrote two weeks ago that Republican presidential nominees tend to be to some degree hybrids of the party’s multiple factions (including social conservatives, hawks, and libertarians). I noted that Ted Cruz, who suddenly looks like a plausible rival to Donald Trump after the Iowa caucus, arguably checks all those boxes (and the Gen X box and the growing Latino box).

I might go further, though, and add that the very office of the presidency is similarly a place for hybrids (of whatever party). After all, every other politician has to represent only a small subset of America. The president in theory represents everyone. That’s why despite the partisan panic every four years, we usually end up with a moderate of some kind in the Oval Office (not that I’m counseling complacency, mind you—nor endorsing the continued existence of the presidency or indeed of government).

George H.W. Bush was notoriously too centrist for many conservatives. Bill Clinton was notoriously too center-neoliberal for many welfare-statist liberals in his party. George W. Bush spent like a left-liberal. Barack Obama, let’s face it, was much more mellow and centrist than he could’ve gotten away with being given the economically-disquieting times during which he held office.

The Bushes are Texans but via the WASPy Northeastern establishment. Bill Clinton is an Arkansas white trash Rhodes Scholar. Obama is half-white and went to Harvard when he wasn’t living in Indonesia and/or Kansas.

They’re all a bit post-modern. Pastiches. Hybrids. Sort of like America. I don’t mean this as a celebration of any of them. They’re also monsters. Not America—I mean the presidents. Well, America, too, I suppose, is sort of a monster, stitched together and wildly careening around in an ungainly fashion.

Trump, then, is the evil hybrid we almost deserve but may yet avoid: He’s a product of reality TV, the unreality of professional wrestling, a racist dad, immigrant wives, xenophobic remarks, business crassness, vulgar tastes, government cronyism, comedy, courage, self-help, fraud, authority, rebellion, the cozy establishment, the angry masses, Democrats, Republicans, independents and reformers, wealth and bankruptcy, pragmatism and self-delusion, all rolled into one ludicrous yet charismatic bundle—and his knowing it has made him seem more likely to win.

But Ted Cruz actually understands economics, constitutional law, and conservatism. If a monstrous hybrid must lead us—and I think that’s always the case until we wise up and abolish the presidency—he’s our Anti-Trump hybrid now.

Please drop out, other 10 Republican candidates—quickly.