The GOP elite is played out. Now fear Trump. 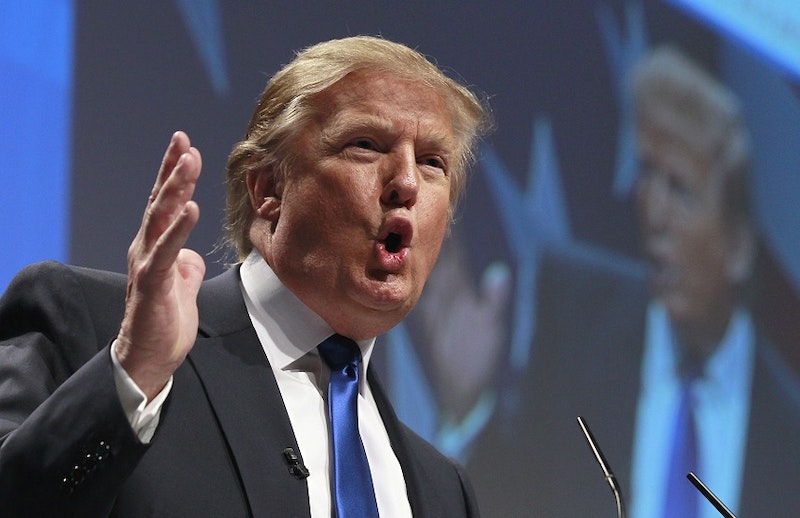 Brian Beutler has an interesting piece at The New Republic. He says we, the liberals, shouldn’t lift a finger to keep Donald Trump from becoming the Republican nominee. Trump might possibly get elected, Beutler concedes. “But that does not obligate liberals to put their interests on the line when Republicans have made no adjustments and conceded nothing,” he says. If Trump does pull it off, Beutler argues, “the onus would properly fall on #NeverTrump conservatives to deny him the presidency and hand it to Hillary Clinton.” Yes, onus. That’s the main thing that disturbs me about a President Trump. Where would the onus go?

In practice, liberals are doing nothing for any of the Republican candidates. But some of us are rooting. I very much hope that somebody other than Trump wins the Ohio and Florida primaries. Unlike Beutler, I don’t assume that Marco Rubio has a better shot at election than the Big Anus. Like Dan Pfeiffer, one of Barack Obama’s past political advisers, I figure the GOP needs somebody who can scramble things (or as Pfeiffer puts it, “dramatically change the paradigm”). If we’ve learned one thing this year, about half the Republican base has given up on its party. Try serving them a candidate from GOP Central this November. On the other hand, try serving the general electorate Crazy Ted Cruz. The Republicans have dealt themselves a bad hand.

Trump would throw the cards in the air. You or I might not want the GOP to nominate somebody who could win blue-collar voters from Alabama to Michigan. But Beutler is in a different mindframe. He figures the GOP elite and its clerics have some Trump coming. Time for them to get their heads straight. If Trump takes their party, the GOP chumps will learn a lesson. If Trump doesn’t take the party, if he isn’t the nominee, the elite and its flunkies will go on being recalcitrant dicks. Our people have often wondered what clang alongside the head would snap Republicans out of their dead-end obstructionism. Beutler figures Trump is that clang.

“Conventional political defeats are not enough to shake loose the conservative movement’s viselike grip on Republican politics. But a Trump nomination seems like it would do just that,” Beutler writes. Imagine the happy effects if this ultimate pratfall “forced upon Republicans the kind of reckoning the 2008 and 2012 elections didn’t.” With Trump forced upon them, with their base’s racism exposed by a racist nominee, the GOP would be defanged and ready to give. “If the politics of resentment were no longer readily available to them—lost to disgruntled Trump voters, or rendered toxic by the fact that they gave rise to Trump in the first place—Republicans might no longer interpret governing with Democrats as surrender,” Beutler says.

I think that next year what Republicans interpret won’t matter so much. The whang on the head comes too late. The Republican Party just collapsed. Trump may come along and heap the detritus into something formidable, but left by itself it will be rubble governed by lice with briefcases. With Trump, the party has a shot at the White House this fall. Without Trump, it doesn’t. Trump has the brains and force over on that side, and he has millions of the party’s voters. If the GOP nominated Paul Ryan or George P. Bush or whoever, the party would be very lucky if Trump didn’t get his name on some ballots and start calling up cable news shows and saying he had to get in the debates. At the very least he could tweet that his fans should stay home. They would, and they might never vote again.

I think that outcome would do a lot to ease the national crisis. Beutler thinks the answer is for the pros on the other side to get their heads straight. He wants Republicans to say that we, the liberals, were right. His head is with the old arguments. All that hassling about race, when GOP politicians blew dog whistles while their pencil-necks said we were fussing about nothing. Well, now look. “Conservatives remain loath to acknowledge the obvious, but the liberal critique of their politics is correct, and it took the Donald Trump juggernaut to wake them up to it,” Beutler says. He reflects, “Indeed, the fact that liberals had a more accurate read on conservative politics than most professional conservatives seems to bother many conservatives more than the substance of the critique itself.”

It might. Professional conservatives are caught up in the exchange of opinion. So are professional liberals. Stepping back, I think it doesn’t matter so much what the GOP’s apparatchiks and voice boxes are thinking next year. They’ll be sitting next to the wreck. If America is lucky, that wreck will be the Republican Party and nothing else. If we’re unlucky, the wreck will be the party plus everything. Hope for Trump to lose Ohio and Florida.