Even Mr. Ed the Scare Horse could tell you that. 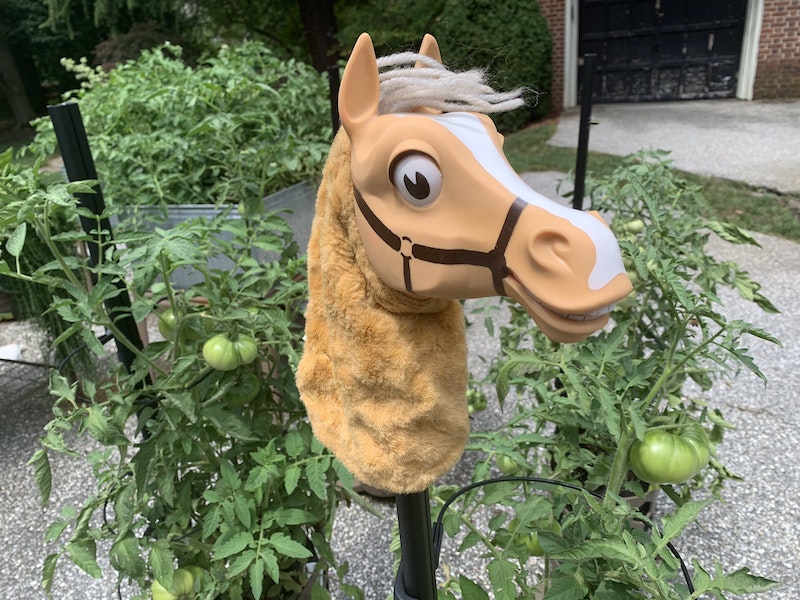 Moments of levity are scarce in this year, and you grab them by the neck. New York Gov. Andrew Cuomo lecturing other state administrations on the dangers of COVID-19 fits into the gallows humor category; Trump’s continuing tweets of “LAW & ORDER!” at first were pretty funny, but now just snicker-worthy; and the “cake” meme on social media was beyond my ken, but at least it distracted from the Biden enthusiasts (sarcastic choice of word, for if anyone’s “enthusiastic” about Credit Card Joe I’ve yet to meet them) jubilantly pointing out every single poll that shows a landslide win for the former Senator/Vice President who was such a b-level politician that there’s not a single mention of him being in the Jeffrey Epstein/Ghislaine Maxwell/Steve Bing/Alan Dershowitz/Bill Clinton/Kevin Spacey/Bill Gates up-to-no-good orbit.

What really cracked me up last week was the #BoycottGoya skirmish that instantly gave the virtuous a chance to brag that not only do they wear masks in public (“Not for me, but for YOU”) and wave their hands at any errant cigarette smoke, but also instantly threw away any Goya products in their cupboard—even if they didn’t have any—after Bob Unanue, Goya’s CEO, appeared at the White House as part of Trump’s Hispanic Prosperity Initiative photo-op (Goya’s donating a million cans of chickpeas and another million pounds of food to food bank—the nerve!). As noted many times in this space, I find Trump’s Nativism (whether real or political) repellent but big companies donating to charity hardly merits derision. Understandably, Unanue was pissed off after his praise of Trump ignited at least a campfire, noting that he worked with Michelle Obama on charity efforts, a fact buried in a New York Times story.

I’m not the cook in our household, and am unfamiliar with what’s in the larders, but my apolitical wife assured me that she buys (and will continue to) Goya products. I used to make pots of chili on Sunday afternoons until my stomach rebelled at all the meat, cheese and sour cream, and remember opening cans of Goya black and pinto beans and throwing them into the mix.

The flap also reminded me that boycotts never work. Is Chik-fil-A out of business? Coors beer? The New York Times (with all the threatened cancellations of subscriptions over Bret Stephens’ columns and, more recently, Tom Cotton’s thuggish op-ed, the naïve might think so)? What about Amazon—and Whole Foods—whose owner Jeff Bezos employs “slave laborers” who reportedly have to piss in a bottle for lack of bathroom breaks? No. And I don’t think Bezos’ proprietorship of the Trump Derangement Syndrome zine The Washington Post (two-to-one that’s where the aggrieved ex-Times pundit Bari Weiss ends up) has inoculated him. It’s just that keyboard protesters, whether they admit it or not, need Amazon in today’s online-dominated commerce market.

(Incidentally, the sighs and gnashing of teeth over Weiss’ resignation from the Times on Tuesday is just an inchworm shy of ridiculous. She’s not a pauper, has impressive credentials, and will soon land another lucrative job. I like The New York Sun a lot (and wrote maybe 100 articles for the paper when it still had a print edition), but this sentence from an editorial about Weiss was jarringly hysterical: “It’s hard to see, though, how the New York Times survives in the long run if it can’t make welcome a writer and editor like Ms. Weiss.” The Times is no longer a newspaper in the traditional sense: it’s a digital platform attempting to compete with Google and Facebook, and its contributors are interchangeable. The paper will “survive” the loss of Weiss, and even Paul Krugman, if readers are fortunate enough to see his own resignation sooner rather than later.)

Is there a boycott against Bank of America, Citibank, American Express or Chase? I’d boycott Comcast if I could, since they’ve been impossible to reach in the past week—our planned-obsolescence Internet router is shot—but I can’t and I won’t, because Verizon sucks too.

Unless you have the inclination to dig around for hours on Google—no boycott for that company or data-collector Facebook, by the way, wedding/funeral/dog/”best songs lists” are too crucial—it’s difficult to find out who or what entity has contributed to this or that campaign, unless the donors make spectacles of themselves, trying to curry favor with a politician, whether it’s Trump, Biden, Schumer or Hawley.

Translation: those inclined to boycott products or services could post 45 different hashtags on social media if they so desired. It might be a feasible way to lose weight, but not very practical on a service level. Is AAA at all political? I’ve no idea, but even if a mouthpiece from that not-for-profit private company said Trump was the greatest president since Eisenhower would anyone, stuck on a highway with a blown tire and no spare, put political principle over safety?

It’s hard to keep straight. Didn’t millions of people last year hate Howard Schultz, CEO of Starbucks, because of his egotistical float of a presidential campaign? I remember in the 1990s, in Manhattan, when Starbucks and The Gap made their first forays in the almost-gentrified (and today, getting un-gentrified) East Village and there were “grass roots” campaigns to boycott those establishments. Went nowhere.

Further back, I wrote this two years ago: “As for boycotts, what the last one that drove a corporation out of business? Not Coors, which was a left-wing cause in the 1970s, and frankly I can’t remember what it was all about. I guessing the owners were called fascists, spent millions on an ad campaign softening their image, and proceeded apace. I admired much about Cesar Chavez, but still ate grapes and lettuce in the late-1960s. And I’ll bet Bobby Kennedy, endorsed by Chavez in the ’68 California Democratic primary, did as well.”

Bankruptcies are part of the general marketplace, but I can’t remember a company going bust because of consumer outrage. One exception, many years ago, was the diet-oriented concern Ayds, which for obvious reasons was the victim of very bad luck. Tylenol’s had one or two recalls after tampering led to a few deaths, but they survived. As will Goya.