The U.S. Constitution as Icon 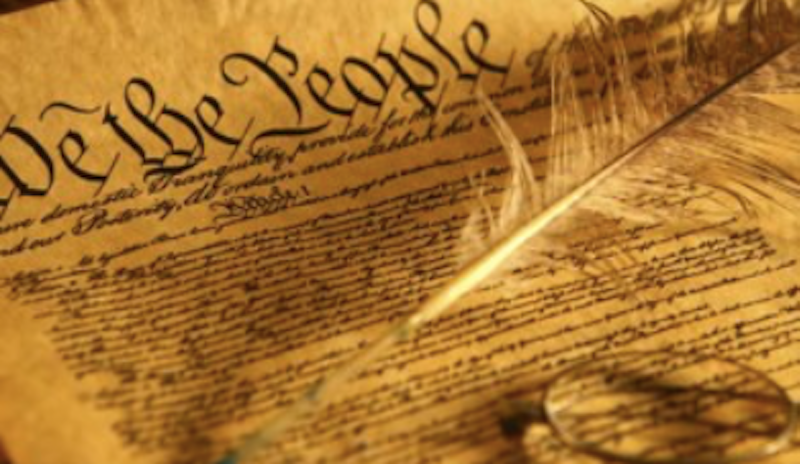 The American people's reverence for the Constitution of the United States is equaled by their ignorance of its content, of which they generally disapprove.

Upton Sinclair, muckraking novelist and radical, began a California rally by reading aloud the Bill of Rights. He was immediately arrested for disorderly subversion. Norman Thomas, the Episcopalian minister turned Socialist presidential candidate, began his rally at Jersey City's Journal Square by reading aloud the preamble to the Constitution. He got through “We, the People” before he was arrested and manhandled to the ferry.

Thomas returned with a Federal court order permitting him to speak. A crowd of machine loyalists accurately rotten-egged him. Then the cops threw him out of town again. When a reporter asked, “Why did you ignore a Federal court order? That's the law!” Mayor Frank Hague replied in the words that became his nickname: “I am the law in Jersey City.”

If the Constitution is an icon, lack of understanding is no bar to its magic, any more than it was to the spirituality of the Tridentine Mass. Indeed, think of a civil or criminal trial as a ritual analogous to any traditional religious service. Well into our times, Americans held a kind of legal faith, a reliance upon legalism and the rule of law, a belief in impartial judgment according to neutral rules.

Faith inevitably creates heresy. Here, the heretics choose to resist a government and society hiding behind a façade of legalism that’s essentially a self-serving sham.

The heretics are right, of course. The legal faith is the sort of thing Kurt Vonnegut called foma, a harmless lie that helps most of us get through life. Rules aren’t neutral: they reflect the will of those who made them and the convenience of the order they established.  As for impartial judgment, even the most honorable jurists are products of the establishment, viewing life through its blinders. As Cyril Connolly wrote, they may not “accept bribes but one day they discover that in a sense their whole life is an accepted bribe, a fabric of compromises founded on personal relationships.”

And the powerful often defy the law with practical impunity.

Legalism: Take a close look at the Declaration of Independence. It’s a pleading, a bill in equity, with a statement regarding jurisdiction, the identification of parties, a list of wrongs, an explanation of why other remedies would not suffice, a request for remedy, and a concluding oath. Thomas Jefferson might’ve used the same legal form to seek an injunction from a Virginia court forbidding a farmer from letting his cow trample the crops of Jefferson’s client.

Jefferson warned that the Constitution should not be treated “like an ark of the covenant, too sacred to be touched.” Nonetheless, it became an icon. For example, in 1913, Charles A. Beard published An Economic Interpretation of the Constitution, which plausibly argues that commercial and property interests had directed the drafting and ratification of the Constitution. The book was denounced by former President William Howard Taft as an attack on the Founding Fathers. It’s surprising that a man as intelligent, tolerant, and urbane as Taft could be so childish.

Once Taft sounded the call, the idiots joined the charge. Warren G. Harding, handsomest of empty suits, former lieutenant governor of Ohio, and editor and publisher of the Marion Star, attacked Beard's “filthy and rotten perversions” in an article, “Scavengers, Hyena-Like Desecrate the Graves of the Dead Patriots We Revere.” Poor Warren. After 30 years in the newspaper business, grammar was still beyond him. Happily, he was only a year away from election to the U.S. Senate, where he enriched the national vocabulary with such Ohioisms as “bloviate,” “honeyfugler,” and “normalcy,” before reaching the White House to prove, long before Bill Clinton, that lechers need not be Rhodes Scholars to be President.

Garrison’s immortalized largely by a run-on sentence from the first issue of his newspaper, The Liberator: “I will not equivocate-I will not excuse-I will not retreat a single inch-and I WILL BE HEARD.” It’s a memorable turn of phrase. In an oration on July 4, 1854, Garrison denounced the Constitution as an agreement with hell. He then burned a copy of it. The ashes fell to his feet and he ground the icon’s shriveled remains under his heel.

Garrison had many noble qualities, as he often reminded his readers. He loathed racism and slavery, didn’t seek office or advancement, and was a feminist long before the 1848 women’s rights convention in Seneca Falls. He didn’t respect decisions of the courts with which he did not agree, although he expected the system he hated to protect his rights. Garrison's ideology has been defined as a Christian anarchism, a “perfectionism” which expressed a literal allegiance to the true government of God and a concomitant rejection of the laws, courts, and constitutions of men. Of course, Garrison alone defined the true government of God that he would accept. There’s little substantive difference between a modern militiaman or tax resister swearing allegiance to a Constitution of his own interpretation and Garrison's repudiation of his allegiance to the United States.

Elizabeth Cady Stanton's heresy stemmed from women's inequality under law. She was among the first to articulate this notion, particularly in the Declaration of Sentiments, a fast re-write of the Declaration of Independence prepared for the Seneca Falls convention. Throughout her career, Mrs. Stanton repeatedly, intelligently, and constructively argued by specific example that the law was biased against women.

Mrs. Stanton enjoys a reputation beyond her deserts. Like Margaret Sanger, the birth control advocate, Mrs. Stanton was an elitist, nativist, and racist. Unlike Bella Abzug, Mrs. Stanton's activism was founded, not in a passion for justice, but personal resentment at society's unwillingness to acknowledge her self-perceived greatness and gift for leadership. Mrs. Stanton was interested in votes only for well-educated, upper-middle class white ladies like herself and not for the maid or the washerwoman. She habitually referred to African-Americans collectively as “Sambo.” She denounced Irish, German, and Chinese immigrants. Many modern feminists, such as Hillary Clinton, still praise Mrs. Stanton. Surprisingly, very few critics, if any, have called them on it.

Eventually, Christianity became too oppressive for Mrs. Stanton and she had the Bible re-written to her tastes. One wonders where she might’ve stopped had not death put a full stop to her career.

Eugene V. Debs, the union organizer and Socialist presidential candidate, “the noblest agitator,” a marvelous, profoundly American figure who successfully combined humanity, principle, humor, common sense, and courage, favorably contrasts with most of the heretics who come to mind. He was a likable guy. A gregarious optimist, Debs was profoundly at home with plain folks. In his early career, he was easily elected as a Democrat to public office in his native Indiana. He was eloquent and forceful.  He knew how to lead and to govern. He was incorruptible but not humorless or self-righteous. Had he been a little more conformist, he might’ve become a forgotten turn-of-the-century Congressman.

Instead, he won immortality as a union organizer. His experience of the 1894 Pullman strike, which was broken by injunctions issued without notice or hearings and enforced by Federal troops, sparked his conversion to socialism. To Debs, more than the use of armed force, the legal system itself, veneered with neutrality, was merely a tool of oppression. He believed law, legal proceedings, and legal institutions shielded and perpetuated immense economic inequalities that were unjust and profoundly evil. With fiery eloquence, he argued against the established order in his five great campaigns for the presidency between 1900 and 1920. In 1912, one of every 16 votes was cast for him. In some states, he polled as much as 20 percent of the vote.

He repeatedly used the arrest, trial, or imprisonment of a socialist to call attention to the intertwined injustices of American life and legal process. Ultimately, he’d do this for himself. In 1918, he began speaking against American involvement in the First World War. Woodrow Wilson, perhaps the 20thcentury's most overrated President, didn’t allow discussion, let alone dissent, from his war policies. The courts' cowardly surrender to his suppression of civil liberties was—and still is—a stain of dishonor.

Thousands of Americans were jailed for speaking or writing against the war, which Wilson and his Department of Justice interpreted as obstructing the draft and military recruitment. Debs was campaigning for Socialist candidates when he was arrested on such charges. He was tried, and after his speech to the Court, which begins:

he was sentenced to 10 years’ imprisonment. His sentence was upheld by the Supreme Court in a decision written by Oliver Wendell Holmes Jr., who perhaps hadn’t yet realized that his path to immortality would be that of the Great Dissenter. Debs’ health was broken in prison and he never recovered.

Other Americans self-censored. Former Congressman Thomas E. Watson of Georgia stopped speaking against the war and closed down his publications rather than face arrest. Some years later, after his election to the U.S. Senate, he introduced a resolution requesting the pardon of an Iowa editor serving 10 years for printing excerpts from the Georgian’s speeches. Watson told the Senate, “Should he be in the Senate and I in the penitentiary? He did not say any more in Iowa than I have said here in the Senate, and I think I am in somewhat better company than he. That is only an opinion of mine.”

To give President Harding his due, for he was personally honest, kindly, and gentle, soon after taking office he commuted the sentence of Debs, who had run against him from prison in 1920. As Debs returned home, the President quietly invited him to the White House. They spoke for about an hour.

The Black Panther Party held to a Debsian economic determinism. Indeed, Huey P. Newton went a step further, saying, “If we used the laws in our interest and against theirs, then the power structure would simply change the laws.” They were cynically hyper-legalistic in areas such as probable cause, carrying weapons, the rules for renting the Oakland Coliseum, the safety requirements for passengers in police vehicles, and ordinances regarding U-turns on residential streets. The Panther discussion of constitutional rights and the law largely reflected their interest in knowing the law as a tool: to protect themselves and thumb their noses at the system they desired to overthrow.

That proved useless. Both local police and the Federal government struck back directly, violently, and effectively. It was more savage than Wilson's suppression of the left. By February, 1970, the party's paper listed no fewer than 410 instances of harassment, raids, shootings, and arrests by local, state, and federal police. Some may have been justified. The murder of local party leaders Fred Hampton and Mark Clark by the Chicago police was not. This brutality was a perverse tribute to the Panthers' success.

More recently, the Ruby Ridge incident and the siege and destruction of the Branch Davidian compound in Waco indicates how much force the government will marshal to suppress dissent.

These heretics, with varying degrees of sophistication, said that the legal system held sacred by most Americans was rigged to serve certain interests. The great secret, of course, is that most Americans share their belief. The difference between the heretics and the majority is that most people desire only to live quietly in an ordered society that generally leaves them alone. The heretics want change to achieve justice. The price of their crusades are ridicule, legal troubles, jail, and in many cases, death. The body combats disruptions with antibodies. The American system protects itself by force, legally or illegally. It’s surprising that people are surprised by that.