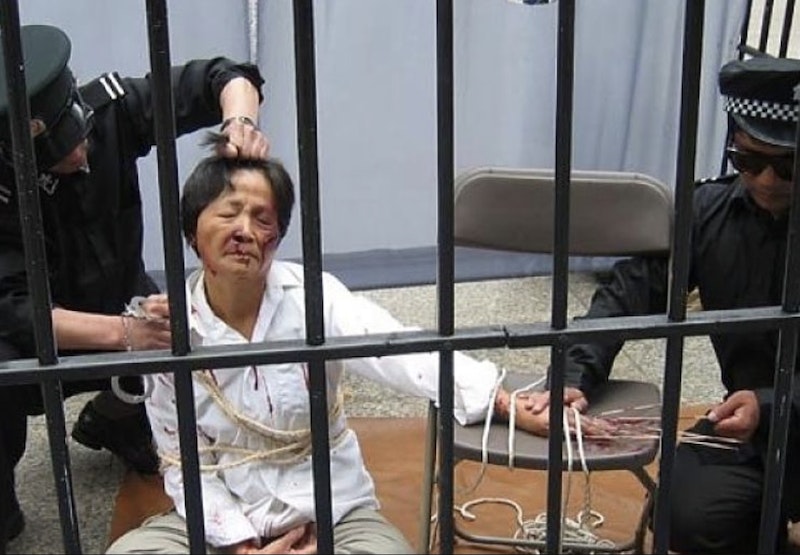 The UK, in a change of heart, has decided not to let Chinese telecom giant Huawei participate in its 5G network. This is reflective of a recent pan-European trend away from the naive view that China is a benign world force and towards a more circumspect view of China as a global predator and gross human rights abuser. Beijing has threatened retaliation against London, and now Germany’s on the spot. Will Europe's central power also risk incurring Beijing's wrath by following Great Britain's lead? German chancellor Angela Merkel is skeptical of the PRC’s intentions. While no smoking gun has yet been discovered, it's possible that Huawei's involved in espionage. Chinese corporations aren’t able to decline when their government comes calling with a mission.

If Merkel needs more evidence of the PRC's totalitarian spirit and untrustworthiness, she can look at the disturbing video of the bound and blindfolded Uighur Muslims who are waiting to be loaded onto trains headed to Chinese "re-education camps" in Xinjiang, an autonomous zone in northwestern China. Their heads are shaved—the hair will probably be sold on the open market as it has been in the past. It's nearly impossible to watch this footage and not think about the photos of Holocaust trains in Nazi Germany transporting Jews to death camps, where guards forcibly shaved their heads so their hair could be used to make boot-liners for the troops and yarn for the socks of U-boat crewman. A photo of the detained Uighurs should be on the front page of every major newspaper in the world. This is China today.

But the world doesn't appear interested. After George Floyd's death, major protests against police oppression in a foreign nation erupted in the UK, while China has received no such disapprobation in the British streets, despite the general estimate that one million Uighurs are forcibly housed, and mistreated, in detention camps. This is the same nation where people are scolded for Islamophobia if they offer the slightest criticism of Islam's teachings.

Detained Uighurs are brainwashed with an indoctrination program that includes studying communist propaganda, singing communist songs, and praising Chinese dictator Xi Jinping. China's official version is that the camps are merely vocational and training centers—enriching experiences teaching valuable skills while combating extremism. Chinese authorities don't mention the waterboarding and other forms of torture and deprivation that have reportedly been used on detainees.

Chinese authorities also avoid straight talk on the issue of forced human organ harvesting in the “vocational camps.” Last year, The China Tribunal, an organization examining organ harvesting, told the United Nations Human Rights Council that the Chinese government was taking hearts, kidneys, lungs, and skin from detained Uighur Muslims and members of the Falun Gong religious group. According to an evidence-backed and witness-supported report issued by The China Tribunal in June of last year, a "very substantial number" of prisoners were "killed to order" by the Chinese government. They were "cut open while still alive" so that their organs could be turned into commodities in the billion-dollar Chinese organ transplant business. And there are reports that rich Saudis are able to custom order the "halal" organs of Uighur prisoners before traveling to China for a transplant.

The over one billion Chinese citizens not imprisoned by their government for their religion are hardly free, living as they do in an all-encompassing surveillance state that tracks them with facial-recognition software, and closely monitors their Internet and cell phone usage, as well as domestic travel. China's the modern-day version of Jeremy Bentham's panopticon. Chinese citizens, knowing their government may be watching, regulate their behavior accordingly, which gives the communist government exactly what it wants―a docile citizenry.

The West has been naive about China's intentions since Nixon embarked on his program of "constructive engagement" in the early-1970s that was going to usher communist China into the modern world. Americans, especially those leaning left, haven't paid enough attention to the "communist" part, which is odd, given this nation's experience with the USSR during the Cold War. Unlike the Russians, however, China has the advantage of having the engine of capitalism to drive its aggressive global program and patch over its tyranny towards its minorities. It's no secret why so many Muslim nations have remained silent about the plight of the Uighurs—they need Beijing's investment money. Turkey was one of the few Muslim nations to pressure China over the matter, but it too has become compliant now.

The People’s Republic of China tried to suppress the word of its coronavirus epidemic. As a result, the world has experienced a great deal of unnecessary suffering. The PRC has blatantly stolen intellectual property and trademarks from the US for decades. China has border disputes with 20 nations, and is trying to make the South China Sea its maritime empire. Beijing has now absorbed Hong Kong, despite its 1997 agreement with Great Britain guaranteeing the city’s autonomy. This isn’t a nation to be trusted.

Uighurs from Xinjiang are sent to factories across the country where they work under what appears to be forced labor. Many global firms—including Apple, Mercedes, and Nike—have goods manufactured at these plants, while the NBA and Hollywood kowtow to the PRC for money. America’s decision to allow its economy to intertwine with the PRC’s undermined fundamental American values. The US, and the world, needs to reassess what price it's willing to pay for being able to buy cheap goods and labor.

There's no political debate in China over Beijing’s criminality, its hegemonic ambitions, or its depraved indifference to human rights, so it's incumbent on the rest of the world, especially the United States, to push back. Freezing Huawei out of Western 5G networks would be a start.