In The Management of Savagery, Max Blumenthal lays out America's decades long slide into permanent war without ever slipping into leaden prose. 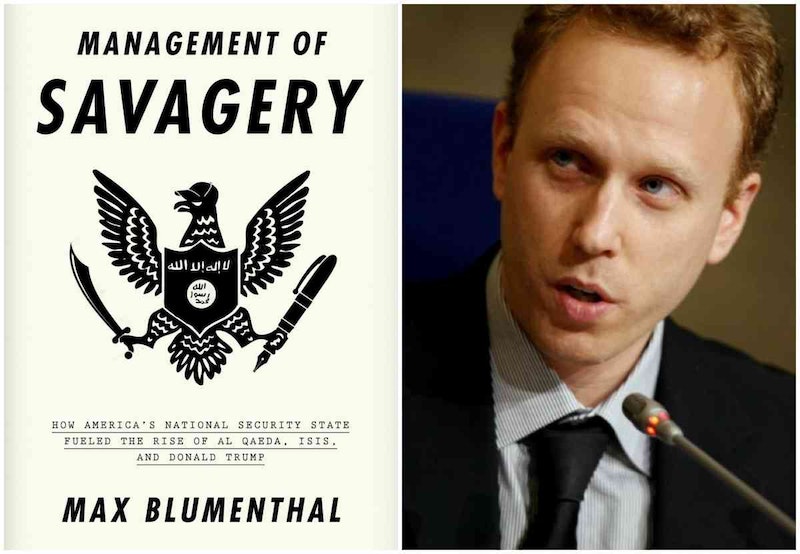 How surprised readers are by what journalist Max Blumenthal chronicles in The Management of Savagery: How American's National Security State Fueled the Rise of Al Qaeda, ISIS, and Donald Trump will depend on how close they are to the political center, and how much they'd rather be eating brunch. Libertarians, for example, know all about what President Obama referred to as the "shitshow" that was the “liberation” of Libya leading to Secretary of State Hillary Clinton's Benghazi fiasco, while leftists know all about how the same “liberation” led to black Africans held in open cages in Tripoli. You have to give Obama credit for his honesty: that may have been the first time a president ever told the truth about the National Security State agenda when he stated that his administration was attacking another country to, in part, "protect American business interests."

But Blumenthal, editor-in-chief of The Grayzone, walks us back much farther, claiming that Trump wouldn’t have happened without the 9/11 attacks, which is where the US foreign policy of “interventionism” went mainstream. Interventionists from our two major parties claim that America has a moral obligation to liberate people from dictators and to impose (or, “spread'”) democracy. This was first argued by the second Bush administration, cynically, then not-so cynically (or not?) under the Obama administration, particularly by then-Secretary of State Hillary Clinton and UN Ambassador Susan Rice: the heads of the State Department who argued for the bombing of Libya when the Defense Department leaders said it was a bad idea.

Blumenthal says 9/11 wouldn’t have happened without America's proxy war with the Russians in Afghanistan (which most people know now, if at all, through that cinematic classic, 1988's Rambo III)—back when Osama bin Laden was an American ally. For Blumenthal, this is the start of the lead up to interventionism and, again, Trump, because it's the start of US foreign policy, public or not, to destabilize foreign governments. Blumenthal doesn't go back as far as Vietnam, though surely that too is a section of the path to 9/11, as the first time the US flexed its muscles as the only world superpower. And lost.

This foreign policy of interventionism, argues Blumenthal, is shared by both major parties in America, even if the Democrats try to maintain a less bloodthirsty image. Remember that Obama took us from two “wars” to seven. For Blumenthal, the symbol of this was the funeral of Sen. John McCain, where everyone from Obama to Henry Kissinger, a former Secretary of State and probably most responsible for the mass deaths in Vietnam and Cambodia, to George W. Bush—all there to honor their "friend," who was the face of interventionism. (When this happened, my Twitter feed was full of jokes about the funeral like, "They should just lock the doors and begin war crimes trials for everyone inside." Most notably, President Trump was not invited. To paraphrase George Carlin, “It's a big club, and he ain't in it.”)

An even better example of how the Democratic and Republican parties have the same agendas, especially in foreign policy, is Hillary Clinton's advisor John Podesta, whose emails readers may remember being in the news, after being hacked in the run-up to the 2016 presidential election. What most people don't know is that while Podesta was advising Democrats, his brother Tony was advising Republicans, from the same company, the Podesta Group. Here's what Blumenthal says say about interconnections among the political and business elite:

The emails released by WikiLeaks from the hacked email account of Clinton campaign chief John Podesta provided an especially intimate portrait of a political establishment hovering above the lived experiences of average Americans and shuttling blithely between redoubts of coastal elitism. Throughout the email exchanges, Podesta can be found at "Hamptons and Vineyard money events," in Silicon Valley talking "philanthropy and social action" with Mark Zuckerberg, in Davos and back at the affluent island resort of Martha's Vineyard sipping "specially selected wines" with a rich investor at a "shoes optional" beachside party.

Along with his brother, Tony, John Podesta was the co-founder of the Podesta Group, a Washington lobbying firm that raked in millions each year from a stable of foreign government clients, including some of the world's most despotic, corrupt leaders. With a "fixture of Republican politics" at its helm, Jeb Bush deputy campaign manager Kimberley Fritts, the Podesta Group reaped over $1.7 million in a contract with Saudi Arabia's state-owned oil company and nearly $100,000 more from the Center for Studies and Media Affairs at the Saudi Royal Court.

The relationship with the Gulf states extended to the Center for American Progress, with a donation of $500,000 to 999,000 from the UAE embassy. Overseen by John Podesta, the think tank was farming out its staff to Hillary Clinton's presidential campaign, along with the foreign policy orthodoxy—the "Washington playbook"—they adhered to with almost religious dedication. (242)

One has to laugh at the media pushing conspiracies about Russia interfering in American politics when countries like Saudi Arabia (and Israel) so obviously do. But this was/is the appeal of Trump, however much he was lying: he portrayed himself as the candidate who would "treat the entire establishment—the mainstream media, Hollywood, and Washington's permanent bipartisan political class—as an opposition party."

What's at stake here is that, regardless of who won the recent presidential election, America, and the world, is in trouble. If Trump had won, the National Security State would’ve done everything it could to continue America's (management of) savagery with or without his okay, or even his knowledge. With the Biden win, the National Security State proceeds as normal, with full approval. Note how in this situation, Trump ended up being the lesser of the two evils. And, more Bidens—more national security insiders—mean more populists like Trump, only they may be smarter and better organized next time.

Despite the litany of horror in The Management of Savagery, and the risk any book of history has of falling into the “Then this happened, then this happened...” prose, Blumenthal is a clean writer: it's a fast read at 306 pages. Again, it's the surprises, the things readers thought they knew about world events and America's involvement in them. Really, “involvement” is too soft a word: more like manipulation. And again, it's both sides. Or, the two sides in power. Blumenthal doesn't offer solutions—I don't think he thinks it's his job—but the so-called two-party system in America isn't working, neither for most Americans, nor for most people in the world.