The best hope for 2021 is that the federal government is unable to accomplish much of anything. 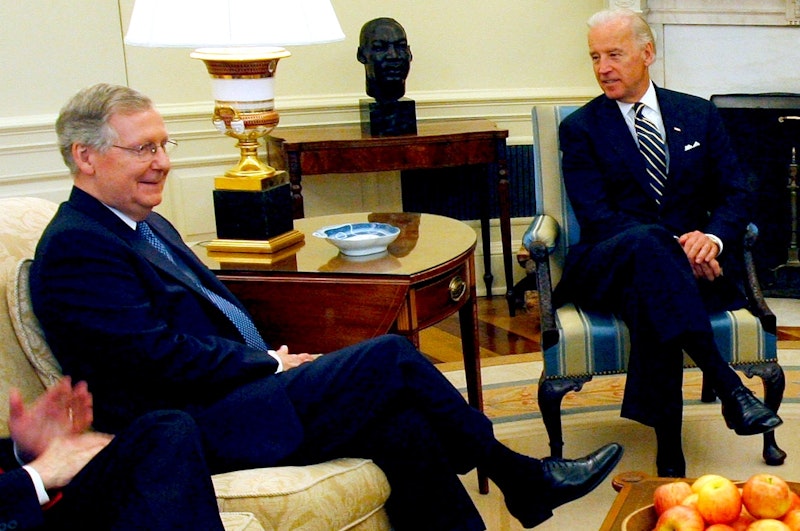 Mitch McConnell and Joe Biden at the White House, 2009

Once Donald Trump bolts from Washington, D.C.—probably at midnight on January 19, taking a pointer from Baltimore’s still-despised Robert Irsay—it’s likely, I think, that he’s finished as a public figure. It won’t be immediate: there will be talk of a new media organization (and maybe a dry run to take advantage of conservative outrage against Fox News), rallies (smaller and smaller) for a 2024 presidential run and a stream of nonsensical and nasty tweets about Joe Biden that will also diminish in reach. Maybe there’s a Marc Rich-like pardon of Trump for any and all crimes in the offing from Biden (New York prosecutors would claim territorial rights, but I’d guess the new president would have the last word), although that’s a long shot. (But what a splendid twist!)

I wonder if the online #TheResistance will disband (not that it ever banded in the first place, with no leader), now that Trump’s finished. After four years of pretending they were cast members of Casablanca, with the wrap party on Nov. 7—and we’ll see if any surge in COVID cases come from those multi-city celebrations, although some might argue, not completely facetiously, that only the MAGA millions are susceptible to the virus at “super-spreader” events. I’ve discussed with my two sons the effects of a Trump-less America will have on major media organizations and social media sites.

My bet is that Twitter usage falls by 10 percent (significant; my boys see no real slippage) in the absence of Trump-induced hysteria on all political sides, and Facebook will mostly return to an outlet for baby pictures, grandpa’s obituary, class reunions and local queries about finding the best gutter-cleaning or landscaping company. Already on Twitter, you see more posters, seeking clip-clops, asking questions like “What was the first band you saw live,” and who doesn’t have an answer for that? I replied once, but not the next 100 times.

As I’ve argued for several years, one of the prime beneficiaries of Trump’s turbulent administration was The New York Times Co., whose market valuation soared after the “Orange Man’s” election, as did digital traffic and subscriptions. (The Washington Post will continue unfettered, as long as owner Jeff Bezos keeps the newspaper in his portfolio; and there’s no reason he won’t, considering he bought the company for peanuts and needs that D.C. beachhead. It matters not a whit that the newspaper he owns but probably doesn’t read occasionally bitches about Amazon/Whole Foods. Bezos is impervious to criticism.)

But will readers who bought three- or sixth-month digital subs to the Times find that a reasonable expense now that succor from like-minded columnists and reporters is no longer necessary? I doubt it: and I’d suspect that the more savvy day-traders will short Times Co. stock around late-February or March, once Trump’s House of Mirrors has wound down. Conversely, as always happens when a different party takes the White House, conservative-leaning outlets like The Wall Street Journal, National Review and The Washington Examiner can expect a spike, as well as trash like Newsmax and Breitbart. I’m also not a fan of American Mind (aside from my friend Emina Melonic’s essays) and The Federalist, but to each his own.

Aside from Biden (for however long he’s physically able to remain as president), there’s little question that Sen. Mitch McConnell will be the most powerful man in Washington, providing he can keep the GOP Senate chamber. I’d be very surprised if “Cocaine Mitch” isn’t right now in serious negotiations with more than one centrist Democratic Senator to switch sides—once again, West Virginia’s Joe Manchin is the most obvious target, and who knows, if the deal is sweet enough, maybe taking over the Judiciary Committee (apt now that Lindsey Graham could be in dutch with Mitch), he’ll bite—which, if successful, could be announced the day after the twin Senate run-offs in Georgia on Jan. 5.

McConnell, who, like fellow septuagenarian Paul McCartney, looks sort of like a scarf-knitting grandmother, is in fact ruthless, and no matter what your opinion of his tactics and beliefs, he’s the most powerful Senate Majority Leader since LBJ in the 1950s. I thought his no-consideration (not even a pro forma hearing) of Merrick Garland for SCOTUS in 2016 was a risky play, but it worked out. Far more impressive was his almost instantaneous confirmation of Amy Coney Barrett last month, no doubt put on the express elevator for two reasons: one, hedging against a Trump loss; and two, a potential sympathetic judge to the expected litigation of the Nov. 3 election. That litigation has gone nowhere—I’ve no doubt fraud was committed on both sides (the GOP supremacy in supposedly purple Texas does seem a little fishy)—partly because Trump, naturally, wasn’t prepared with a competent battery of lawyers and also he had too many fronts to battle.

I have the highest regard for Ira Stoll (editor of FutureofCapitalism, syndicated columnist, and founding managing editor of the great print edition of The New York Sun—disclosure, I published around 100 pieces for The Sun from 2002-2007), but I think he’s mistaken in his Nov. 16th online Sun column, which assesses the political landscape after the Georgia Senate run-offs.

He writes: “If Republicans hold the chamber, then a President Biden can forget about doubling the capital gains tax, adding a ‘public option’ to ObamaCare, packing the Supreme Court, banning fossil fuel, appointing Elizabeth Warren Treasury Secretary, or other moves that might thrill the Bernie Sanders-Alexandria Ocasio-Cortez wing of his party.

“A Republican Senate could be grim for Republicans, too. Mr. Biden would be able to blame every problem of his presidency not only on the chaos he was left by the preceding administration, but also on Republican obstructionism… For anything bad that happens, Mr. Trump and Majority Leader Mitch McConnell will get blamed.”

One, “obstructionism” has worked for McConnell. He doesn’t fear it, and I’d welcome the gridlock of a divided government, since less would get done, aside from a pork-less COVID stimulation package. Two, should the Democrats prevail in both Georgia races and control the Senate, I doubt former Sen. Biden (D-Big Business/Credit Cards) would tap Warren for Treasury or propose anything but the tiniest fig leaf to the Ocasio-Cortez faction.

Biden’s a centrist: he might raise capital gains taxes (filled with loopholes), and will jack up taxes—just as Trump would’ve—not just on those that earn more than $400,000 a year, but the Top 25 percent, because after COVID-induced spending of 2020, the till is empty. But “packing the Supreme Court” and “banning fossil fuels”? That’s not Biden; and when Kamala Harris takes over, she won’t deviate from the DNC centrist position.