Biden’s Down for the Count

It’s a long way until July for the presumptive front-runner. 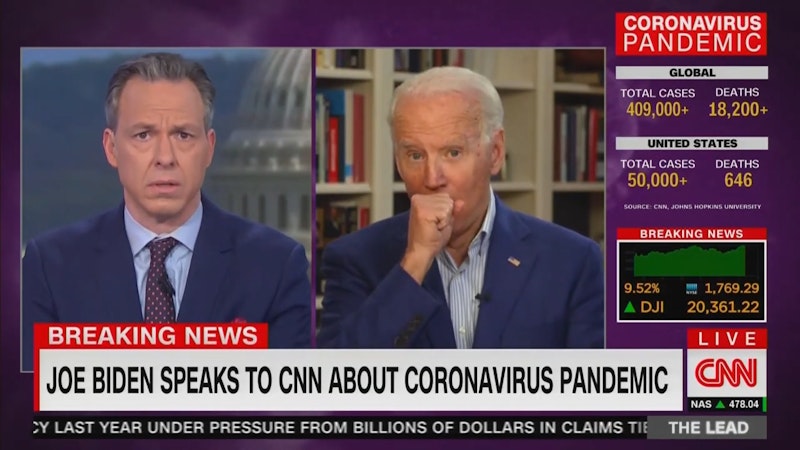 Where have you gone, Joltin’ Joe O’Biden? A nation turns its lonely eyes to you. Woo-woo-woo.

I jest in paraphrasing Paul Simon’s “Mrs. Robinson” from 1968, and while the “Is Joe Biden Dead?” memes continue apace on social media, it’s an important question to consider. As I noted last week, I’ve little doubt that the cabal running the Democratic National Committee (DNC) will conspire to deny the faltering Biden the presidential nomination this July in Milwaukee. And Bernie Sanders is out of luck as well; same for the egregiously self-aggrandizing Elizabeth Warren.

Again, Amy Klobuchar is a safe candidate; so is Ohio’s Sen. Sherrod Brown; less so for Pete Buttigieg (maybe he’s CIA-approved, maybe not, but it’s still to early for Americans to vote for an openly gay presidential candidate); and now Andrew Cuomo, until last month the unpopular governor of New York, is making a splash. Cuomo’s a hothead, though, and in trying to navigate the nation’s worst statewide virus catastrophe is bound to make enemies. And he has baggage (like his late father: in the Trump age, it’s mild, but the then-young Cuomo did authorize “Vote for Cuomo, Not the Homo,” in his father’s unsuccessful run for Mayor against Ed Koch in 1977.)

However, let’s entertain the idea that Biden really will put up a fight, and maybe win, at the Democratic Convention. In that case, why isn’t he holding meaningful, meaty daily press conferences (not at his home)—propped up with a team of scientists and academics (and given his lifelong career in politics, he, or more likely his staff, could assemble such a group in a matter of days)—every day, after Trump’s daily briefings. In the U.K., especially at a time of grave uncertainty, the “shadow leader” would automatically embrace a bullhorn. Since so many remaining primaries are on hold, it makes political sense—and not to be entirely cynical, humanitarian as well—for Biden to prove his case to the DNC puppet masters, and more importantly to Democrats in particular, and Americans in general.

The odds are low, but if Biden could project what he’s boasted for the past year—“prepared from day one”—he’d bat away the naysayers who claim he’s half-senile, pumped up on amphetamines, or just plain old and exhausted, and steal some of Trump’s thunder, bluster and boasting. He doesn’t have to ape Sanders’ far-left agenda, just lay out a center-left program, and proposals for slowing the coronavirus and in the aftermath of that, a 10-point program on how to fix the economy and get Americans back to work. Obviously, he wouldn’t be correct on everything—trial balloons usually pop—but the image of strong leadership would cement his standing as a very formidable foe for Trump this November.

That’s what a Shadow President would do.

I doubt this will occur: Biden really isn’t up for it, and I’m not sure he would’ve been 30 years ago. He’s a political hack, and aside from Harry Truman, I can’t think of a machine pol who’s risen to an historic moment. Additionally, I’m not sure how the Biden team can prevent embarrassing lapses from the candidate, which have become a running joke. The latest, and a rib-tickler it was (and those are the facts, Jack), came on Monday when he called Massachusetts Gov. Charlie Baker “Charlie Parker.” Guess he was thinking a Bird in the hand and we’ll bebop all night long at the Apollo with those cool, cool “negroes.”

Meanwhile, a few Democratic journalists are pushing back against their colleagues for broadcasting Trump’s press conferences. I read Press Think’s Jay Rosen’s long media complaint, and while most of it was the same anti-Trump rhetoric as he and others have repeated since November, 2016, he did make a point that I, to my embarrassment, hadn’t even thought of. Trump, because of social distancing, is using his press conferences as a substitute for the campaign rallies he’d be holding absent the virus. That makes sense from Trump’s point of view—after all, the media, despite protestations, love writing stories and fulminating on cable news about Trump—but Rosen and The Washington Post’s Margaret Sullivan are saying enough is enough, and proposing no live coverage of the daily press conferences/rallies.

Kindly permit some immodesty: I’ve written, time and again, that if the media was so disturbed by Trump’s blatant lies, half-truths, crass behavior and general boorishness, there was no rule they had to cover it. A few years ago, I said that “reporting” on Trump’s tweets was playing into the President’s strength. The American public dislikes the media as much, or more, than politicians, but lampooning Trump’s ungrammatical tweets and outlandish claims is fun, and, as is said, sure beats working at a restaurant (especially now). So I expect the words of Rosen and Sullivan will be praised, and then ignored. It’s just not possible for the explainers at Vox to largely ignore Trump; and where would David Brooks, the Man Without a Soul, be without Trump? Double that for Dana Milbank and Chris Hayes.

Sullivan wrote, as if anyone was paying attention: “Radical change is necessary: The cable networks and other news organizations that are taking the president’s briefings as live feeds should stop doing so… There’s a strong counter-argument to be made, of course: that the press shouldn’t be in the business of shielding the public from the president’s statements—no matter how misleading, xenophobic or damaging. It’s a persuasive argument, and one I wish I could still believe in.”

It’s not incidental that Sullivan works for the Post, owned by Jeff Bezos—his lobbying beachhead in Washington, D.C.—and I’d guess she could have her high-salaried job for as long as she desires. But for other newspaper websites, and more importantly, cable stations and their affiliates, covering Trump is a matter of dollars and cents. Skip Fox, and think about MSNBC: if that station boycotted Trump’s press conferences/rallies for more than a “solidarity” week, how much advertising would be lost in sudden economic desert? Who’d listen to Rachel Maddow and her cohorts if they ignored Trump?