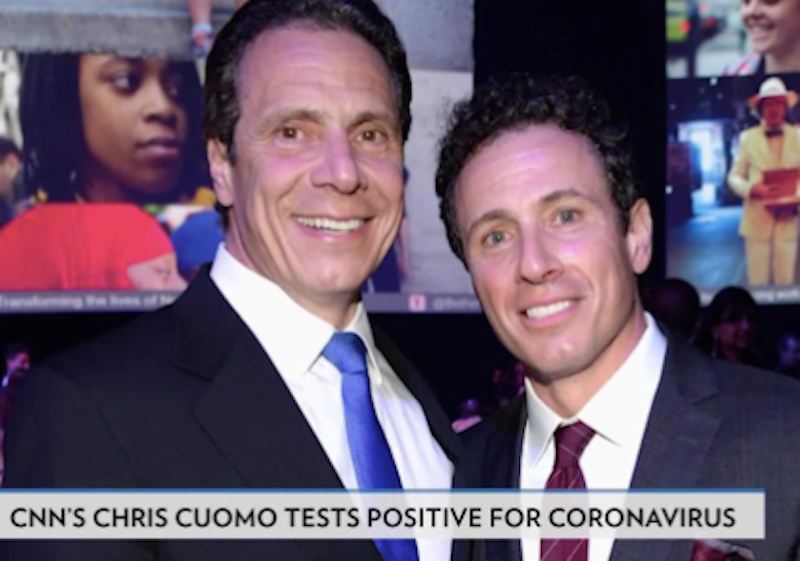 The right and left each champ at the bit to take down some aspects of your freedom, though they have different preferred rationales, often deployed with feigned reluctance as a necessary means of staving off the other team’s attacks. The “for your own protection” mantra provided by public health concerns, or a big earthquake, is an almost-perfect way to attack individualism without setting off the right-wing or left-wing tribal alarms that normally at least keep each tribe on guard against incursions by the other.

Yet, very obviously, once a crisis like CV presents the opportunity, each tribe trots out the list of its favorite restrictions, likely ones it has championed for decades, whether in times of crisis or times of calm.

Teen Vogue suddenly realizes (after apparently pushing communism, yes, literal communism on young readers for several years now) that CV is the perfect opportunity for the world to break with its capitalist past and embrace full communism.

Reporter Chris Cuomo testing positive for CV (which doesn’t mean he’ll necessarily become very ill—so far it appears about half of carriers have no symptoms at all, though the stats are changing all the time) will of course be the occasion for fawning portraits by the media not just of one of their own but of his brother, Andrew, who just happens to be governor of New York and suddenly a talked-about possible replacement for or accompaniment to Biden on the Democratic ticket.

Chris Cuomo testing positive will also probably enable CNN to go a bit longer reporting mainly on New York City side effects of the outbreak without feeling guilty about spotty coverage of the heartland and the rest of the globe. Win-win-win!

One reason a health crisis is ripe for political exploitation is that people can easily pretend the value of health, like the supposed value of life, is infinite, and so any attempt to tally costs and benefits or weigh competing concerns goes right out the window. People pride themselves on saying so. Lives are at stake and you’re talking about whether this will cost $6 or $6 trillion, you heartless monster!

(As if impoverishing society by $6 trillion causes no loss of life in the long term, in forms ranging from buying less safety equipment to investing in fewer new life-extending technology startups, not to mention those hardship-induced suicides about which Trump rightly warned.)

People love to argue about the things on which they claim to place infinite value instead of the things subject to normal, rational calculations (though in practice they’re rarely willing to spend infinite dollars of their own on anything at all). It’s not just in a pandemic that this happens. Try convincing either an ardent pro-lifer or an ardent pro-choicer that abortion is a tricky issue on which compromise might be warranted, for instance, what with fetuses being gradually-growing organic things of ambiguous moral status with only partial nerve-endings, etc. That’s always a fun conversation that ends in happy agreement all around.

On many issues, the easiest way to feign resolution is the age-old method of pretending complicating factors don’t exist.

So, if, say, you’re a leftist and want quarantine zones, you pretend no voluntary methods of limiting the spread of a plague exists. Firm, brutal governance now! Maybe you even seize this moment (as I notice several writers already have) to attack libertarianism explicitly, declare capitalist individualism a dead philosophy, maybe imply America was never about freedom anyway, etc., hooray for the planning agencies, and so on.

If you’re an unusually stupid libertarian, by contrast, maybe you pretend the whole disease is a hoax and that no one’s even showing up sick in hospitals. Presto, no need to even worry about quarantine issues.

But it’s not a violation of libertarian rules (which say you can’t use another person’s body or property against their will) to say that you’re forbidden to spew potentially-deadly germs on unwilling people. The most red-blooded and independent-minded of libertarians would object strenuously if, say, the Chinese government said it really did create this disease as a bioweapon and negligently let it loose while hoping not to do so unless a final, ultimate war against capitalism was at hand. Yet a coughing Spring Breaker can kill you just as dead as the hypothetical communist scientist, and there’s no ideologically-binding reason you must passively accept either attack, even if one is merely stupid and negligent and the other is calculating, world-conquering, stupid, and negligent.

Whatever the best length of time for us all to avoid each other, or perhaps for a longer period of time to avoid the weak or elderly, one need not leap to communist rationales, nor for that matter mildly social-democratic ones or populist-nationalist ones, for saying there are limits to the risks we can morally and legally impose on unwilling other individuals. Even private police, in a perfect anarcho-capitalist world, could tell the sick, “Keep Out: Private Property,” words that should be music to the ears of any intellectually-consistent fan of quarantines.

Just remember, the end goal—I hope—is keeping individuals both free and alive, not cynically and unnecessarily destroying their freedom with the flimsy excuse that you couldn’t be bothered to think of any other way to preserve their bronchial passages.