Being and Nothingness: Donald Trump and Hillary Clinton

Can you name a single rock-solid Clinton position? 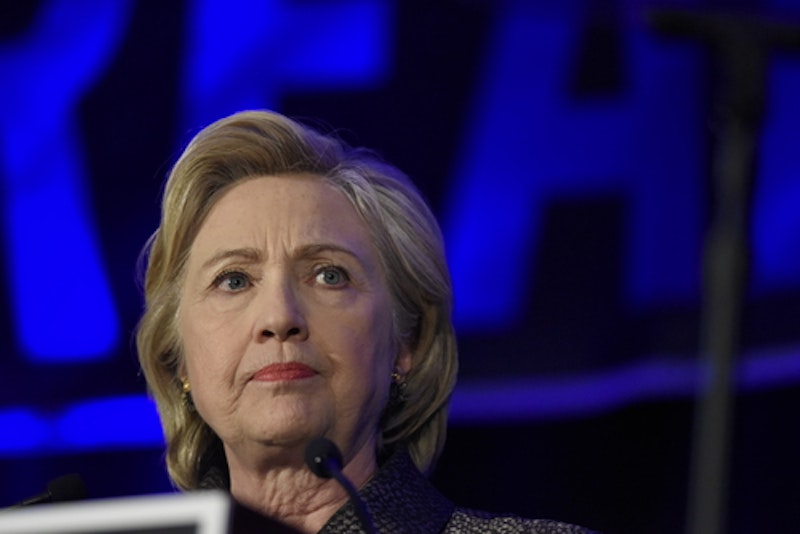 St. Augustine, trying to explain the apparent presence of evil in a universe created by a perfectly good and all-powerful deity, denied there was such a thing as evil at all; he said evil was an absence or hole in being, that evil is merely non-existence.

I think he was wrong about that, and I think that evil very palpably exists. You can tell this because it spends all day tweeting and doing interviews and holding rallies. On the other hand, Augustine had a point, because there’s also a form of evil that consists in not consisting of anything.

If there are any Hillary Clinton supporters, I have a challenge for them: show me some of the positions she has taken since, say, 1991, that were contrary to opinion polls. Or, show me a single one.

The dominant Democratic politicians of the last three decades have been nothing but exquisite barometers of the polls. In 2004, John Kerry—the former leader of Vietnam Veterans Against the War—couldn’t bring himself to oppose, or indeed to endorse, the war in Iraq, because the polls were sitting right at 50/50. Hillary's position on the war matched the polling numbers at every moment in the whole process, from enthusiastic endorsement when it was riding high to deep "regret" (while blaming other people) when she was running for president in 2008. By then, the war was polling miserably among Democrats in the primary season.

I want you to take this in: Hillary Clinton endorsed blowing up a half million people, including thousands of Americans, because it was polling well, because not to do so would put her eventual rise to the presidency at risk. She endorsed killing half a million people, and then half-assedly regretted that endorsement, in both cases out of sheer self-aggrandizement.

If necessary, I’ll get into the weeds of the miserable “intelligence” that gave her and others their excuse. But I say that this is perfectly obvious from her whole career. Her healthcare initiative was polling at almost 70 percent when she proposed it; as it sank she forgot about it. The great programs of the Bill Clinton administration, such as “Don't Ask, Don't Tell,” which manacled people in a closet by law, or mass racial incarceration in the “war on drugs,” came at the behest of pollsters.

Here is a beautiful example. First, the Pew Center's history of polling on gay marriage and second, Politifact's history of Hillary's "evolution" on the issue. She endorsed it, as a defense of love and a matter of principle, at the precise moment it climbed into the 50s.

And while I'm at it, I challenge Hillary supporters to produce some of the positions she’s taking now—if, indeed, she’s taking any positions now—that represent any sort of political risk, or register any conviction. She will favor killing you personally when your personal death gets to 55 percent.

I don't know how or why or where John Kerry or Hillary Clinton lost themselves, and unlike Augustine I don't necessarily believe in God's perfect justice. But were I Augustine, I'd predict that safety-first self-interested mediocrities of this quality, as surely as real moral monsters, will end up being spit-roasted in eternal hellfire by a gleeful Satan.