A good time for a truce. 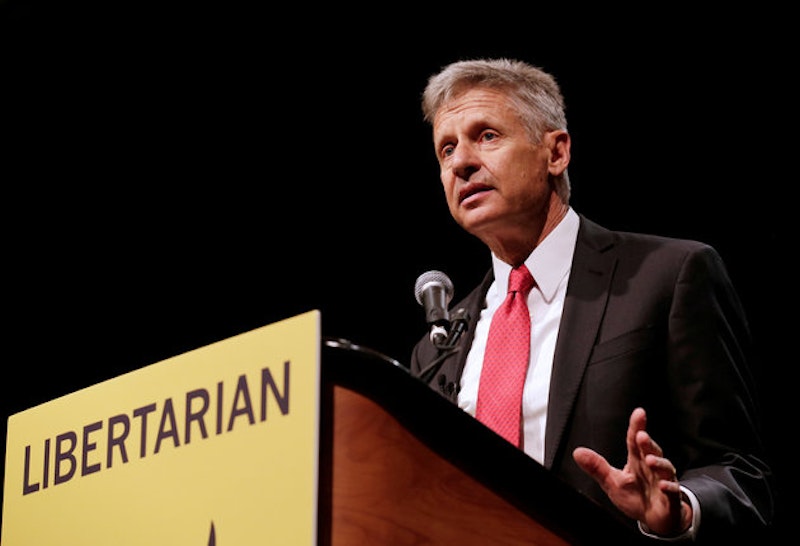 It became official this weekend. Former governors Gary Johnson and William Weld are the Libertarian Party presidential and vice presidential nominees—both intelligent, moderate libertarians who were liberal-Republican in tone during the successful two terms each spent in office (in New Mexico and Massachusetts, respectively).

What a great time for a politically-exhausted and deep-in-debt U.S. to take a step back from the brink, blink its eyes for a moment, and choose the only reasonable path on offer between the criminally corrupt Scylla of Clinton and the double-talking egomaniac Charybdis that is Trump. Less spending, less war, less intrusion in our personal lives. Go for it, America. It’s your big chance, at last.

I’m not asking disaffected liberals and conservatives to abandon all their political dreams, either. We all get something from a Libertarian victory—and we all have to compromise a little, even us libertarians. Johnson and Weld are not the hardcore ideologues some of us anarcho-capitalists might prefer. But this is about as close to victory as we’ve gotten—a general impulse to keep government out of bedroom and pocketbook alike—and I hope we won’t throw away the chance, even if the best we can do come November is draw a great deal of new attention to the idea of libertarianism by getting 15 percent or so of the vote.

And each major party is warning that the other major party will be put in power if voters defect to Johnson/Weld, so I say, why worry about it? Maximize that libertarian signal and let the chips fall where they may. At the very least, each major party would thereafter have to worry about losing votes due to its failure to be more libertarian. In the future, they might thus feel obliged to ditch a tax, regulation, domestic spying program, or Cabinet agency for once. They’re not gonna shape up any other way.

I’ll strive to behave like a gracious host if disaffected major-party voters come to libertarianism for a new home. For starters, I should politely direct them all to my book Libertarianism for Beginners for orientation purposes. Perhaps the whole electorate should check it out, come to think of it, just to prepare for what may lie ahead.

Even among the cantankerous political elite and pundit class, I think this might be a good time for a truce. Let past conflicts be forgotten, if, say, Trump-averse Romneyites and columnists such as William Kristol and Jennifer Rubin are willing to look at Johnson and Weld with fresh eyes. I will not dwell on the past if they’re nice, not even after getting banned from one major conservative media operation’s building, but more about that another time, perhaps.

Longtime libertarians could set a good example for newcomers by toning down the infighting a bit, at least for a few months. On the other hand, with perhaps the most “respectable” ticket the Libertarian Party has ever had now on offer, I admit I may get a little hostile if some libertarians who’ve praised Sanders and Trump in recent months persist, against all rationality, in doing so. That may have made sense when you were desperately trying to determine the lesser of two evils (three counting Clinton). It makes none with Johnson and Weld now an option—as I hope Clinton-boosting P.J. O’Rourke, for example, will soon admit.

Johnson and Weld are just moderate (and experienced) enough that I think they’re America’s best option not only by libertarian standards but by liberal, moderate, and conservative standards. Vote accordingly, if you insist on voting, and we may yet make it to 2017 without civilization collapsing.