Outrage and Ambivalence Over the President's Tax Deal

"Is this Barack Obama's Bush Sr. moment? Is his tax deal a moment of cowardice or courage? Bold leadership or craven capitulation?" 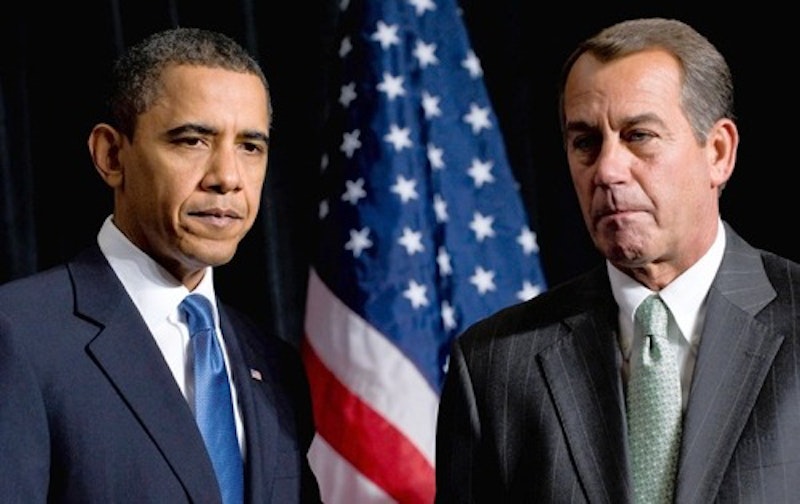 I’ve tried to absorb many different perspectives, and the only clear answer has come from the left: hope and change are dead. But otherwise, public opinion is either favorable or mixed. A Gallup poll shows that two-thirds of independents and more than 50 percent of Democrats support extending tax cuts for everyone. This suggests that most Democrats are moderate, and it also supports the claim that liberalism is not a serious force in American politics—if matters were otherwise most Democrats would strongly oppose such an obviously irresponsible policy.

On the right, there is some gloating over Obama’s palpably diminished power and the infighting among Democrats. But many feel, amazingly, they didn’t win enough. One need only look up Rush Limbaugh and Fox News. The former, as usual, is angry that the unemployed will not have to starve to death and views the Republicans as the ones who have caved:

Limbaugh’s attitude is characterized by classic conservative orthodoxy, which holds that the unemployed are lazy and unwilling to look for work. If only we would stop rewarding them with “government handouts” they might finally get off their asses and find jobs. In ordinary times this is callous and inaccurate enough, but in the midst of a depressed economy, where there are roughly five applicants for each available job (3.4 million job openings for 15.1 million unemployed Americans, according to the Bureau of Labor Statistics), Limbaugh’s sentiment is pure evil. Never mind, is the glib reply, so long as we continue to cut taxes for people who don’t need them employment rates will improve.

But in the real world there are many different sane perspectives, though we may disagree with them.  Three New York Times Op-Eds are worth checking out. First, Jon Meacham, author of American Lion: Andrew Jackson in the White House, takes the position that Obama’s compromise is an act of courage comparable to George H. W. Bush’s decision to raise taxes in return for a “pay as you go” policy in which further spending had to be compensated with cuts or revenue increases. It can be no coincidence that Bush’s deal brought balanced budgets throughout much of the 1990s, even though his base abandoned him in reaction to his betrayal and killed his re-election bid.

David Brooks likewise thinks, “the White House negotiators did an outstanding job for their side,” since they extracted significant concessions such as “unemployment insurance” and a “college scholarship provision.”

Paul Krugman, however, offers an unanswerable rebuttal to these interpretations. The stimulus elements of the deal—such as unemployment benefits (which have to be pumped into the economy to pay bills and buy food) and temporary payroll tax cuts—would expire at the end of 2011, leaving us mainly with continued tax breaks for the wealthy (who are at least as inclined to save rather than spend) in 2012. This has serious political implications because Krugman predicts that we’ll see the same effects produced by Obama’s first stimulus package, in which the economy receives an immediate boost that fades during election year (in case you’re wondering, he was right the first time, when he called the Recovery bill too small). And with the midterm elections fresh in our minds, it’s easy to presume 2012 will turn out the same way.

I’m mixed on the issue. The Bush Sr./Obama analogy seems apt, especially since I consider Bush’s compromise a classic profile in courage moment. But here’s my problem with the comparison. Bush’s deal, also hatched during a period of anemic growth, was intended to create long-term prosperity for America, which could be attained only by enacting policies that contradicted his ideological convictions of trickle-down economics.

Obama’s maneuver, however, seems just plain irresponsible. Although it is in truth largely consistent with his broader economic approach—one characterized by loose fiscal policy revolving around tax breaks and deficit spending as temporary measures in the face of an epic recession—there is no justification for continuing the Bush tax rates for the top two percent, especially considering that during the 2000s such an approach failed, as budget deficits ballooned, job growth was predicated on a housing bubble, and the gap between rich and poor deepened dramatically. In addition, even Alan Greenspan has spoken out against continuing the cuts. As such, unlike with Bush, the short-term stimulus Obama seeks can be attained only through measures that counter the opposition’s agenda, which also features lower estate taxes for the super rich. In other words, the conservative concessions he made to forge this deal in no way advance his goal of sparking a quick stimulus, whereas the liberal aspect of Bush’s compromise helped him achieve his aims.

Nevertheless, Obama has now demonstrated an undeniable willingness to work with Republicans, and, as the aforementioned Gallup poll suggests, most moderates have taken notice. This may open up the possibility for future bipartisanship, though I wouldn’t count on it, especially since the GOP continues to obstruct the Dream Act and the START treaty with Russia and has blocked repealing Don’t Ask Don’t Tell, along with aid for 9/11 heroes. And nobody should be surprised if the Republicans end up voting against the tax deal, since such an action would continue their long trend of rejecting their own policies to undermine Obama. Still, the deal would likely stimulate the economy, which has been the President’s top priority all along.

I suppose the most salient issue for me is not just what the President has done so much as how he has done it. Judging by his press conference last week, for the first time I’m not convinced that even he believes he’s made the right choice (and if he does that hardly makes matters better). But what’s most disheartening is that, on top of failing to even mention the 99ers in the package—the millions of people who are out of work for over 99 weeks and now doomed to rot, much to the delight of Rush Limbaugh and co.—Obama has set a terrible precedent. His admission that he can’t muster enough political will to challenge Republicans and force them to accept his preferred deal reflects how far his confidence and public sway have sunk. Why can’t he do something akin to what Bernie Sanders is doing and rally support?

Considering this, it would be foolish to trust his pledge to fight for ending the excessive tax cuts in 2012, an election year. And furthermore, conservatives will feel emboldened in their efforts to cap budgets and thus choke off entitlement programs, among an endless array of disgusting items on their agenda.

This is more blackmail than compromise, but it’s still difficult to determine if good leadership calls for settling for such a lopsided deal or for a fight in the name of fiscal discipline and principle by letting the tax breaks expire and thus hurt most Americans in the short run and risk damaging the recovery. Even though the Republicans would be the ones to blame if the latter were to occur, since they blocked the Democrats’ proposed legislation to extend tax cuts for all but the rich, Obama is nonetheless the president, and as the ultimate authority it’s up to him to protect the American people.