A Subject of Astonishingly Small Importance

The New York Times, out of touch and incoherent. 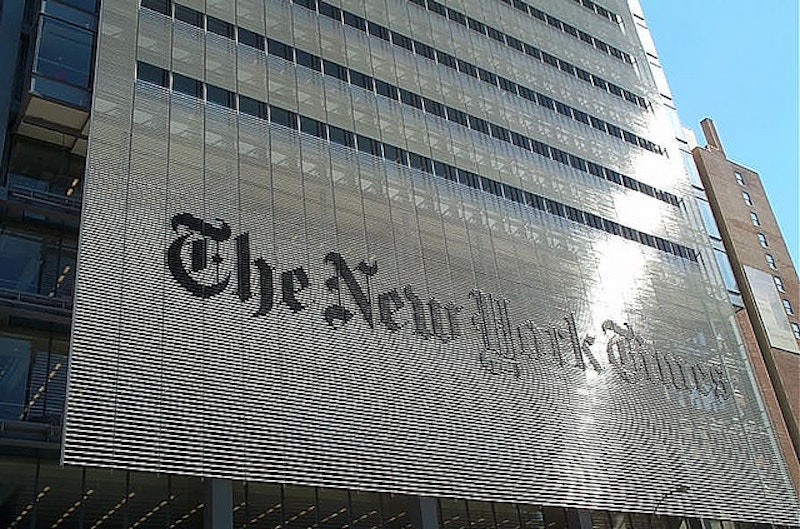 I always enjoy reading Arthur Brisbane, the recently appointed public editor of The New York Times. Brisbane supposedly acts as a representative of the Times’ readership, an editor who explains the inner workings of the paper and who “receives and answers questions or comments from readers and the public, principally about articles published in the paper.” He receives and answers these questions in the manner of the headmaster of an old and prestigious boarding school, deflecting and minimizing readers’ concerns with bemused, avuncular condescension. I especially enjoyed his comment-free publication of the society editor’s blithe defense of the Times’ Weddings section (open to all, but reserved for “those who seem destined to play a role in advancing the sciences, law, the arts, engineering, communications and other fields”).

On Sunday, December 12 the Times published a column by Brisbane. Headlined “Readers with Plenty to Say” the column described the paper’s culture of online comment moderation. The Times editors feel that un-moderated online comments are “less than Timesian” (really!), and that they therefore need to “ filter out personal attacks, obscenity, vulgarity, commercial promotion and other bad things while filtering in thoughtful, diverse and to-the-point comments.”

Watching the Times engage with the Internet is like watching an ancient bearded orangutan engage with an iPad. I cannot disagree with a policy of weeding out commercial spam, but I also can’t see how a policy of deliberate censorship will “filter in” diversity. Is the Times so out of touch, or so fearful of litigation, that its editors quail at the idea of allowing teenagers to post racist drivel, obscenity or incoherent irrelevance in their comments section? Have they seen the rest of the Internet?

Brisbane’s argument does not persuade me since it rests on abominable pride (“less than Timesian”) and a prissy misunderstanding of the nature of the Internet and the value of reader commentary—one cannot “capture the full value, and loyalty, of an engaged readership that isn’t content merely to read,” by rejecting some of their engagement as “less than Timesian.” Lately I have been re-reading Orwell’s Politics and the English Language, and it struck me that Brisbane’s argument suffers from cloudy writing almost as much as it suffers from essential stupidity. Orwell famously argued that lazy writing usually betrays lazy thought, and Brisbane’s writing in this piece is noticeably lazy. Here is a list of the clichés than he employs:

“…or just to find self-expression inside this safe house on the Internet.”

“There is no hard and fast maximum number of comments…”

“…comment moderation is handled differently in different parts of the Balkanized Times empire.”

“Having opened Pandora’s box of comments…”

The article is a mere 1100 words. Brisbane’s writing suffers other ills than clichés—he relies on the passive voice, and he produces some paragraphs so filled with tangled metaphors that they verge into nonsense or self-parody:

I delve into their world this week because I now understand that the reader commentariat is a vibrant and often disgruntled community, peopled by highly motivated writers who say they are moved to criticize, to challenge the ‘censors,’ or just to find self-expression inside this safe house on the Internet.

Brisbane need not tell us why he writes this article, especially if his argument rests on the idea that the subject is interesting. Since this is The New York Times we will give him the benefit of the doubt and assume that he has a good reason and that what he reports will interest a broad audience; we may therefore eliminate the first portion of this paragraph, bidding a bittersweet farewell to the memorably infelicitous phrase “a vibrant and often disgruntled community.”

This leaves us with the “highly motivated writers” (so different than merely regularly-motivated writers, or just writers) and their self-reported desires. We might reconstruct this paragraph as: “Comment writers say they are moved to criticize, to challenge the ‘censors,’ or just to find self-expression.”

This leaves Brisbane 33 extra words and does not meaningfully reduce the content of the phrase. Next:  “What is clear to me, though, is that the considerable grumbling arises because The Times has created an online feature that is extremely appealing to many readers.”

Although I would enjoy a word-by-word derision of this sentence I will simply offer a leaner version that eschews the condescending word “grumbling”: “Complaints arise because the Times has created an online feature that appeals to many readers.” Wait a second! That phrase doesn’t really make sense! Readers are complaining because the Times has created a feature that they like? I must have erred when I edited it—mea culpa.

Next: “Many other news sites offer comments areas, but because they are not human-moderated, they are deluged with snappy tripe that scrolls on endlessly.”

Ahem. “…deluged with snappy tripe that scrolls on endlessly.” What a powerful, easily visualized metaphor! Why, I can practically see a flood of sass-talking (or perhaps be-toothed and bitey? Pithy phrase-spouting?) entrails washing literally without end over the Internet comments areas of other news sites.

Next:  “A paragon of comment moderation, by all accounts, is Tara Parker-Pope, whose popular blog “Well” generates a continuing conversation between her and commenters."