When Will the Anachronistic Newspaper Editorial Die?

The Baltimore Sun’s mealy-mouthed opinion about marijuana legalization is one more argument for euthanasia. 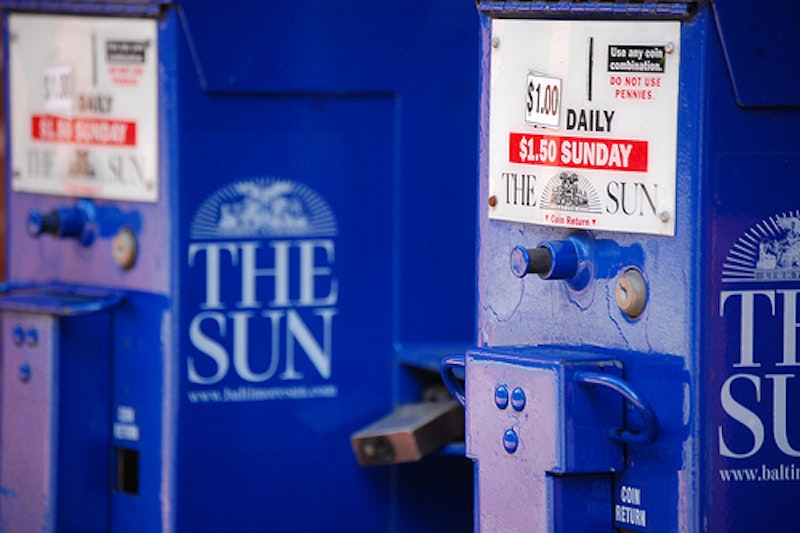 Long before newspapers got trapped in digital quicksand, unsigned daily editorials were on life support, written more out of obligation—or less charitably, vanity—because that’s what was always done. Never long on style, with the exception of The Wall Street Journal, the on-the-one-hand, on-the-other briefs were (and are) so cautious that they made the penny-stock agate look vibrant by comparison. Well-informed readers, as well as reporters, pled in vain that the antiquated tradition be discontinued; other subscribers didn’t even think about the question, simply ignoring that section of the paper.

I was reminded of this a week ago upon a rare foray into the comatose Baltimore Sun’s “Opinion” pages, in which this or that stuffed shirt offered a view of marijuana legalization, a countrywide movement that’s moving as fast as the equally sensible legislation over “permitting” gay marriage did a few years ago. I think the last time a Sun editorial actually made a difference was in 1986, when the paper endorsed gubernatorial candidate Harry Hughes over his far better-known rivals in the Democratic Party. Hughes, not particularly distinguished, won the election and The Sun was justifiably given due credit. But that was nearly 30 years ago, and I can’t think of a single reason the struggling daily—which owner Tribune Co. is trying to sell—continues the practice.

In any case, the editorial cites a Sun poll that showed 58 percent of voters “do not support putting people in jail for using the drug recreationally. It no longer appears to be a question of whether the state will relax its marijuana laws but how soon and how much.” And, then, inevitably, “We urge some caution.”

The writer details the arguments of legalization proponents, and gubernatorial candidate Heather Mizeur is one of them, such as the crowding of jails for victimless crimes, the disproportionate number of minorities nabbed for the “crime,” and, like the end of Prohibition, smashing the black market run by violent cartels. It’s also noted “Maryland has the third highest arrest rate for marijuana possession among the states.” The enormous benefit to the state from tax revenues of legalized pot isn’t even mentioned. Money’s grubby, I guess.

Nevertheless, Baltimore’s figurehead “paper of record” seizes on the “troubling uncertainties posed by legalization.” Would under-age kids have more access to the drug and, presumably, trod down a path to ruination? As if teens who are so inclined have any difficulty procuring pot under the status quo. Also “troubling” to The Sun is the potential increase in car accidents at the hands of stoned drivers. Unlikely, in my view, and certainly not nearly as dangerous as the preponderance of morons who text and yak on smartphones while behind the wheel. Finally, would the current drug gangs “become more dangerous as they fight for a share of a shrinking market?” This defies belief.

While allowing that mere decriminalization might be “an idea whose time has come,” The Sun, despite the state’s absurd rate of marijuana arrests, passes the buck, and suggests “we” look at Colorado and Washington state—where pot is legal—“and see what happens there before entertaining the idea of legalization of marijuana in Maryland.”

Well, that’s taking a stand! Pardon me for stating the obvious above about the uselessness of editorials in general, and The Sun’s in particular, but from time to time it’s instructive to remind ourselves just how low most daily papers have sunk. There used to be an awful community weekly called The Towson Times in Baltimore County: that’s what The Sun has for a long time resembled.