Our security policy is a reminder that U.S. politicians are all babies. 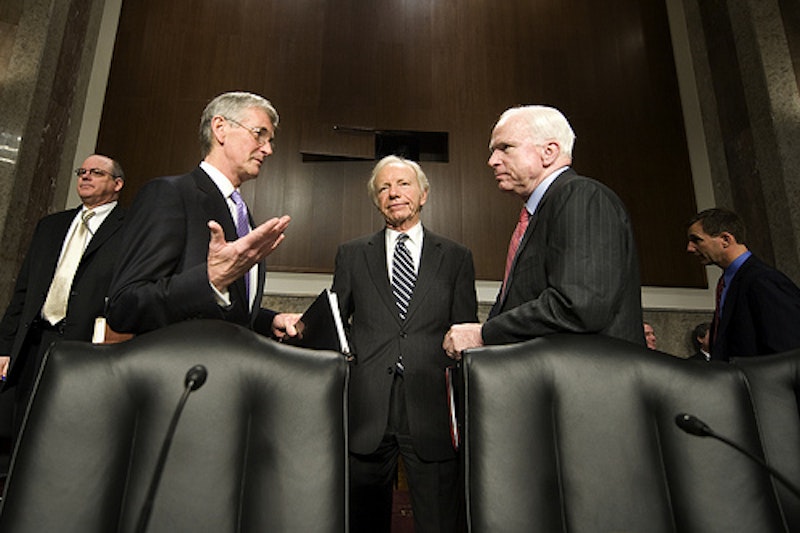 I forgot that Joseph Lieberman wears diapers. In fact, one of the strangest things about spending time in Washington, D.C. recently was seeing all the politicians walking around in their diapers—celebs like Sen. Scott Brown, Chief Justice John Roberts, and President Obama. Sometimes I find it nearly impossible to understand all this. You forget that despite being the most powerful country in the world, the United States is a nation run by little babies in diapers.

I just don’t know how to get through to these people. Our security policy is ridiculous. Reasonable arguments like James Fallows’ aren’t working. So instead, I’m lashing out, John McCain-style and resorting to name-calling, the sort of baby-like tactic might appeal to these diaper-wearers. It was either this or standing outside Congress, holding a sign, and yelling out obscure expletives like “Fuckberry” to catch politicians’ attention.

Let’s start simple: is there anything more stupid than our terror alert system? There are people who are getting paid to scare us with this meaningless metric. Getting rid of it would be a simple but powerful gesture—proof that security policies are not invincible, that we can change policies we realize are useless. Repealing, or even just voting against, security policies is generally bad politics. I understand this. But the terror alert system is one thing no one will miss. You won’t hear a peep from the civil liberties left, the anti-government right or the “Wait this isn’t working and is silly” center. If the diapers in DC are really worried, then just don’t publicize it. It’s not like anyone is following the alerts anyway. There is little more frustrating than something that no one can defend, everyone knows is wrong, and is somehow impervious to the bureaucratic axe.

Last week, the Supreme Court decided that its main entrance ought to be closed to the public. The doors were shut without a single shot fired, closed to the public that the Court is intended to protect. Osama Bin Laden could run naked and blow himself up in the entrance of the Supreme Court, and I would find it less troubling. After a bit of remodeling, the post-attack entrance could be opened anew. Now, it will probably be closed forever by our own hands.

Our continued overreaction to terrorist attacks—both successful and unsuccessful—is starting the scare the living jeepers out of me. In the few days after the failed Times Square bombing, I thought reason might prevail, but it was only a matter of time before Diaperpants McGillicutty and His Tiny-Ass Baby Gang crashed the scene with a bill stripping American citizenship from anyone deemed joining or supporting a terrorist group.

In America, citizenship is your soul. Once you earn it, it is not a merely a set of rights, it is who you are. You can be put to death by the state, but they can’t take away your citizenship. And now we’re talking about doing so for some hunch that someone is “supporting terrorism” (one that need not be proved in the court of law to strip it initially). That’s very 1984, filled with loopholes. Does going to anarchist meetings count? What about giving money to the charity wing of extremist groups? What about someone who gives money to Hamas, labeled a terrorist organization? I despise Hamas, but I don’t think that supporting Hamas, reprehensible as I find their violence against Israelis and Palestinians, is the same as carrying out an attack on U.S. citizens.

But this bill isn’t supposed to be practical. It’s political theater. And it’s killing us. Our politicians are asking us to make the greatest exceptions for terrorism. They have placed terrorism on a pedestal, the biggest threat to our society today, but when it comes to dealing with it, they act like babies about it. They propose irrational, potentially Constitution-violating bills. These aren’t solutions, and they aren’t even trying to be. It’s more irrational bureaucracy, and I agree with Fallows when he says these whack safety rules and regulations are slowly de-legitimizing all the rules and regulations that govern our daily life.

Some jackass unsuccessfully tried to bomb a plane several years ago, and, as Fallows points out, we’re still held captive by our overextended policy reaction. I took a trip to Michigan a couple of weeks ago and couldn’t bring my cologne and toothpaste or bring back a bottle of my favorite hot sauce unless I felt like coughing up a $25 charge and dealing with the inconvenience of checking a bag—all because some asshole failed to blow himself up. Airport security didn’t catch the shoe bomber, the liquid bombers, or the Underpants Man in Detroit; intelligence reports, personal heroism, and luck did.

Let’s play the numbers game. In the nine years since the attempted shoe bombing, terrorists have killed exactly zero U.S. airline passengers. But let’s include 9/11, ignore the decades of incident-free flying before it, add the three failed incidents, ignore the decreased odds of an attack because of passenger vigilance and reinforced cabin doors, and figure out the chances that your flight gets hijacked in the past 10 years. Well, in the U.S. there are roughly 10.2 billion commercial flights per year, which means there were roughly 100 billion flights over the past decade. That means there was a 0.00000000007 chance that your plane would get hijacked in the 2000s.

Think about those hours you’ve spent sitting at the gate. Think about those extra razors and toothpastes you had to buy. Think about those weekend trips you couldn’t take because the last Friday flight was at seven p.m., and there was no way in hell you were making that flight if you left work at five. I don’t know about you, but I would take that 0.00000000004 wager for all those things back. Hell, I’d make that wager just to bring a bottle of Clancy’s Fancy back to Maryland.

And, yet, we’re still scared. I know several people who refuse to fly out due to fear of a terrorist attack (people who did fly pre-9/11). There is still no great outcry at the installation of machines like the one that showed a TSA employee’s coworkers that he had a tiny penis. Of course, that machine, which has yet to have any proven effect at stopping terrorism, actually caused violence when the man beat up one of his colleagues who mocked him for his machine-revealed small cock. Our lives have become worse. We’re spending $7 billion on TSA each year—money that could be spent on schools, infrastructure, or any number of things that could help our long-term economic output, increasing the resources for our intelligence and military services that are doing the real disrupt terrorism.

Diaper-clad Rep. John Boehner recently said, “Luck is not an effective strategy for fighting terrorism.” He was trying to scare you. But he doesn’t get it. Luck wasn’t the strategy, aware and vigilant Americans were the strategy. Active and clever intelligence was the strategy. And luck has nothing to do with how we respond to an attack, and that’s what matters. It’s easy to blame politicians, but we elected them. It’s our reaction as a population that really matters.