Pennsylvania's Hollywood Casino, just off I-83 North, is the unfortunate future for Maryland. 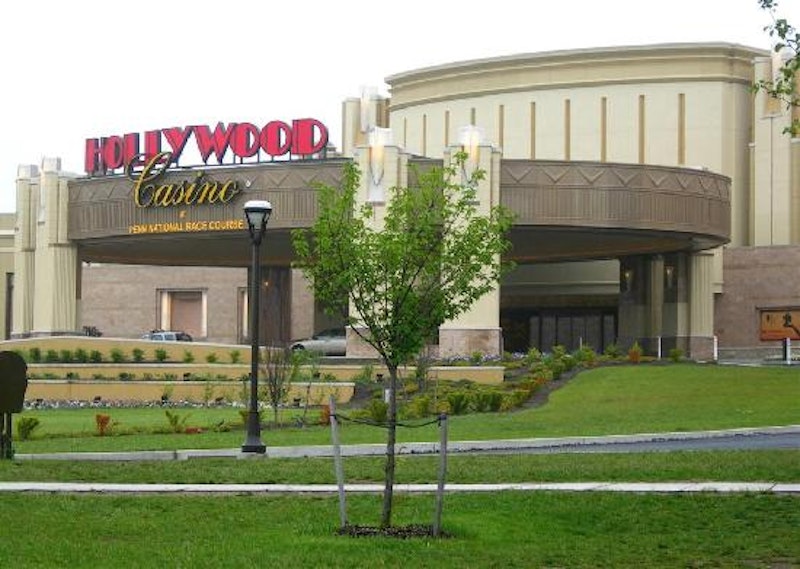 Maryland’s future is in Pennsylvania and it isn’t pretty. In fact, the future is all around us—in Delaware, West Virginia and New Jersey. But take a day-trip to Hollywood Casino, in Grantsville, just off I-83 and a chip shot away from Hershey, and you’ll get a whiff of what’s in store for late-bloomer Maryland.

Hollywood Casino is a splendid architectural eyesore, as most casinos are, plopped down on lush greenswards of farmland in the middle of Pennsylvania Dutch country and attached to Penn National Race Track. The exterior in no way resembles the lavish Steve Wynn wonders of Las Vegas that reach to the sky, such as the Bellagio, and now Wynn Resorts, with a half-billion dollars of artwork adorning the interior walls. There are no Bobby Flay spin-offs and no Emeril Lagasse spice havens. Hollywood Casino was built on the cheap, for the cheap.

The inside tells the whole story. Aside from a curtained central area which is being readied for table games scheduled to begin in June, the acres of Video Display Terminals (slot machines) resemble a thermonuclear light show of bulbs, bells, whistles and other ear-numbing dissonance. To call them slot machines is a throwback. This is up-to-the-second technology and virtual reality. The only skills required are two—insert money and push a button, idle recreation for the motivationally challenged but nonetheless a beginner’s hand-eye coordination test. The machines do the rest as in virtual Blackjack, where at the push of a button a virtual woman deals and dispenses cards. At Hollywood, the machines accept credit cards which the Maryland law prohibits.

Other than the machines’ lights, Hollywood’s a dim little world of permanent twilight as if the shades are always lowered and night is ready to fall. The subdued impression of artificial evening is made worse by a low-hanging nimbus of cigarette smoke, limited to certain areas of play but nonetheless drifting uncontrolled throughout the hall as if defying the surgeon general’s warning. In that instance, Maryland is way ahead of Pennsylvania by prohibiting smoking at such venues.

The population inside Hollywood Casino is dominated by the Social Security crowd in a poignant kind of constituency referred to in the slots industry as adult day care. A good chunk of the folks are in wheel chairs and Medicare-subsidized Scooter chairs. Others have parked their canes and walkers next to their areas of play. (The day-trippers’ buses are stashed out of sight.) By gender, the population appears about evenly divided, but if it tilts one way or the other it’s toward the female side of the gray brigade. And the night-time crowd changes dramatically from the afternoon geezers to a younger, gussied-up crowd freshened after a day’s work. And at Hollywood, there’s not a black person in sight. This is, after all, Pennsylvania Dutch country, in the heart of the state’s Bible belt, and Hershey was once among the most segregated cities in America where, a half century ago, it was restricted to only one black family in the entire town.

The machines themselves accommodate various denominations of currency, anywhere from a penny and beyond. The penny machines are amusingly deceptive. While the enticement might be a penny, playing across multiple lines can increase the bet to $2 to $3 or more for every play. There’s no limit to the ingenious mathematical possibilities among the array of machines at Hollywood Casino or the creativity of those who profit from them.

Soft drinks are available free from dispensers along the walls or are delivered directly to players at the machines by nubile young women in tight red shorts. There is also a buffet/cafeteria area, a fine-dining restaurant with an impressive wall of wines as well as a cocktail lounge for those inclined toward adult beverages.

An escalator ride upstairs leads to the off-track betting area along with a glassed-in clubhouse overlooking the real thing, Penn National Race Track. The rolling green fields of countryside surrounding the oval are more impressive than the track itself. At the off-track betting counter, customers have a choice: A live pari-mutual cashier; or a high-tech automated betting machine that accepts credit cards.

So welcome to Maryland’s future. Penn National has partnered with the Maryland Jockey Club. Read into that what you will: Penn National will join the Jockey Club in the effort to block slots at Arundel Mills and shift them to Laurel Race Course; or, eventually, Penn National will absorb both Pimlico and Laurel. The Arundel Mills location was petitioned to referendum by Anne Arundel County residents, subsidized with $600,000 from the Maryland Jockey Club, and will be on the local ballot in November. The Maryland Jockey Club defaulted on its original application for slots at Laurel by failing to post the requisite $28 million deposit. And now it’s trying to get back in the game after a complicated bankruptcy proceeding that led to its being absorbed by its parent company.

But there are legal pitfalls along the way. Penn National holds the franchise for the 1,500-machine slots emporium in Cecil County—Hollywood Cecil—that will be the first casino to open in Maryland. And Maryland law allows only one slots license to a customer unless it is changed. Nonetheless, Penn National is the third largest gambling operation in the nation, with a total of 17 gambling casinos and six race tracks. It is also the wealthiest. Penn National has $1.5 billion in cash in the bank.

Of the five gambling locations that were available in Maryland, only two, so far, are underway; the Cecil location and Ocean Downs, on the perimeter of Ocean City, which has been delayed by construction problems. Arundel Mills is suspended until the November referendum and who knows how long after that. Rocky Gap, in Cumberland had no bidders. And the Baltimore location, off Russell St., defaulted and will likely be re-bid at some point.

Hollywood Cecil is scheduled to open by October, or sooner. It has already begun taking applications for the 350 new jobs of different levels and descriptions that will accompany its opening. And anyone who’s interested in working or gambling there ought to take the 90-minute drive to Grantsville, PA, to witness what’s in store for Maryland.