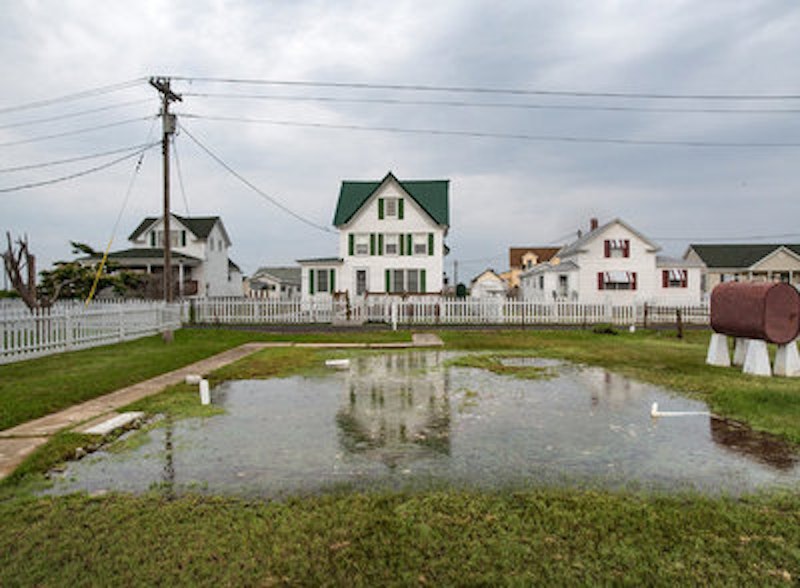 Maryland has always been a dirty state, from its industrial-haze past to its car-strangled present. The state’s manufacturing base rendered toxic byproducts and waste and its smokestack industries made the air we breathe visible with particulate poisons the color of death. America’s the world’s biggest polluter and Maryland has contributed more than its sooty share in one of the nation’s filthiest zones.

So, it is fair to ask if President Trump understood, or even cared, that he is sitting under a parabola of the thickest auto emission pollution in the nation when he yanked America from the Paris Climate Accord. The Oval Office is smack in the middle of the three jurisdictions that live under a permanent cloud of noxious gases. Maryland, Virginia and the District of Columbia together are worse than Los Angeles, New York or Chicago.

There are 6 ½ million registered vehicles in the three jurisdictions, according to the latest figures available—2590 million in Maryland, 3732 million in Virginia and 165 million in the District of Columbia. All three require regular auto emissions testing, though they’ve yet to figure how to check diesel engines. In addition, there are uncounted thousands of power boats licensed to cruise the waters in and around the three-zone cluster, more than 250,000 in Maryland alone. And more than 100,000 cars a day depart from the Baltimore region ferrying people to jobs in the nation’s capital and the areas around it.

The Baltimore-Washington Parkway is the heaviest traveled highway in the nation, and Maryland is considered a pass-through and fill-up state for motorists traveling north and south, adding to the state’s traffic burden as well as its pollution cloud. What’s more, the region’s three major airports—BWI-Marshall, Reagan National and Dulles—accommodate thousands of flights daily.  And let’s not forget Joint Base Andrews, in Prince George’s County, where Trump’s personal fleet of aircraft spends its downtime but when lifting airborne adds to the region’s coverlet of haze.

Maryland regularly tops the list of states with the most cancer deaths. That can be attributed, in part, to Maryland’s three major cancer treatment centers—The Johns Hopkins Hospital, The University Medical Center and the National Institutes of Health—where patients come from around the world and, unfortunately, many die here while receiving end-stage treatment. But that does not excuse an aging resident population that was exposed to chemical plants, shipbuilding and repair and steel and other heavy manufacturing who are statistical casualties. Witness all the law-firm advertising on television seeking out victims. Tuberculosis has always been a close second death-trap.

The first great cleanup of America began when we understood that we could poison ourselves with our needs and wants. It started under President Theodore Roosevelt, driven by a moral imperative and appreciation of the natural beauty all around us. He felt compelled to take vigorous action by a class of writers called “muckrakers,” memorably Upton Sinclair, who turned a clever phrase as well as the stomachs of those who read them, including Roosevelt.

Machinery was simple, then, the reaper and the cotton gin, along with Henry Ford’s Model T and Model A, a few hundred liters short of today’s muscular beasts, and no catalytic converters or federal guidelines to tame them.  And in 1901, Baltimore became the first major American city to dig up its streets and modernize its drainage system.  The city installed separate storm-water and sewerage systems, a first step toward  the cleanup of its waterways. Success was modest, at best. America’s consuming demands and new mobility continued unchecked, and the robber barons of the era prevailed despite Roosevelt’s trustbusting crusade.

The next cleanup, the modern one that we know, got underway in the early 1970s. A little-known scientist, Dr. Barry Commoner, warned of environmental apocalypse unless America cleaned up its act. He was able to marshal the restive leftover agents of change from the failed but righteous presidential campaign of Sen. Eugene McCarthy into a nationwide crusade that embraced the environment as the nation’s only hope for decontaminated survival. Over the decades, the rest of the world joined in, 194 nations—all but two, Nicaragua and Syria—signed on to the Paris agreement to fight climate change.

Planned obsolescence—manufactured goods with the lifespan of a blink—the driver of American consumerism, blotted our roadsides with junked auto hulks, throw-away gadgets and expired must-have appliances, foul-smelling rubber tire pyramids and the ubiquitous stump dumps that smoldered for weeks, even months, with acrid fumes enveloping entire neighborhoods. And the symbols of an expiring planet were Lake Erie, the Delaware Estuary and Raritan Bay—all dead, dying and diseased. But the Chesapeake Bay still had hope as what H.L. Mencken called “the world’s greatest protein factory.

Commoner, as a fiery evangelist, set America on a course to greenhood. And Maryland was among the first to grasp the opportunity. The state passed laws requiring smokestack industries to install “scrubbers” to reduce air pollution; it outlawed strip mining; it sealed mines to prevent the leeching of acid into waterways; it banned open burning dumps; it built sewage treatment plants and water filtration systems; it formed compacts with surrounding states to protect the Bay; it adopted soil and shore erosion programs; it enacted wetlands protection programs; it funded open spaces programs; it placed strict limits on the sulphur content of all oils; and bounties were paid for junk cars that were turned over to scrap processers. Over the years, Maryland has continued apace with the fight to protect the state’s quality of life, and just recently has totally banned fracking and has increased its air quality standards. And Maryland’s moving at a swift clip to replace conventional sources of energy with renewable wind and solar power.

A slew of lawsuits have been filed by states to block Trump from rolling back laws, regulations and the climate change legacy of President Barack Obama. Most recently, Maryland joined 10 other states seeking to prevent the Trump Administration from dumping energy efficient regulations on a number of consumer products. And again, Trump’s Environmental Protection Agency has delayed for two years rules that would have limited the release of smog-forming methane from oil and gas wells. Maryland’s Republican Gov. Larry Hogan has pleaded with Congress to reject Trump’s plans to cut funding for the Chesapeake Bay cleanup, though he has refused to take a position on Trump’s bailing out of the Paris climate agreement despite Democrats’ blandishments. Maryland’s Democratic General Assembly, over Hogan’s objections, recently gave the state’s attorney general the authority to sue Trump without first getting the governor’s approval. Brian Frosh, the state’s AG, is active in at least a half dozen lawsuits against Trump.

Today’s threat to the Maryland region is largely from outside its borders. A huge chunk of the Arctic shelf hangs by a threatened sliver. Maryland, and all coastal states, are losing irreplaceable acreage as tides rise and wash away land and even houses. Just recently, it was reported that Trump phoned the mayor of Tangier, VA—about 10 miles south of Smith Island, MD—which is losing about 15 feet of land a year as the water rises around the island. Mayor James “Ooker” Eskridge reported that Trump “said not to worry about sea-level rise. Your island has been there for hundreds of years, and I believe it will be there for hundreds more.”

Thus, we have a level of boorish ignorance that denies scientific evidence that the eye can actually see—the land beneath the feet visibly washing away. The residents of Tangier, and there are fewer than 500, have been lobbying for years for construction of a sea wall to prevent further erosion. And as the temperature keeps rising and the island eventually disappears into the Bay, Trump can tell the survivors he pulled America out of the nonbinding Paris climate change agreement in search of a better deal.