Ann Coulter Is the Johnny Rotten of the Right

Milo is the Sid Vicious. 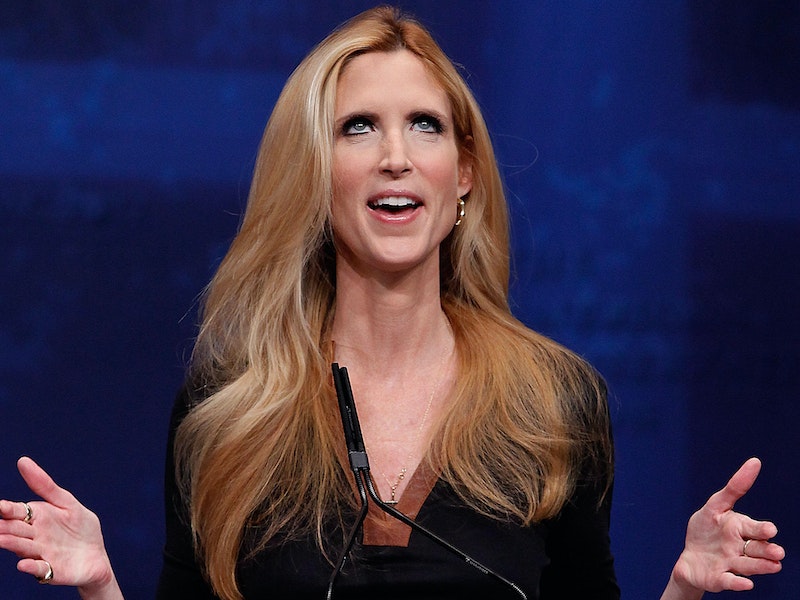 Milo Yiannopoulos is planning a comeback. The 32-year-old conservative firebrand is threatening to return to the University of California at Berkeley, where rioting leftists disrupted his attempted speech in February. Soon after his career imploded when tapes emerged of him on a podcast promoting pederasty.

In the meantime, fellow conservative Ann Coulter is speaking at Berkeley on Thursday. Coulter’s talk is the vortex of potential riots by the same mom’s basement anarchist who torched the campus when Yiannopoulos was there. Of course, both Coulter and Yiannopoulos should be allowed to speak. But while Coulter is actually a highly intelligent writer and investigative journalist, Yiannopoulos is simply a prankster and narcissist.

Several people have argued that the new young conservatives are like the punk rockers of the 1970s. The new right, they say, boldly calls out truths that society is too frightened or pampered to want to hear. They’re like the Sex Pistols. Yet the Pistols, the band that featured Johnny Rotten and Sid Vicious, was a dynamic and seminal band that was not just loud but had something important and creative to say. Rotten was—is—a literate misanthrope who later formed the hugely influential Public Image Limited. Vicious was rude, self-destructive, attention-seeking, and ultimately toxic for the movement he claimed to represent—just like Yiannopoulos.

When he was seven, Rotten, born John Lydon, was sidelined with meningitis, an illness that left him unable to recognize his parents or recall his own name. This left him with an obsession with telling the truth, something that served him well in rock ‘n’ roll. For her part, Coulter has become rich by torching through leftist dogma by relying on research and facts. For the screaming liberals out there, please provide a list of inaccuracies in any of her books.

Vicious, whose real name was John Ritchie, was a replacement for Pistols bassist Glen Matlock, who had written some of the best songs on the band’s first album, Never Mind the Bollocks. Unlike Vicious, Matlock could play his instrument. “Glen Matlock was the most musical of the Pistols, the hub of the band,” punk historian Ian Macleay once said. “After he left, the Pistols only wrote four more songs—none of them of any merit.” Unfortunately, the Pistols cared more about image than competence. It probably costs them a future of great music.

As David French has persuasively argued, in recent years conservatives have been dazzled by ideological rock stars like Yiannopoulos at the expenses of cultivating a deep bench of real talent. Like Vicious, his performance is less about creating a lasting work of intellectual or artistic importance, and more about the spectacle of tweaking the easily offended. In the case of the Pistols it was the tight-asses and rednecks in England and America. For Yiannopoulos it’s the fragile snowflakes on college campuses. It was, for a spell, great fun watching brainwashed student audiences lose their minds as Yiannopoulos argued for controlled immigration or against feminism. But it’s grown stale. Yes, students have been indoctrinated by crazy lefty professors. Feminists are angry. We get it.

Yiannopoulos recently added this post to his Facebook page: “In light of recent controversies, I am planning a huge multi-day event called MILO'S FREE SPEECH WEEK in Berkeley later this year. We will hold talks and rallies and throw massive parties, all in the name of free expression and the First Amendment. All will be welcome, regardless of political affiliation.”

It’s easy to support his case for free speech, which is suppressed on too many college campuses. Yet it’s also possible to lament that Yiannopoulos, like the young right-wing star Tomi Lahren who recently flamed out, hasn’t done much to earn his fame. He hasn’t written works of intellectual importance. He hasn’t directed great films, like the troubled but talented Mel Gibson. He doesn’t give lectures loaded with well-researched erudition, like Princeton’s Robert George. This is to say nothing of the learned people who shaped modern conservatism: Irving Kristol, Norman Podhoretz, or Jeane Kirkpatrick. These people were scholars, but also activists of tremendous spirit and humor. They could disarm with facts and social science, as well of wit.

Johnny Rotten’s legacy is not only the Pistols, but the books he has written and Public Image Limited. It’s easy to imagine Sid Vicious alive today, an aging rocker who’s out of ideas but still misses the excitement of the crowd. He wants to get the band back together, but without a body of work to back him up, some genuine expression of scholarship or creativity, it just becomes a lot of noise.