U.K. Politician Tim Farron Is in the Hot Seat

Gay rights activists are asking too much from a conservative Christian. 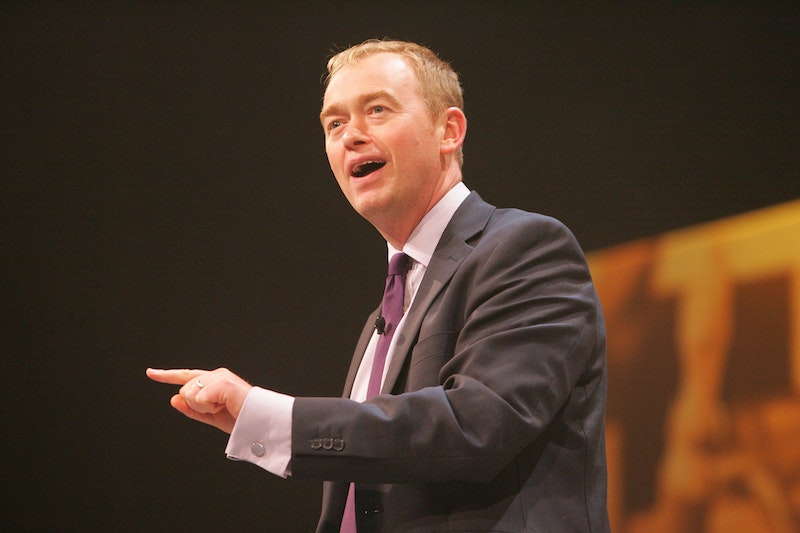 Tim Farron is a Christian and a leader of the U.K. Liberal Democrat party. He supports LGBT rights, but suddenly some people need to know if he thinks gay sex is a sin. LBC reporter Vincent McAviney asked him the question 11 times. He wanted to know if the politician followed Leviticus 20:13: “If a man lies with a male as with a woman, both of them have committed an abomination.”

Responding to McAviney, Farron said that being gay is not a sin, that he believes individuals have a right to choose their sexual partners, and that he and his party vigorously support LGBT rights. The reporter wasn't impressed. “In acts of love,” he asked, “do you approve of gay people having sex?” A man in the crowd at one of his rallies held up a sign reading, “Tim Farron hates gays?”

The Christian concept of sin does not entail hatred towards sinners. Farron’s never said an anti-gay word as far as anyone knows, but in the age of call-out culture, that's not enough. His problems started when he abstained in a gay marriage vote during the last parliament. He's since expressed regret for that, stating that he supports gay marriage. Channel Four News recently quizzed him on the topic in a television interview. The show's host asked if he, as a Christian, thinks gay sex is a sin. The frontrunner in the race to succeed Nick Clegg as leader of the Liberal Democrats replied, “We’re all sinners.”

It's obvious that Farron has some religious problems with gay sex, or he'd have put the issue to rest and saved himself a lot of headaches. Guardian columnist Owen Jones tweeted: “Tim Farron refusing to say whether gay sex is a sin is horribly damaging to young LGBT people struggling with their sexuality.” Horribly damaging that someone in a conservative religion wouldn't state that it wasn't a sin? Jones must believe that many young people rely on churches to validate their sexual practices and are just crushed when they don't.

Owen Jones doesn't live in the real world. He lives in an activist’s world, where overstatement is the norm. He doesn't understand that there's no logic to religion or that it doesn't keep up with the pace of social change. If Farron’s pastor is telling him that having gay sex is a sin, then that's what he's going to believe. It's the same with the average Muslim, who believes what their imam tells them, no matter how far it deviates from current concepts of social justice. The indoctrination begins soon after birth, in religions, so it sticks.

This matter exposes the hypocrisy and double standards of the left on the topic of religion. It's impossible to imagine the media jumping all over a Muslim politician with a generally positive voting record on gay rights because they refused to say gay sex was approved of in their religion. There are 10 Muslim countries where you can be executed for being gay.

When Sadiq Khan was elected mayor of London, he wasn't given any religious litmus tests, and he's now judged on his performance, not his personal religious beliefs. Journalists asking “gotcha” questions to Muslims (e.g. “Do you believe in sharia law?”) would be shouted down with cries of Islamophobia.

Liberalism is supposed to mean people are entitled to their own opinions as long as they don't force them on others, but regressive leftism has created new standards. Anyone who’s gay and needs to hear Tim Farron say that he doesn't think gay sex is a sin is confused about the nature of religion. Religions and the religious don't care about making you feel better about your private practices. Their beliefs were forged centuries ago, long before gay marriage could be mentioned. Farron is keeping his private beliefs to himself. When religious politicians drag their personal beliefs into the public arena, that's when they should be called out.

Farron's finally caved after a lot of pressure and said he doesn't think gay sex is a sin. Who knows what he really thinks though—he wants to get elected. Quite possibly, he thinks all kinds of things are sins, including greed, adultery, sloth, lust, envy, and pride. But he's not looking to deprive wife swappers, couch potatoes, and horny people of any rights. He’s a follower of Christianity, not a leader who decides what the sins are. Religions aren't democratic institutions where all sorts of opinions are tolerated. Attacking him in this way means that the same can be done to Muslims, which is exactly what the left abhors. Also, anyone who worries about the super-religious considering their actions sinful is a complete fool.