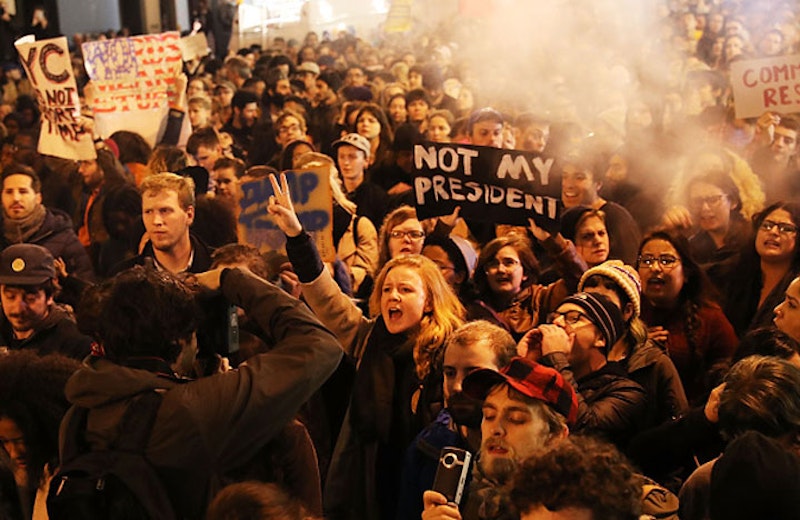 A couple of weeks ago I went to the 76th annual American Humanist Association conference to give a talk called “WTF is Genderqueer?” They loved it! I lost track of how many people came up afterwards and thanked me for explaining it in a way they could understand. The conference also gave me the chance to catch up with old friends Sincere Kirabo, Matthew Facciani, and Diane Burkholder; meet online friends for the first time like Ashton P. Woods, Conor Robinson, and Desiree Kane; and make new friends like Rajani Gudlavalleti and Greta Christina. It was a great weekend that recharged my activist batteries, and made me feel accepted in the broader secular humanist movement.

Unfortunately, not everyone there received the same amount of love.

Several talks and presentations focused on racial justice, and while I thought they were all terrific, not everyone agreed. Not only were there white tears during Q&A sessions (which are always expected), but apparently someone on the AHA board walked out of Woods' talk because they “didn't want to hear another angry black man.” Allegedly this same individual gave Gudlavalleti a lot of shit about her presentation on racial justice with Robinson (who didn't receive any push back even though he said the same thing Gudlavalleti did). Also, Kane (who spent seven months at Standing Rock) told me someone said to her, “If you all at Standing Rock didn't burn stuff and leave so much garbage behind, maybe the cops wouldn't have shot rubber bullets at you.”

If you spend enough time on YouTube, you’d be convinced “identity politics” are ruining secular activism. I disagree: respectability politics are the real culprit.

The terms “identity politics” and “respectability politics” get tossed around online a lot, so first I want to define what exactly I’m talking about. Wikipedia defines identity politics as “political positions based on the interests and perspectives of social groups with which people identify.” This includes black liberation, women’s liberation, and LGBTQ liberation movements throughout past decades. And with most political theories, it has its pros and cons. On the plus side, as Ijeoma Oluo of The Establishment wrote back in January, without identity politics straight white cis men would continue to dominate everything. On the other hand, as Iranian atheist activist Maryam Namazi told me during last year’s Women in Secularism conference, identity politics can homogenize entire groups of people to the point where anyone who doesn’t conform to that homogenized group’s ideals are Uncle Toms. I saw a lot of this within the LGBTQ community during the fight for marriage equality; while the mainstream LGBTQ movement pushed for marriage equality, some more radical activists claimed marriage is a tool of the patriarchy and, therefore, something to fight against. In the end, identity politics are way too complex to be summed up in a tweet.

Respectability politics “refers to attempts by marginalized groups to police their own members and show their social values as being continuous, and compatible, with mainstream values rather than challenging the mainstream for what they see as its failure to accept difference.” For example, in the LGBTQ movement, there’s the “We’re just like you narrative” to show straight cis people that we are, in fact, regular people who laugh, cry, and want to be loved just like everyone else. Pushing this narrative, however, often throws bisexuals, transgender people, polyamorous people, and LGBTQ people in the kink scene under the proverbial bus. You have to be the “right kind of queer” to be taken seriously.

This was the case during the conference. I sat in the front row for the racial justice presentations, and didn’t feel personally attacked at all. The talks made me think about ways I might’ve inadvertently been complacent with racism, of course, but didn’t feel the speakers were “angry,” mean, or hurtful. They were angry about racism, yes, but even Woods said during his talk, “I don’t hate you. I’m trying to have a conversation with you.” But apparently even a serious conversation about racism wasn’t “respectable” enough for some of the audience. They wanted to hear nice little #AllLivesMatter pep talks, not serious discussions about being complacent with the system.

Despite the fact secular humanism goes hand-in-hand with racial justice, the mainstream secular humanist movement still has a long way to go. I talked to the Executive Director of the AHA, and he assured me that they’ll continue to push for racial justice, feminism, and LGBTQ rights despite what critics say. These conversations are uncomfortable, but that’s the point; as humanists, we should be uncomfortable with the fact that we’ve all been inadvertently complacent with systems of oppression. First we need to leave respectability politics at the door.