PBS & NBC documentary The Mueller Report is the ur-text of media hagiography of Robert Mueller as a superhero. 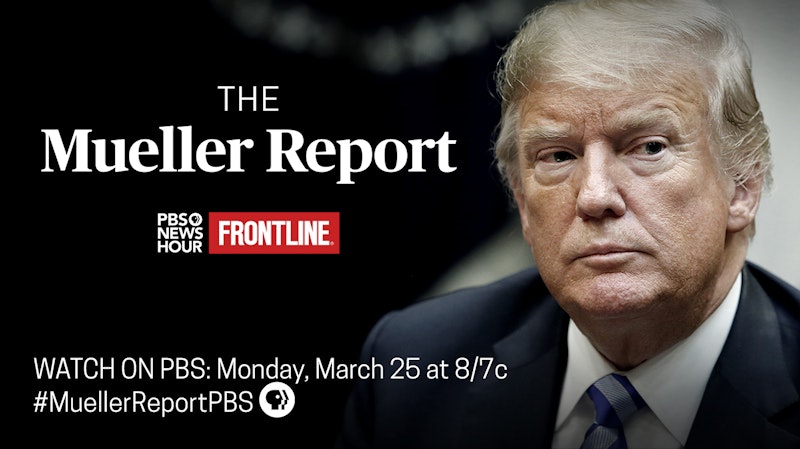 On Monday, “a groundbreaking collaboration between PBS NewsHour and Frontline: The Mueller Report” premiered. Cue the true crime music bed, grimy black and white, excruciatingly slow digital zooms on interview subjects, and the most unflattering pictures of Trump they could find. Couldn’t have taken long, but I think it’s hilarious that he looks like a bloated toad in all of Frontline’s stills.

The voice actor is instantly recognizable, straight out of a Lifetime special on a kidnapped baby or murdered spouse. The interviewees, all Washington Post and New York Times reporters, and supporting players in the Trump saga like Andrew McCabe and Steve Bannon. I miss Bannon. At least he was somewhat articulate and idiosyncratic—his landfill physique, briny skin, and burlap wardrobe—but of course he wound up as much of a media whore as the rest of them. Matt Apuzzo of the Times on Comey’s testimony: “And kind of all heads turned to the television in every newsroom in America and we’re saying, ‘Is Comey going to confirm on the record that they’re investigating the Trump campaign?’” Carol Leonnig of the Post on Trump’s Oval Office meeting with Kislyak: “Oy… that meeting.” They speak with glee about “palace intrigue” as if present tense politics are as frivolous as football. They prove Trump’s point, that his presidency his just another season of The Apprentice.

Who was this documentary made for? Middle-school students? Dementia-addled Boomers? They discuss and dissect the events of the last two years as if they were part of a forgotten, distant past. Sarah Ellison of the Post workshops a novel out loud: “It’s a sort of rainy weekend in Bedminster, so Donald Trump is supposed to be out golfing, stuck inside. He’s in sort of a foul mood in the morning.”

The tone of the piece is inappropriate and completely transparent, a bunch of journalists and former bureaucrats turned talking heads rolling around like pigs in shit knowing they’re part of the greatest entertainment of our lifetime. For the journalists at least, this is all a comic book, with heroes and villains and repetitions of that tired cliché, “in a way it’s like a play, you can’t believe it really happened.” Oh, please! Apuzzo even shows his hand (and head) at one point: “Terrible optics, terrible optics… you couldn’t have scripted it worse.”

Even worse: “This is like those moments at the beginning of the Avengers movies where all the superheroes are sort of spread across the globe, and Bob Mueller calls them all, and they all reassemble in Washington together to take on this mission.” Permanent government breeds brain rot. “Drain the swamp,” a late addition to the Trump campaign’s sloganeering, has been proven righteously correct: these people prop up and offer themselves to oligarchy and beg for more of their regularly scheduled programming. They don’t want anything to change. They’d rather have another Trump term than give Bernie Sanders a shot.

Frontline’s documentary is a languorous blowjob on Robert Mueller, a man who “hated” making 400K in the private sector, and needed to go into law to do “the lord’s work” doing the only thing he cares about: “putting bad guys behind bars.” Never mind that this man was the head of the FBI, bastion of liberal values and causes. Marc Fisher of the Post recites with glee Mueller’s embarrassing habit of picking up the phone at the DOJ, “Mueller, Homicide!” He’s not Batman, but everyone wants him to be, because they can’t understand or be bothered to engage in a world of politics that exist outside of a comic book expanded universe. These people make me sick, so shallow and superficial in their disdain for Trump, a purely aesthetic disgust thrown into sharp relief when one of “the good Republicans”—which I assume now includes George W. Bush, a far worse president than Trump—and attention whores like John McCain and his brain-dead daughter.

What we see in the Trump era is the total, final collapsing of politics into entertainment, another spectator sport drawing higher ratings and less shame than combat football. Every journalist interviewed by Frontline speaks with glee about “palace intrigue” as if this were all just another prestige television show, one with no season breaks that will run continuously until January 20, 2025 (prepare yourselves). It’s a fantasy, and when they cry crocodile tears for kids in cages, they’re thinking about optics just as much as Trump doesn’t. For bipartisan institutional hagiography, look no further than Frontline: The Mueller Report. You don’t have to read Comey’s book, or Sean Spicer’s, or any of these hacks. Just check out and prepare for the DNC to fuck up again next year. Isn’t America already great?