Except for Mayor Pete, a downcast nation. 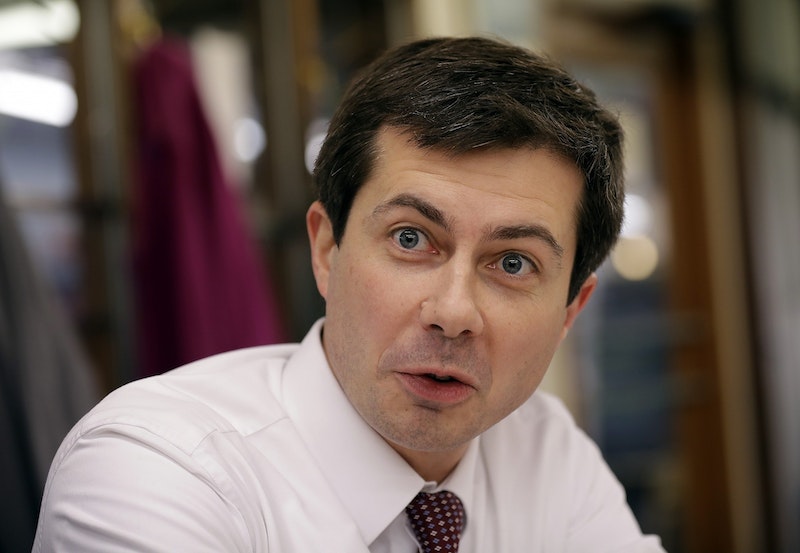 I’ve always liked the We Five.

Let’s start with Mr. Peele, the two-time film director who’s catapulted to head of the class with Get Out and now Us. I was so-so on the former, missed the genius, but Us was a snoozy, sort-of horror film with scattered current anti-Trump political references that didn’t add up to much. I did like the winning performances from Winston Duke, and Shahadi Wright Joseph, who snapped her fingers so mesmerizingly I’d have sworn she was about to break into a 2019 version of Stevie Wonder’s “Uptight.” Lots of talk about the “twist” ending—which you could foretell about 10 minutes in—and the night fright scenes, which for me, no fan of horror movies, weren’t as scary as a Goosebumps video.

Peele’s not overt enough in his political theme of two Americas: that’s somewhat understandable, since he probably wants no part of Michael Moore’s patch of millionaire #Resistance acres (by the way, I wish someone would claim the title of Top #Resistance Leader), but he doesn’t flesh out the idea, currently in vogue, of a second Civil War beckoning in the Lower 48. It takes five seconds to warn about 1860s-redux on social media, but as I’ve written previously, as have other late-innings writers, if it didn’t happen in 1968, chances are slim at this juncture for open warfare. (Democratic presidential candidate Tulsi Gabbard, running from the pack, said post-Mueller it was time “to move on,” relieved that the second Civil War was averted since Trump wasn’t indicted.)

Another oddity that few of the War scenario experts explain: who the fuck will be on the front lines, with guns and dirty bombs and, but of course, Molotov cocktails? It takes two sides for a war, and while I suppose it’s conceivable, barely, that the MAGA contingent might want to kick some socialist ass, are “progressives” also going to take up arms? Is David Hogg on board with that? (A very, very important question for the future Congressman). Isn’t that faction of the country anti-gun, as well as some who are pacifists (maybe in name only) and too self-involved to march en masse—led by AOC, in the fever dreams—to Tennessee, Ohio and the “bad” parts of Florida to mow down their opponents? Maybe my imagination’s on the fritz, but I can’t even envision a near-future where the KC approaches the 620,000 from the first Civil War.

But I could be missing the point: maybe it’s a “theoretical” second War Between the States, which doesn’t really count, despite the 1,000 or so generals and buck privates who patrol social media.

And, dare switch over to coverage of MLB’s Opening Day (and the useless predictions from sportswriters who’ve exhausted their collusion theories now that the money spigot is flowing again; I mean senior citizen Justin Verlander getting a extension from the Astros for $66 million?) and you’ll miss the latest discussion of reparations for African-Americans.

The New York Times’ David Brooks painfully (for readers) wrote about that on March 7, invoking Lincoln, one anecdote from an angry black woman in South Carolina, the pity that Americans don’t talk about sin “in the public square any more” (the “public square”? Is Brooks time-traveling?) and concluding we’re a nation “coming apart at the seams.”

Several Democratic presidential candidates are throwing out the reparations bait to rapt audiences—Elizabeth Warren, Julian Castro, Cory Booker and Kamala Harris, so far. I’m not in favor of this economy-busting idea, at least reflexively, but as always, it’s a fascinating and bold policy proposal and I’d like to learn more.

Trouble is, I haven’t seen one warrior spell out the details: who qualifies for the cash payment? How much, $200 per or $10,000? How will the government pay for it—aside from eating the rich, which won’t produce a fraction of the necessary funds—and what timetable are we talking? These are not trivial questions: there’s a case to be made, whether I agree or not, but all the proponents are saying—and the same goes for the laborious task of abolishing the Electoral College—is that we need to “study” the issue of reparations.

And most citizens know that “study” is a euphemism for doing nothing; it sounds good on the stump, and that’s about it. I think it’d be daring, and perhaps politically smart, for Harris, Warren or Booker to declare definitively, like JFK and shooting for the moon, that this is how it’ll work, these are the exact monetary details and if the country’s at least temporarily put out to pasture economically, well, it’s past time to address the blight of American slavery. Won’t happen since it’s political suicide.

Mayor Pete, the current darling of “elite salons” and good, old ordinary Midwesterners with a lick of common sense, isn’t making any noise on the subject. Even though he went to Harvard and can read Paradise Lost in 17 languages. He talks about climate change, single-payer health insurance and the necessity of labor’s strength. Boilerplate: maybe that’s the way to go.

Bernie Sanders, who’s trashed daily by the media, was far more circumspect about reparations at CNN Town Hall, saying, “What does that mean? What do they mean? I’m not sure that anyone’s very clear.” It’s hard to fathom the antipathy for Sanders, but I guess he’s learning that honesty doesn’t pay off.