Trump Forgets Nothing Because He’s Learned Nothing

The President should play himself in the inevitable upcoming movie. 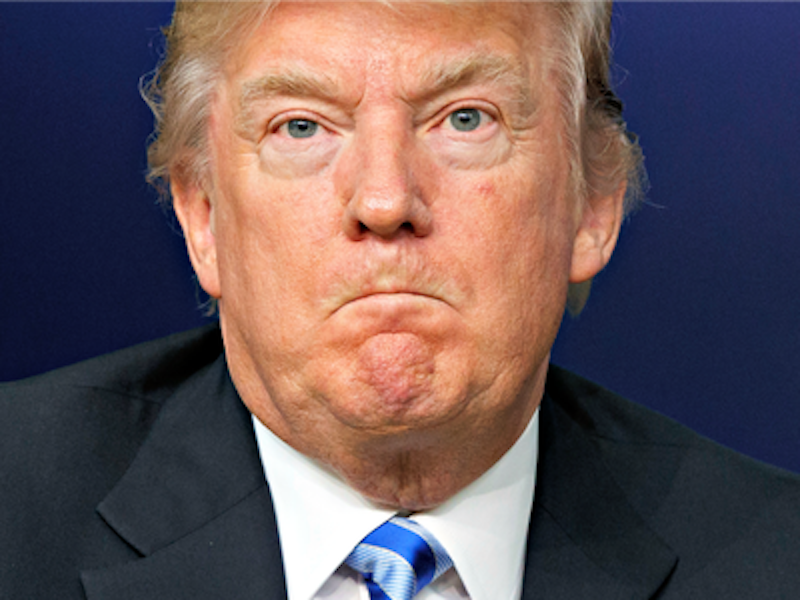 Newspapers and reporters, in war, peace and politics, have always been romanticized on film and in books, if not for their truth-telling then for their reckless adventures and single-minded derring-do. In the past half century, four presidents—Lyndon Johnson, Richard Nixon, Bill Clinton and now Donald Trump—have felt the smite of the presses and the whiplash of their own peccadilloes and falsities through dogged pursuit and a mighty assist from more leaks than a breached Dutch dike.

When the movie is made, no doubt from a book by one or more of the reporters birddogging Trump, it will follow in the tradition of the trench-coated Foreign Correspondent, Deadline U.S.A. and the journalism school enrollment booster, All the President’s Men—all of which added to the mythic lore of the reporter as soothsayer.

(My modest involvement in the making of All the President’s Men was accidental: I was press secretary to Maryland Gov. Marvin Mandel (D) at the time, and a Washington Post State House reporter made a routine news-check call. He asked if Dustin Hoffman could listen as part of his prep work for his role as Watergate co-reporter Carl Bernstein in the film. When the uneventful chat was over, the reporter called back and asked if I’d like to hear Hoffman’s reaction to the conversation: “He says you’re all a pack of f-----g liars.”)

Since those benighted days, the news business has expanded its tools way beyond rotary dial phones and manual typewriters to cell phones, the Internet and all of its applications, notably Twitter, the instrument Trump uses to emote after being agitated by a random cable news tidbit, or to conduct risky diplomacy with his two million curious subscribers instead of through formal channels. But Twitter works both ways and often backfires to bite Trump.

In a time when the news industry is under economic and political siege, it’s exhilarating to witness America’s two finest newspapers, The New York Times and The Washington Post, duel it out in a spectacular scoop-by-scoop display of enterprise and ingenuity, aided by a heavy dose of stupidity and backbiting from within the Trump Administration as well as the Twitter-y president himself. The amazing accumulation of authenticated and sourced news over the unprecedented short span of four months leads to a singular conclusion: Trump is either delusional or a liar—or both.

The Washington Post has already racked up a Pulitzer Prize for David Farenthold’s “nose-down, ass-up” reporting (in the Post’s late Executive Editor Ben Bradlee’s colorful bloodhound characterization) on Trump’s elaborate fibs about his charitable giving. And the Times has seen its online subscriptions soar because of its reporting on Trump after experiencing, like most publications, a steady decline in its print circulation. The two papers share not only professional dedication to the pursuit of news but also the most expansive and expensive coverage of the nation’s capital (and wherever news events lead them.)

Say or think what you will about Amazon owner Jeff Bezos, who also owns and bankrolls The Washington Post, but he’s given the paper’s editors a free hand and a budget to hire reporters and expand coverage. That they have done, with fresh bylines appearing almost daily from around the globe. And a series of cutbacks has not affected The Times’ coverage of events, domestic and foreign, wherever they occur. They are on Trump like Krazy Glue.

Watergate—the demarcation line when journalism’s rules of engagement with public officials were altered forever—and, more specifically, the movie All the President’s Men, gave the business of ferreting out public corruption new cachet and a swelling of reportorial ranks. It became fashionable to join the news business, although the graduate schools were turning reporters out in Brooks Brothers suits and Burberry trench coats and not slept-on-a-park-bench apparel.

A graduate degree from the Columbia School of Journalism became a networking tool as well as a passport to the nation’s elite newsrooms. The immediate risk among the new batch of reporters was that journalism might become a cause or a crusade and not a job. That, mercifully, was left later for the electronic age and the likes of Fox News and The Drudge Report. But the Fox News colossus, and not Trump’s fabricated “failing” New York Times, is collapsing and losing advertising dollars in the billions. And the liberal MSNBC has overtaken Fox, at least temporarily, to become America’s number-one rated cable channel. Attribute this to Fox’s internal troubles and MSNBC’s ankle-biting coverage of Trump.

A brief refresher: The jig was up for Johnson when the press, notably Walter Cronkite, turned against the war in Vietnam. The reporting on the ground contradicted what the generals were telling Johnson and what the Pentagon was feeding the public. Nixon was a double-dipper of sorts. He’s remembered mainly for Watergate and the impeachment proceedings that led to his resignation. But his administration also tried to block publication of the Pentagon Papers and lied to cover up the Cambodia bombing and the expansion of the Vietnam War. Clinton, to keep it clean, had a seven-year itch that he couldn’t control, which led to charges of perjury and impeachment. Clinton was one of two presidents ever to be impeached. The other was Andrew Johnson. Both beat the rap.

As for Trump, he’s a work in progress who has the good fortune of a slight majority of votes in the Senate where impeachment, and removal from office, is ultimately decided by a two-thirds vote. (But there are others ways for removal, such as the 25th Amendment.) To say he is inept and unfit for the office of president is underestimating his destructive force. Trump need look no further than his own West Wing to unearth those who are undercutting him while they burnish their resumes, which illustrates both his lack of judgment and understanding of human motivation. Trump will forget nothing because he has learned nothing.

Trump’s campaign pledges are in shreds, if he remembers them at all. It’s a sure bet with long odds that Trump knows little or nothing about the contents of his $4.094 trillion slash-and-run budget that punishes kids, the poor and the disabled, or his health plan in which the sick and the elderly subsidize the healthy and the young. Trump was conveniently traveling abroad when the budget was dumped on Congress by his one-man wrecking crew, Budget Director Mick Mulvaney, who is Trump’s point man on shrinking government no matter who gets hurt. But the Russia story still dominated the headlines both in The Post and The Times while Trump was overseas, causing further concern among European allies who do not share the president’s sensibilities about a nation they view as a constant threat.

So, when the Trump movie is made, as it no doubt will be, and the press will play a major role, as it should, the question will arise about who should be cast in the role of the president. No, it shouldn’t be Alec Baldwin, who parodied the president to Saturday Night Live wet-your-pants laughter. Trump should play himself. What could be more authentic than a mountebank playing himself pretending to be president?