Colbert, Trump and the Unanswered Meatball

Two different kinds of brilliance, plus an invisible foodstuff. 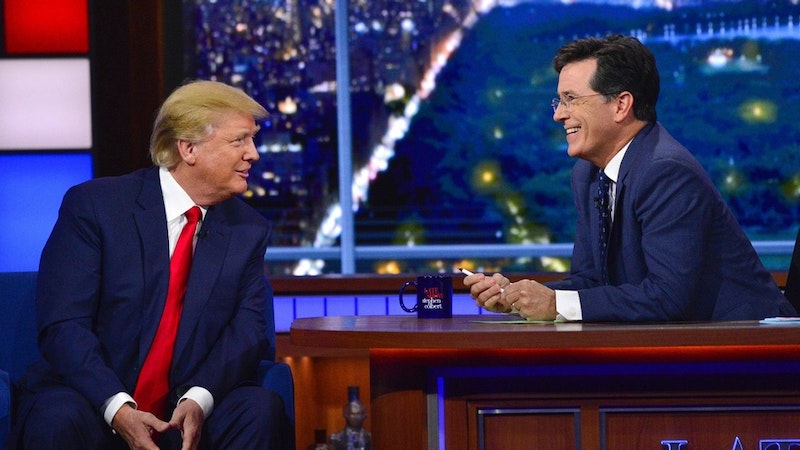 At one point during his sit-down with Donald Trump, Stephen Colbert just couldn't hold it together. Colbert's forehead dropped to his knuckled hand and he laughed in the direction of his desk. Trump had just said that his Mexican wall would have “a big fat door,” and that did it—the fat door. Understandably so. With all the fuss that Trump kicks up, sometimes you have to take a moment and appreciate the small things, such as his way with language. I'll make an uncheckable claim: until Trump wanted to explain his immigration policy on The Late Show, no presidential candidate had ever used the “big fat” construction (as in “That guy's a big fat zero,” etc.) while laying out his grand vision for the country. But this is the Trump era and the old rules crumble.

The Trump on view with Colbert was surprisingly respectful and subdued. Colbert was loud, to the point of seeming over-miked, and he was aggressive about space. The smaller man knows how to dominate when the camera is on. He talks high and fast while keeping his voice bright, with the brightness making him sound like chipper good company even though he's keeping the other fellow penned up. Colbert also moves more than the other guy, drawing on the skills he built during his improv days. His approach was on view when he faced off against Bill O'Reilly many years ago. He was at it again with Trump, and perhaps even more so. If Trump is the first candidate to talk about his big fat policy idea, Colbert is the first interviewer to mime holding a meatball while talking with a presidential candidate.

The meatball was the allegedly easy pitch Colbert was about to offer Trump in the form of an interview topic. The splayed fingers of Colbert's hand traveled above and below the palm of the other as he mimed his creation. “There's, like, sauce all over my hand,” Colbert said. “This meatball is so big.” The corners of his mouth folded down from the effort of holding it. Then he lofted the meatball and followed it with his gaze. “Barack Obama,” Colbert announced. “Born in the United States. Go.”

As so often, Colbert had been cunning in his choices. Was the President born here? Easy to answer for most people, but not for Trump. He spent years thumping the Birther drum, but now he wants attention to go elsewhere, to his plans (well, more like his vague but vivid aspirations) for the United States. Press attention recently threatened to veer back to Birtherism when a questioner at a Trump town hall meeting uncorked on the Muslims and said Obama was born abroad. Trump then canceled an appearance at a candidate forum, reportedly because he wanted to wait out the fuss before showing himself in public.

With Colbert's meatball before him, Trump could say, yes, the President was born here. This would convince his nativist fans that he was a sellout and convince everybody else that the flak over the town hall incident had thrown a scare in him. Or he could say no—or maybe, or it's a mystery—and spend many news cycles as the Birther candidate and nothing else. The brilliant Colbert had boxed him in, after first distracting him with the elaborate production of the invisible meatball. The host had deployed his battery of skills to put Trump in a hell of a spot.

Trump's answer, like the man, was brilliant in its own way, a way that to the naked eye involves no cleverness at all. “I don't talk about it anymore,” he said, and that closed the matter. Simple. He then began talking about the veterans and how we should do more for them. Nobody interrupts you when you're talking about the veterans. Trump had never even glanced in the direction of Colbert's invisible meatball as it rose in the air. The guy may have hit some bumps, but he's still a big fat contender.