Obama and the Othello Trap

The President is not "easily jealous" or "perplex'd in the extreme." 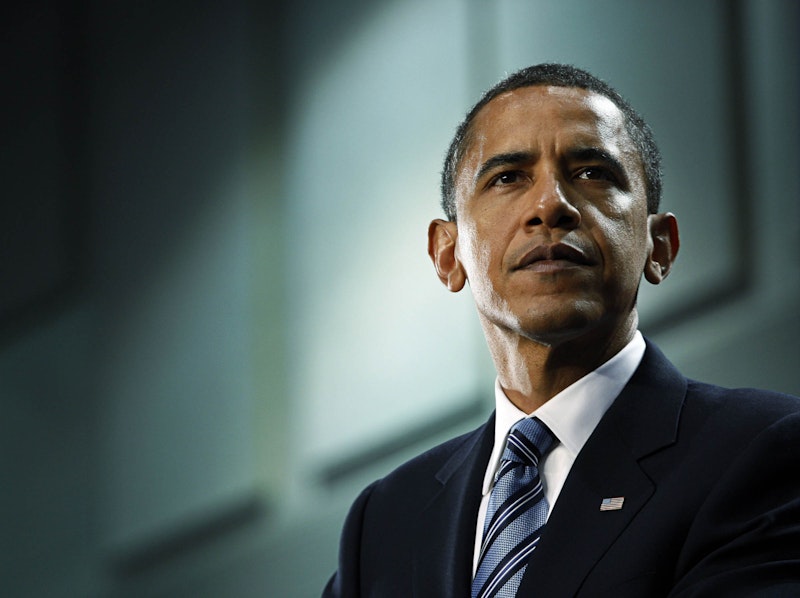 I credit Ishmael Reed for saying in Sunday’s New York Times what no one else would during the recent uproar over Obama’s refusal to “man up” or “fight back:” if the President were to do so his enemies would lurch at the opportunity to label him an angry black man reminiscent of Othello. Some have already smeared him in this fashion despite his calm demeanor, whether it’s Glenn Beck’s infamous charge that Obama has a “deep-seated hatred for white people” or the obscenely titled diatribe, The Roots of Obama’s Rage, by Dinesh D’souza. But Obama has admirably avoided falling into the Othello trap of reacting with rage.

In a brutally candid op-ed, Reed discusses his own brush-ups with white progressives. When he dared to publish a piece of literary criticism that points to Huck Finn as evidence that “Some white women managed household slaves, a departure from the revisionist theory that sees Scarlett O’Hara as some kind of feminist martyr,” a respected progressive critic called it “rowdy.” When he highlighted the pervasiveness of neo-Nazis and Holocaust deniers in the Tea Party movement during a discussion with a leading progressive, the latter described him as a “bully.”

These episodes fit into the paradigm established by Reed’s white teachers when he was growing up. They often penalized him for his strong tone, dismissing his attitude as annoying, and he says they “gave me the grades to prove” that they felt this way.
As such, Reed understands the added pressure Obama must feel as a black man. If the President were to emulate Harry Truman by screaming down his Republican foes, as many liberals urge, “his grade would go from a B- to a D.” Reed continues: “What the progressives forget is that black intellectuals have been called ‘paranoid,’ ‘bitter,’ ‘rowdy,’ ‘angry,’ ‘bullies,’ and accused of tirades and diatribes for more than 100 years.”

Reed’s most salient point: “When these progressives refer to themselves as Mr. Obama’s base, all they see is themselves,” since polls show strong support for the President among blacks and Latinos. The idea of Democrats forcing a primary challenge for 2012 would therefore “lose the black vote forever.”

The concluding paragraph is most poignant: “Unlike white progressives, blacks and Latinos are not used to getting it all. They know how it feels to be unemployed and unable to buy your children Christmas presents. They know when not to shout. The president, the coolest man in the room, who worked among the unemployed in Chicago, knows too.”

Now, Reed’s critique of “white progressives” is a bit unfair, since the goal of their movement is, after all, to help minorities. But he touches upon a bigger issue that few have dared to broach during the Obama era. That is, the Othello phenomenon. One of the most impressive aspects of Obama’s leadership has been his ability to maintain his composure in the face of endless vicious incitement. This is important for any president, but as a black president the stakes are higher, since he risks falling into the Othello trap of having his authority undermined by the widespread racist impulse to perceive men of color as unable to maintain their dignity and quick to succumb to atavistic behavior when provoked.

And he has been strongly tested at every turn. The most prominent smear campaign launched by the right from the start draws directly from Iago’s playbook. Taking advantage of Obama’s skin color and the fact that he lived abroad for a few years as a child, conservatives have tirelessly sought to portray the President as “the other.” Calling him a communist, socialist, terrorist, Muslim, African witch doctor, etc., all really amount to the same thing: he’s black and not one of us.

This helps us understand why the attacks against Obama have taken on a whole new dimension of perversion and vitriol compared to those launched against previous presidents. It was once controversial to accuse a president of being un-American, but casually claiming he’s not even a citizen is something else.

This is not to say that Obama’s critics are all racists. Many have substantive arguments. And many other presidents have been depicted as carriers of insidious surreptitious agendas: the John Birch Society believed that Eisenhower was a secret communist, the radical right saw sinister elements in George H. W. Bush’s New World Order speech, and George W. Bush has been accused of being a covert Nazi.

But the overwhelming abundance and popularity of disgusting assaults on Obama’s character are unprecedented. The fact that almost 20 percent of the population believes he’s a Muslim suggests that many people want to believe the worst, i.e., that he’s a terrorist (never mind that his counterterrorism policy is arguably the toughest in American history.

And they have used this tactic to delegitimize his presidency and his agendas. Many Americans, most of whom have no problem with Bush’s 2000 election, have convinced themselves that Obama’s landslide victory in 2008 was illegitimate for a number of fantastical reasons, chief among which is his alleged lack of a birth certificate.

This, I am convinced, is the real impetus for the birth of the Tea Party movement, whose leadership is crammed with birthers: more than a reaction to the bailouts and budget deficits, it’s a repudiation of a black Democrat’s right to run America by harking to the founders’ backlash against “taxation without representation” in an effort to “take our country back.” They perceive the Obama administration as a pack of Chicago thugs bent on stealing money from average Americans by raising taxes and subverting the government. The true purpose of the Tea Party is to reject the idea that a Democrat, who is also black to boot, could possibly represent the American people (I am not saying they all hate him only because he's black, but they are inclined to detest him first for being a Democrat, and for many the fact that he's black sharpens their disdain—presumably, many would be content if Clarence Thomas were in charge), and for some, particularly the pervasive white supremacist strands of the movement, the push to “take our country back” signals nothing more or less than a yearning to revert to the days when white men ruled.

If matters were otherwise the Tea Party would have emerged when Bush was still president, since he initiated TARP, ran up massive deficits throughout his presidency, exceeding a trillion dollars like Obama at the end, and he expanded the reach of government in previously unimaginable ways. How else can one explain why nearly 60 percent of Tea Partiers persist in the belief that Obama is not a citizen or at the very least may not be one and that he has raised taxes when he has in fact consistently cut taxes?  And why do they hysterically decry health care reform as harmful to the national debt even though it will reduce deficits? And what other message can they possibly be sending by pitting Obama as the equivalent of our founders’ chief enemy—imperialist Britain?

But, to his credit, Obama has not fallen prey to his enemies’ traps. Shortly before Othello commits suicide, he declares that he is “one not easily jealous, but being wrought perplex’d in the extreme.”   Whether the first clause of that statement is true or not is a matter of debate, but Othello indubitably becomes “perplex’d in the extreme.” “Perplex’d” is the perfect word because he could have said “defeated,” or “jealous” or “tormented,” etc., but “perplex’d” contains all the biting sentiments of his downfall—confusion, betrayal, bitterness, anger, defeat…  It signifies an utter loss of control.

Obama is likewise “not easily jealous” or overly sensitive, but the key is he never allows himself to become “perplex’d in the extreme” either. He has always practiced his style of politics, which promotes calm rationality over hatred and anger. And this is what makes him such a compelling leader. Every time he suffers a political defeat many pundits ask why he doesn’t express rage and fight. No doubt Obama was more upset by the midterm elections than any of his supporters, but, as Ishmael Reed suggests, his principled equanimity in the face of adversity should be a lesson to us all.