A Big Week For the Food and Thought Police

The left continues to eat its own. 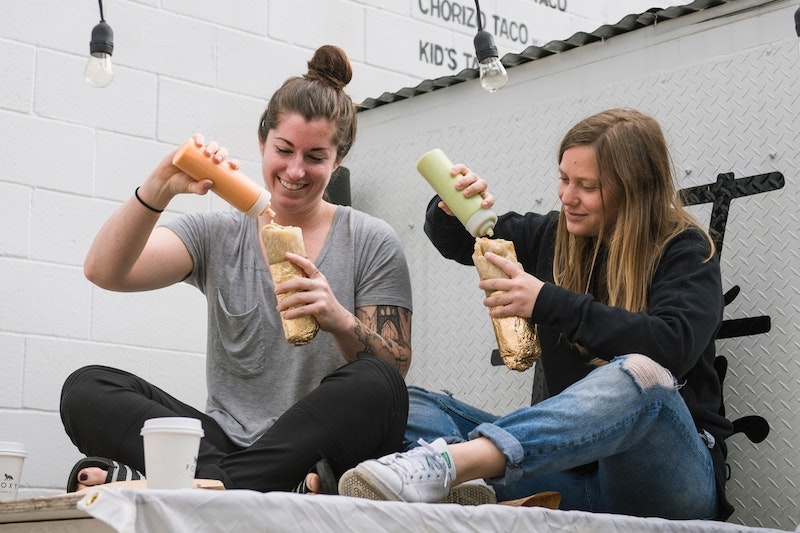 Two white women in Portland who ran a successful food truck selling burritos were forced to shut it down after media outlets covered their “cultural appropriation.” A white professor at Evergreen State College wrote a thoughtful email explaining why he disagreed with an event called Day of Absence, whose organizers were calling for white people to stay off campus, and an angry mob of students confronted him, shouting him down as he tried to explain himself.

The media gave plenty of coverage to both these stories this week, once again highlighting the tactics of oppression that postmodern groupthink has introduced to American public debate. Perceived offenders against “social justice” are identified, quickly taken, and not afforded an opportunity to defend themselves. The self-righteous mob, which has placed itself above such “formalities,” knows it is never wrong.

Social justice is whatever its capricious soldiers declare it. A soldier happening to read an article about the restaurant you opened may decide you're the wrong color to sell burritos and stoke anger in the burgeoning outrage community. The Portland Mercury and Mic ran articles attacking Kali Wilgus and Liz Connelly for their “cultural appropriation” for opening Kooks Burritos, and soon they were forced to close their business. Bret Weinstein’s mob demanded his resignation. The mob always wants penalties imposed.

The Portland Mercury broke the appropriation story, prefacing its condemnation of Kooks Burritos with: “This week in white nonsense.” Writer Jagger Blaec, a black woman, accused the entrepreneurs of stealing their recipes from abuelitas they'd talked to on a trip to Mexico. “Culinary white supremacy” is what she calls it. Blaec writes that they decided to “pack up all their stolen intellectual property and repackage it in one of the few places where such a business could plausibly work: Portland, Oregon.” Perhaps some readers actually believe that many wouldn't buy burritos in thousands of towns across the U.S. based simply on the race of their makers.

Mic, always on the prowl for a good race-baiting piece, picked up the story and presented it to a wider audience of overly-concerned handwringers. Jamilah King, a black woman, starts: “There's a long simmering conversation in the food world about cultural appropriation—about who's allowed to cook what.” But it's not really a conversation. It's self-appointed food police telling hard-working restaurant owners what they're “allowed” to cook “for profit,” as if making money selling food were easy. King wants to make this a story, but it's not. This is how it works in the restaurant business. Budding chefs travel the world in search of inspiration before coming home to open their own place.

Bret Weinstein objected to a change in the formulation of the Day of Absence at Evergreen State, making the distinction between voluntary absence and “a group encouraging another group to go away.” “On a college campus,” he wrote, “one's right to speak—or to be—must never be based on skin color.” He made it clear he'd be on campus on that day. For these words alone Weinstein was accused of "anti-blackness" and being a “racist.” After shrieking at him, the aggrieved students paraded around campus with a familiar, depressing chant: “Hey-hey! Hey-ho! Bret Weinstein's got to go!”

Call-out culture is all about gathering a mob. The students surrounding Bret Weinstein would’ve been at home in Mao’s Red Guard. Jagger Blaec and Jamilah King didn’t bother to contact Kali Wilgus or Liz Connelly, whose mistake was their candor in speaking to Willamette Week about how they started their business. I'd like to ask these two writers if it's okay for two black women to go down to Mexico and “steal” top secret burrito recipes that nobody else can get their hands on. I'd also like to ask them, as feminists—which they claim to be—why they were so quick to call out two hard-working female entrepreneurs.

George W. Bush’s press secretary, Ari Fleischer, once said people “need to be very careful about what they say." This caused tremendous rage from the left, the same group that's now making it clear that people need to be very careful about what they say. People need to behave like lawyers and parse their words carefully in this era. If the Kooks Burrito women had been more aware of the current level of surveillance, they'd have been more circumspect and still have a food truck. In Bret Weinstein's case, if he’d found a slightly more subtle way to state his case he'd have been safe from the thought police. The people who tell us they're looking out for the dispossessed are often predators now, always on the lookout for a power play. The Portland Mercury called the closing of Kooks Burritos a “victory.” That's all you need to know.