Dance with me on the grave of Roger Ailes. 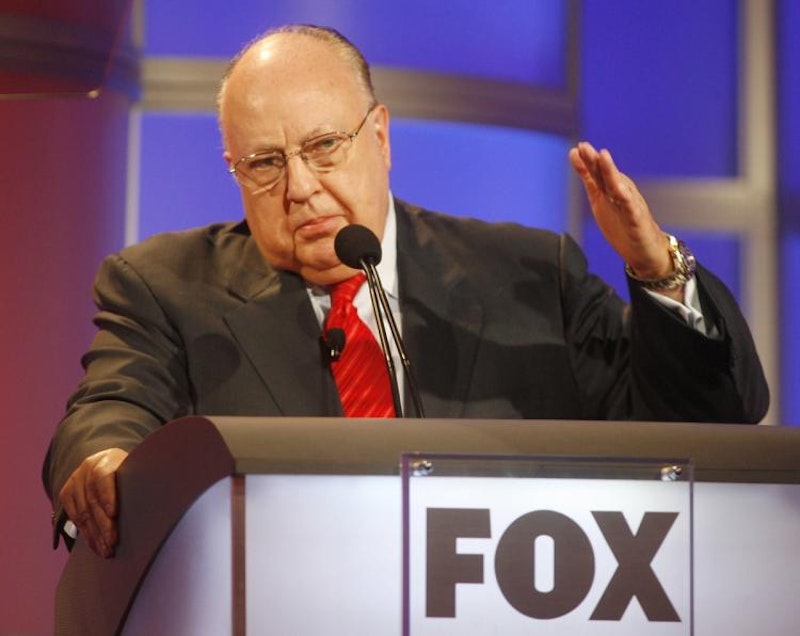 Who knew liberals were so spineless, resorting to giving Roger Ailes respect upon the occasion of his death? Rachel Maddow said, “I considered him to be a friend.” Alec Baldwin chastised a crowd in Manhattan for “dancing on his grave.” He had a family, too, you know. No shit. Who cares? Matt Taibbi is right: Roger Ailes is one of the worst Americans to ever live. He pioneered the concept of news and information as consumer choice, viciously polarized and biased. Fox’s slogan “Fair and Balanced” was a poke in the eye of everyone who thought hypocrisy could continue to be weaponized. It’s hard to tell whether or not Ailes was ahead of his time, or, as Taibbi suggests, shaped the time we’re in. Obviously he wasn’t the only player—nothing did more to erode the foundation of truth than the advent of the Internet. Billions of people carry around pocket computers all day, able to access, consume, and analyze the wealth of human knowledge and world history—but with the death of gatekeepers and the democratization of media, everything has become diluted, bifurcated, and confused.

Taibbi nails Ailes’ most pernicious influence: “Like many con artists, he reflexively targeted the elderly—‘I created a TV network for people from 55 to dead,’ he told Joan Walsh—where he saw billions could be made mining terrifying storylines about the collapse of the simpler America such viewers remembered, correctly or (more often) incorrectly, from their childhoods.” Fifty-five to dead are the people that vote, and they’d been heeding the gospel of O’Reilly until just a few weeks ago. Alternate realities were forged on Fox News: Birtherism, death panels, “traditional” marriage, transgender bathrooms, black on black crime, Sharia law in Texas. CNN, NPR, and even MSNBC are just as guilty of distorting reality and pushing their own biases, like erasing class consciousness and getting wet over war just like the right-wing. Still, the crimes of the two aren’t comparable: Fox News thrived on hatred and ignorance, of foreigners, black people, gay people, women, Muslims. Judith Miller pumping the Iraq War in The New York Times and Brian Williams quoting Leonard Cohen at the sight of missiles launching is contemptible, but it’s not equivalent to agitating and manipulating the largest voting bloc in the United States into a constant tremor of paranoia and fear.

Monica Lewinsky wrote an op-ed for the Times on Monday: “Roger Ailes’ Dream Was My Nightmare.” She writes: “The comments on television and online were excruciating. I ceased being a three-dimensional person. Instead I became a whore, a bimbo, a slut and worse. Just days after the story broke, Fox asked its viewers to vote on this pressing question: Is Monica Lewinsky an ‘average girl’ or a ‘young tramp looking for thrills’?” She reminds us that it wasn’t The Washington Post or Fox News that broke the story: it was Matt Drudge, still the best aesthete and headline writer in media today. Ailes jumped on his train. But Lewinsky was so ahead of her time—watch Barbara Walters try her hardest not to call Lewinsky a whore in this 1999 interview. It’s shocking to see how far we’ve come—Walters is disgusted by Lewinsky (“Sometimes you did what you call ‘phone sex’—a lot of people don’t know what phone sex is.”), but Monica remains unflappable, honest and frank discussing sex, gender roles, and the way women are regarded and held to this suffocating Madonna/whore complex in our society. She’s a survivor, someone the Clintons surely tried to knock off but couldn’t before the story blew open. I’m glad Ailes lived through his own humiliation and deposition. He was here when the world learned that his genitals looked like “raw hamburger.” I love that.

Ailes’ damage is done, but it’s nice to know that last week his brain started bleeding and then he died. A proper way to go, and on the same day as Chris Cornell. I wonder which one is in hell.