Especially now that you doinks have identified it with your own political ideology. 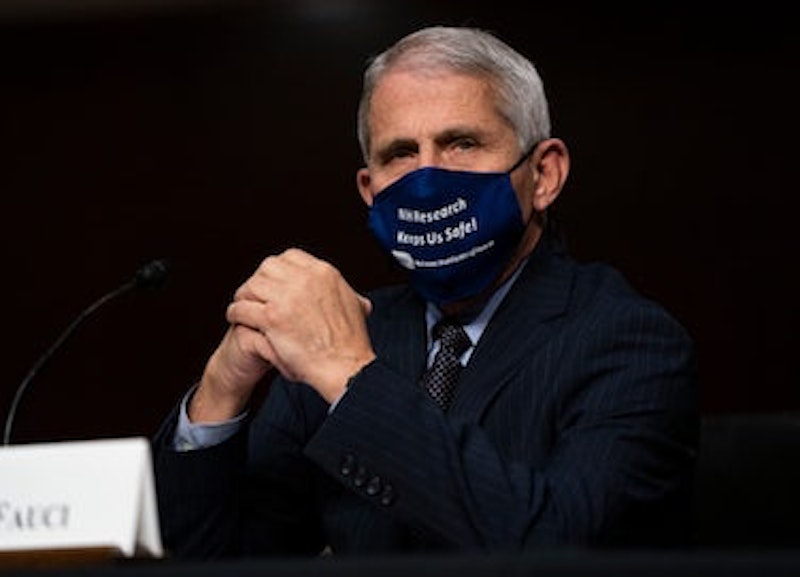 "Science is the truth," says Anthony Fauci frequently, in common with his cultural cohort. All Democrats say the same, and they also insist on a commitment to Science—total epistemic submission to whatever Science may pronounce on any given topic—as central to their political ideology.

This position is unsustainable. And it’s obviously non-scientific. I wonder whether Fauci thinks, for example, that Science can establish its own status as all of and only the Truth. That is: could one imagine scientific experiments or studies that demonstrate that no non-scientific procedure (oh, ordinary sense experience, for example, or the arts) could yield any truth? First, we'd have to clearly and carefully define “Science.” Unfortunately, defining terms, as it shows when it thrashes around with “Truth,” isn’t Science's strength.

This position that Science is Truth might mean any of several things. It might mean that whatever Science has declared (let's assume for a second that Science can make declarations) was true when Science declared it. For example, Aristotelian physics was true until around 1700, when the physical laws of the universe shifted profoundly. They shifted again early in the 20th century under Einstein's auspices. Coffee, olive oil or red wine was good for you, then bad for you, then good for you. Homosexuality was once actually an illness, now it's a sign of good health. There was no reason to mask up in February; now it's better than a vaccine. The universe was once in a steady state, but now it's expanding.

Or "Science is Truth" might mean that whatever Science declares right now is the eternal Truth, though what it proclaimed 20 years ago was liable to be false. On this picture, by 2015 or a week ago Wednesday or whenever it happened to be, Science had jettisoned all error. Now, knowing that to be the case would evidently require a standard of truth external to science. Such a standard is impossible if Science is the Truth.

"One of the problems we face in the United States," Fauci said in June, "is that unfortunately, there is a combination of an anti-science bias that people are—for reasons that sometimes are, you know, inconceivable and not understandable—they just don't believe science and they don't believe authority." Even if Science is Truth, such formulations strongly suggest that Fauci and his fellow devotees could’ve benefited from some English classes. That you have and are the Truth, an avatar of Reality, doesn’t entail that you can express yourself coherently. But one thing he's clear about right there: the identity of Science and Authority.

Science was once conceived as, let's say, a family of techniques for close and careful and systematic empirical observation. But contrary to various middle-school lectures, I don't think it ever amounted to a single, clearly formulaic method. It includes the techniques of astronomers (instrument-aided observation), psychology (undergraduate questionnaires), experimental chemistry (hypothesis and reproducible test), medicine (double-blind placebo studies), anthropology (immersion and empathy), and economics (statistics), among many other procedures.

But the way people are thinking about science right now is as a moral system and a political ideology (I capitalize the word to indicate this use): "We always follow the Science in the Democratic Party," says party chairman Tom Perez, and Joe Biden describes himself and his people as "science followers" every day. "The GOP has a long history of ignoring science," writes Matthew Dallek in The Washington Post, and Trump is the worst of all, of course: "That’s because he sees science less as a normative value, a thing that enables progress, and more as a political tool," with regard to things like vaccines and wildfires.

It's too bad if Trump is using Science as a political tool, but what I want to focus on is the flat declaration that Science is a "normative value." I don't think science is serviceable in that capacity, and you had better decide right now whether it's a method for getting the truth about the world or a progressive political ideology. And if it is a progressive normative theory and political philosophy, and you’re a progressive, then banning or ridiculing what you're calling "science denialism" is just banning and ridiculing opposition to your political leanings, isn't it? And Dallek thinks Trump's use of science is self-serving.

I think the relentless emphasis on Science as Truth is a rhetorical ploy, a way to trap and discredit the opponents of the self-described Science fundamentalists. But it’s a terrible rhetorical move. You're asking me to wear a mask, and giving as a reason that I have to accept Science, which is like saying that the reason I shouldn't be unkind to people is because I have to accept Religion, or Morality. In other words, you're trying to get me to do something fairly modest and commonsensical, and you're justifying that by insisting that I have to accept a giant cloud of assertions, most of which I haven't even heard. To persuade me to wear a mask, you think you have to make me accept indefinitely many other assertions to which it is not even related (e.g. "the universe is expanding").

But far be it from me to be a "science denialist": for one thing, to deny something sensibly, you've got to know what it is. I don’t believe that “science,” much less “Science,” can be defined in a way that includes all its central disciplines and procedures. “Denying” science would entail denying a history of millions of factual assertions (many of which contradict each other). I've got no idea what I'd be denying if I denied science, for the most part, just as you've got no idea what you're affirming when you affirm it.

Bludgeoning everybody all the time with Science is a terrible rhetorical strategy, and a notably irrational style of argumentation. So yes, I’m wearing a mask, but no: until you can give me some clear notion of what you're asking me to accept, I don’t accept Science, and I’ll be assessing its claims piecemeal and not accepting things just because the person who said it has a Ph.D. or because I’m desperate for some authority to tell me what to believe.

But if I were, I'd be looking for someone a bit more eloquent than Fauci.