The Paradox of the Political Left

How it helps achieve what it's against. 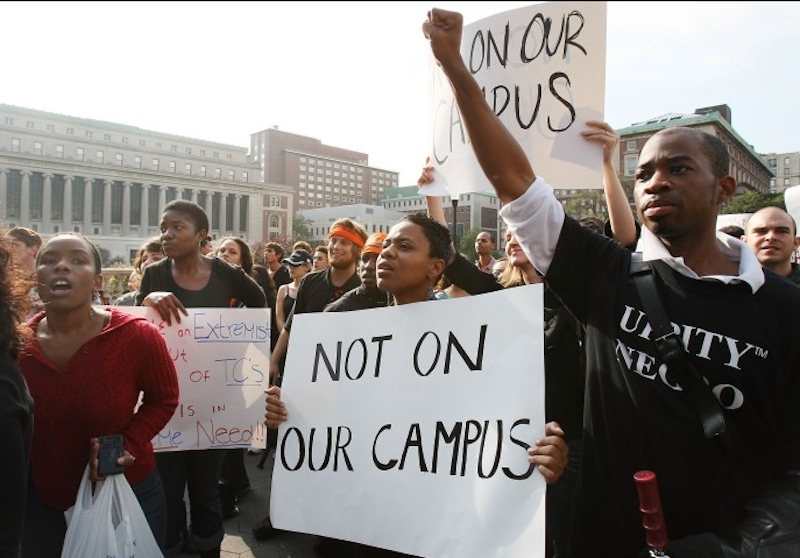 American college campuses are nuts currently, typified by Stanford’s acceptance of someone who wrote #BlackLivesMatter 100 times in answer to an application question. Victimhood status is the currency, and the competition's fierce. The only group that doesn't stand a chance in that battle are straight white males, those privileged princes. Their only shot at gaining status is to advocate for the less-privileged, as in taking a firm stand against the appropriation of marginalized cultures. Patrolling campus Cinco de Mayo parties for sombreros, for example.

The left is trying to build up the marginalized students while slighting the straight white males, but the opposite happens. The privileged aren't shielded from adversity, so they’re the only ones who graduate as stronger people. The ones cast out of their safe spaces into the real world find themselves much less prepared to deal with their new and harsher reality, a place not designed as their own personal sanctuary.

This is but one chapter in the strange story of the political left, a movement so confused and rudderless that it often works to achieve what it opposes. The political left’s usually more fueled by emotion than strategic thinking, and it often embraces a Manichean worldview where it's us against them—good versus evil. Actions based on a flawed vision will produce unexpected results.

People on the left are big on empathy, which doesn't always work out, but nevertheless makes them feel better. Take the issue of development aid to third-world nations. Liberals have traditionally viewed giving impoverished nations handouts as the morally and practically correct approach, but aid workers, economists, and experts in the recipient nations have long seen the folly of this. Poverty is often caused by political systems designed to enrich the wealthy. Handing cash to such governments, rather than providing incentives for systemic change, produces predictable results.

Donald Trump was the liberals’ nightmare candidate, but they helped elect him. Last year's election marked the first time large numbers of voters voted just out of spite for the opposition, a dangerous precedent with plenty of negative ramifications. The same thing happened in the U.K. when people got fed up with the metropolitan elite calling them names and voted for Brexit, even though many had no idea what the actual issue was.

The political left indiscriminately calls people they disagree with bigots, racists, and Islamophobes. It does nothing to stop bigotry. Sometimes Democrats come right out and admit they want to silence people, like Idaho Democrat Sally Boynton Brown in January when she said, “My job is to shut other white people down when they want to interrupt.” This is self-destructive rhetoric.

When campus leftists tried so hard to shut down Milo Yiannopoulos last year, and Jack Dorsey took him off Twitter, all it did was call attention to the conservative provocateur and get him TV interviews and a big book advance (since rescinded). The protesters who thought they could squelch his poisonous words ended up becoming his promoters. With a less emotional, more strategic approach that correctly identified him as a provocateur who should be ignored, Yiannopoulos would’ve spoken to small groups on campuses without the interference he thrives on, and the media would have laid off it.

The intersectionality the left’s embraced has added to its tendency to work against its own goals. There's no way that someone like Muslim crusader and Saudi Arabia fan Linda Sarsour could have risen to such prominence without it. Now you have a Sharia-loving, high-profile feminist leader who wears a hijab, that symbol of male oppression, who’s said horribly sexist things about other women. This will only serve to drive more women away from the already moribund movement of third-wave feminism, which three out of four women already aren't interested in.

And then you have the left's propensity to champion minority groups who aren't content to seek a deserved equality, but rather demand total acceptance from society, which isn't realistic. Transgender activists are an example, with their insistence that people learn a whole new set of pronouns or be labeled as bigots. You can't force people to accept concepts their backgrounds may make them resistant to.

The left’s main problem is that it's embraced multiculturalism in a way that's jeopardized its other values like individual liberty, free speech, and tolerance. The regressive leftists who’ve co-opted the movement no longer respect the tenets of liberal democracy, especially when there's a potential conflict with the values of marginalized groups. They practice a mirror-image nationalism where reverence for the “other” replaces worship of one's own group.