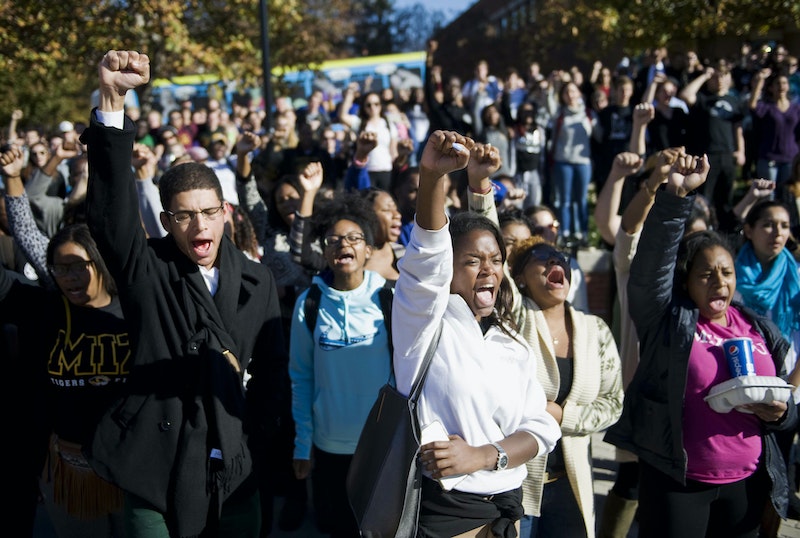 When conservative firebrand and Daily Wire editor-in-chief Ben Shapiro gave a talk at the University of Wisconsin-Madison last week, student crybully protestors interrupted him with loud chants of “safety.” Forced to pause, Shapiro flipped them off with two middle fingers and had a short chat with an audience member who called him a “white supremacist.” He asked how she knew that, and she replied, “That's the image you give off.” Shapiro then sarcastically asked her if it was the yarmulke he was wearing that tipped her off.

In fact, the rabidly anti-Trump Shapiro probably gets more online abuse than any other journalist from the most virulent of the alt-right white supremacists, some of whom tweeted Nazi-related messages (e.g. “Into the gas chamber with all 4 of you”) at him when his son was born in May.

At one time, calling someone a white supremacist meant something. Due diligence was a prerequisite for such a damning accusation. College activists now bandy the term around so casually that they lump in Orthodox Jews with the KKK. The confused student Shapiro chatted with, following the norms of her pack, was also shouting out that all those in attendance at the event were also white supremacists. She's emblematic of a self-involved on-campus political movement that sees itself as championing liberal values, while in practice they flaunt them.

At least they let Shapiro speak in Wisconsin. Last week, Chicago’s DePaul University banned him from appearing at an event that also featured feminist theorist Christina Hoff Sommers. The theme: “campus tolerance.” “Tolerance” only for politically correct ideas, that is, which isn't any sort of tolerance at all. DePaul administrators claimed that Shapiro presented too much of a security threat, but they phrased it incorrectly. The only threat posed was from their own students. A squad of 30 cops showed up to ensure that Shapiro didn't set foot on campus, even though no protestors showed up. He witheringly remarked that it was a bit of an overreaction to deal with “a 5’9,” 165 Jewish guy.” That one got a good laugh from the crowd.

Last year, DePaul had no problem allowing Rasmieh Odeh, a convicted (life sentence, released through a prisoner exchange) terrorist involved in the 1969 bombing of a Jerusalem supermarket that killed two students, to be honored at an event held by Students for Justice in Palestine, a national organization with an anti-Israel agenda. Protestors held a peaceful vigil outside of that event.

What Shapiro has experienced is just one more sign that the organized, vocal left at American colleges, despite its claims, is no longer liberal. In February, he faced violence from students at Cal State-Los Angeles when he gave a speech called, “When Diversity Becomes a Problem” that some critics said would promote “anti-blackness.” Approximately 150 protesters blocked entrances to the auditorium, trapping Shapiro and his audience inside, and someone set off a fire alarm.

The Cal State event, which nearly erupted into a riot, demonstrated that violence on campus is now accepted as a tactic of protest. Violence isn't a liberal value. But tell that to Cal State-LA sociology professor Robert Weide, who ludicrously challenged Shapiro's student fans to fight him on a wrestling mat in the gym at “1 p.m. on Friday,” warning them with, “Heads up though, I lift bro.”

Censorship is also not a liberal value, but Shapiro and many others on campuses throughout the country have been consistently censored. When college officials hide behind “security” concerns, they’re tacitly admitting that their own students can't react to an opposing viewpoint without becoming security risks. They’re enabling censorship while abdicating their responsibility to uphold standards of academic freedom and free expression.

Allowing group identity to trump individual rights is another illiberal value the intolerant left has established on college campuses. When you hear “words matter” from campus activists, that means they won't tolerate the liberal value of free speech when a particular minority group may take offense at someone like Ben Shapiro's words. What's lost on them is that the concept of free speech has no meaning whatsoever if it doesn't include the right to offend. Safe spaces where only one point of view can be expressed are actually havens for thought totalitarians.

Campus activists now routinely employ fear and intimidation to stifle honest debate. They pretend to occupy the moral high ground to immunize themselves from criticism for their illiberal ways while pushing the concept of their victimhood in what is essentially little more than a thinly-disguised power play. They favor emotion-based appeals to group identity over rational discussion. This is anti-intellectualism and anti-empiricism at its worst. These people aren't liberals. The media and everyone else should stop calling them that.