Will we ever realize it? 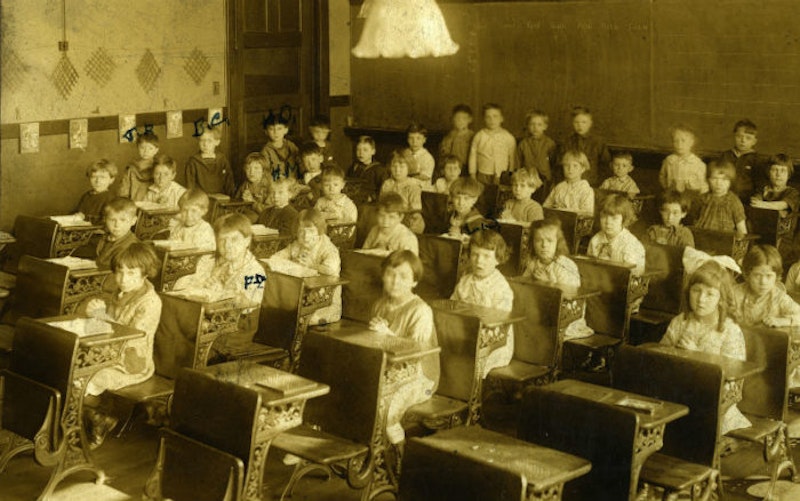 A lot of what seems morally obvious to us—that slavery’s wrong, or that men aren't smarter than women—did not seem so obvious a few centuries ago. From the vantage point of today, it's amazing how morally obtuse Jefferson was when it came to his own practice of slavery, for example, and it's amazing too that his society backed him up in his judgments. Of course, people of the past, as they advocated torture for heretics or whatever it may be, weren't aware of their own irrationality or evil. Perhaps they were even congratulating themselves on their own goodness, as Jefferson does from time to time.

That might make us wonder whether there are things we ourselves do that, a century or two hence, might cause our posterity (if any) to be morally embarrassed on our behalf. What are we wrong about that we don't know we're wrong about? By hypothesis, we don't know much about that now; but still, I’m going to speculate.

My candidate is compulsory education. Left and right, up and down, we take it for granted, but as a whole society, I think it’s the worst thing we do. And we do it to children. It appears to run afoul of traditional moral restrictions and even actual statutes with regard to kidnapping, child labor, and child slavery. It's unconscionable.

Yes, I’m aware of the justifications. Democracy requires a literate, informed citizenry. Education is the key to increasing equality or improving the lives of those lowest down. We need to produce workers with the skills that will keep America productive in the next few decades. And so on.

The last of these justifications shows you that we are, indeed, dealing with child labor. Read the columns of Thomas Friedman, for example, or listen to Arne Duncan, and note that the argument entirely revolves around economic productivity. Toiling in standardized-test sweatshops seven hours a day is the contribution of all eight-year-olds to the American economy. Their gestures are more repetitive than Charlie Chaplin's, working the assembly line in Modern Times. They're in an efficiency race with the children of Finland and Singapore, and they’re losing. So we must unleash yet another wave of reform.

As to the egalitarian justifications, elementary and some secondary education has been compulsory in all states of the union for 100 years. Has the effect actually been egalitarian? I think rather the reverse, and the “dysfunctions” of schools in poor areas have been criticized and reformed in every generation, persisting or expanding throughout. The difference between the suburban public or private school and that big semi-jail downtown only helps recapitulate the entire hierarchy, freeze it in place, and hand it to the next generation. That was true in 1916 and it’s true today. How many waves of reform will it take before we declare the strategy to be a failure?

As to universal literacy, it depends what you mean by literacy. There's not much point in producing more five-paragraph essays, I think.

Public education arose in the late 19th and early 20th centuries in concert with visions of social control such as eugenics and the beginnings of American mass incarceration. The point was to control populations and redirect them to become and to reproduce reliable workers in a capitalist economy, or to turn them out as a standard product for employers. And the point was specifically to remove children from households whose values did not comport with what we might call bourgeois white norms. Universal compulsory education also coincided with the kidnapping/re-education of American Indian children, and has always been a center of cultural destruction and indoctrination as well as uplift.

Indeed, to put governments in charge of the education of children is to make those children's lives subject to political moods and movements, and public school curricula are subject to political fads one way or another all over the country. Always picture that machine in the hands of the sort of people you disagree with, because that can happen.

The people who are going to cure or remake our children are no better than average, putting it mildly. We can't transcend ourselves or teach our children to be better than we are. We're still stuck back here, not knowing that we don't know what we don't know. But at any rate the world of education reform is faddish and empty and inculcates an automatism reflecting its own.

But whatever the effects of the program of the moment, we need to ask ourselves: in virtue of what qualifications do we, or whomever, claim the right to remake other peoples' children? We need to ask what we are not seeing about our own evil.

—Crispin Sartwell is the co-author of the YA novel Spyder's Rebellion.