What are you going to do, put me in Zoom detention? 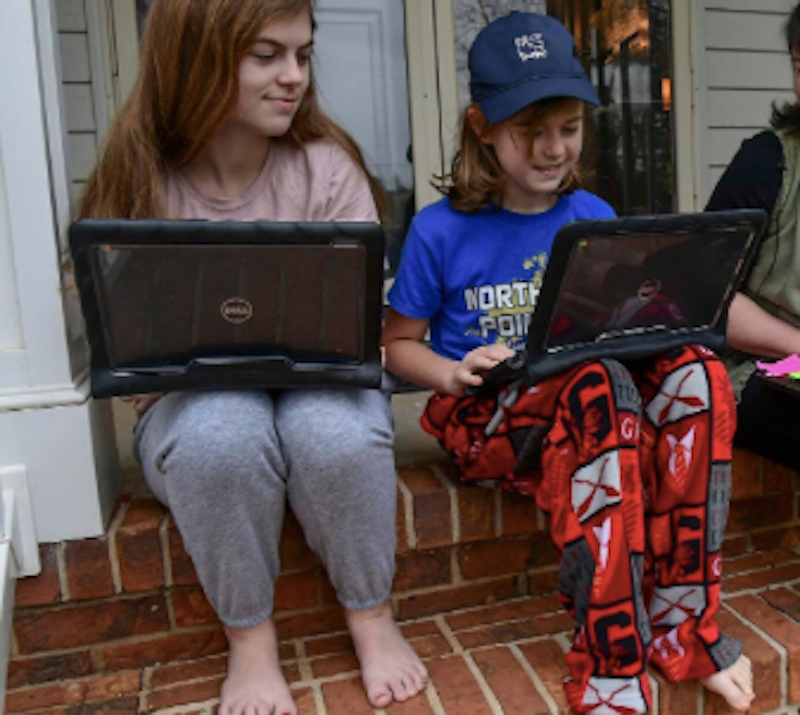 The Springfield, Illinois school district's declaration that it will attempt to enforce its dress code even if the students are taking classes remotely is an example of myriad dilemmas faced by schools in the pandemic, in which attendance is at once compulsory and prohibited or curtailed. The "director of student support" for the district, Jason Wind, said, “We don’t need students in pajamas and all those other things while on their Zoom conferences." They want students sitting up straight at a desk, not (for example) reclining on a bed. No hats, sunglasses, bandannas. Students can't wear "extremely baggy" clothing, for example, at home. Congress may need to pass a national children's dress code. Before any new laws, however, they'll need several constitutional amendments.

As education dissolves from the buildings in which it was housed, it loses control of the minute-by-minute self-presentation and movement of children. But now it wants to take its tiny totalitarianism, its "student support," everywhere. The martinets of public education have escaped their cages and now want to infest children's bedrooms. In general, Wind's "We don't need x," is about as good an argument as you get for particular prohibitions, and the reasoning is as sharp now as it was in 1970. Your pajamas (or for the matter your political t-shirt) will "disrupt the learning environment." But the learning environment on Zoom is a lot different than that in that big building on the hill, and it's going to end up encompassing millions of homes.

It's not clear how effective their rules can be if they don't directly control the physical space. If this goes on long enough, they may try that too, sending in a crew to install bells, metal detectors, "drug-free-zone" signs, and inspiring yet empty posters in every home and on every street in America. Either the school is disappearing entirely or it’s spreading universally.

If I were a kid now, I might be missing live school, particularly the "social aspect" and the "getting-out-of-the-house" aspect. But I definitely wouldn’t be missing bureaucrats telling me what I can and can’t wear. In some ways, school dress codes are a relatively trivial matter, but when I was in public school I experienced the dress code as a direct daily violation of my autonomy. That they were telling me what to wear was a nice symbol, I thought, of all the petty insults to which students are continually subjected. By the time I was 13, when I was outside the school zone I didn't (usually) need an external authority's permission to speak, stand, go to the bathroom, or leave. When I was inside it, people I hardly knew thought they could legitimately control all of us in all these respects.

I was suspended several times for pointedly wearing the wrong outfits, outfits that "disrupted the learning environment." I'm not sure how I would have responded if A. Lyman Warner, the principal of Alice Deal Junior High School in DC, had tried to police my outfits when I was away from the school. I hope I'd find the claim that he had any right to do so laughable, but lord it would also piss the hell out me.

In general the martinets of public education operate only on school grounds. School administrators (usually) don't hover over your family dinner table gazing intently at the children and suddenly bellowing, "This is going on your permanent record!" At your own place, one would think, school administrators can't police hairstyles, political buttons or reading matter. One problem for educators is how to convey the arts and sciences over Zoom. Another is how to reproduce the disciplinary regime when everyone’s scattered and children's desks are in their own bedrooms (if they have bedrooms). I think that the primary point of compulsory education was always the compulsion and not the education: we conceive education primarily as "socialization"—that is, producing people who pull together or, looking at it another way, are comfortable with their own disempowerment—rather than as conveying information to young people.

You can feel the anxiety of school administrators as they lose control of the bodies of students and think anxiously about whether or how it can re-asserted virtually, or how a virtual violation can be punished actually. Let's say a kid is unruly on Zoom or is engaged in a side-chat with her virtual neighbor, or leaves her camera rolling as she watches Tik Toks. Say she goes out for a stroll or takes a bathroom break. What are you going to do? Put her detention in a Zoom breakout room? Watcha gonna do, teach, mute me? Oh no!

According to the article on the Springfield situation in the Times, the approach is getting resistance from parents and from students, for extremely good reasons. One mother sensibly asks, “How much hassle are you going to give the parent with four kids, working a full-time job trying to support their kids, and their kid attended the Zoom meeting, but he was in pajamas?” Her son was more concise: "It sounds stupid." But even if enforcement of school rules in other people's homes proves impossible, or induces chaos that itself disrupts the (Zoom) learning environment (such as it is), I have a feeling that America's school administrators are not going to stop trying.