It was a “perk” I could do without. 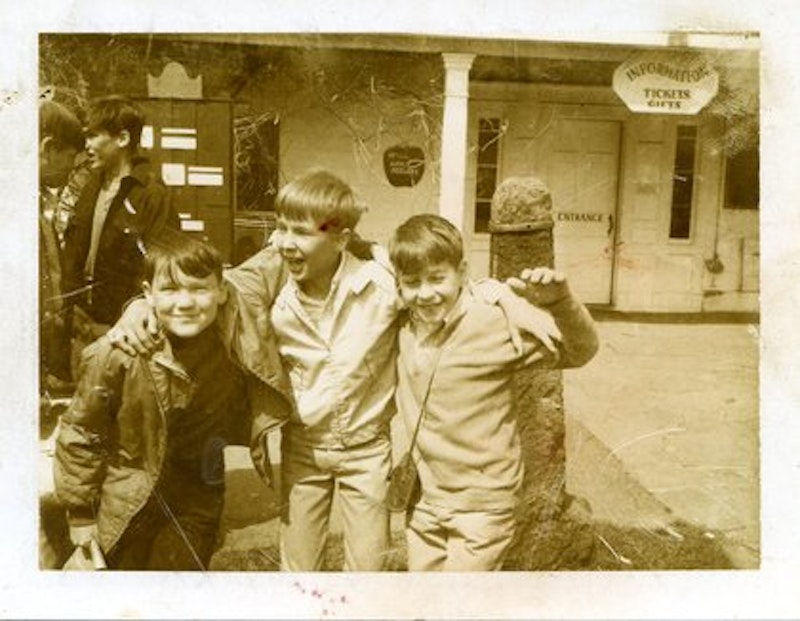 Aside from the tedium of pointless homework (grammatical charts celebrating the gerund, for example) and the futility of climbing a rope in gym class, I didn’t find much to complain about as a public school student in Huntington, New York. Lots of friends, several smart teachers, one or two engaging extracurricular activities and hot lunches that were better than I had at home, contributed to a happy childhood. It was the 1960s/70s and the progression from Southdown Elementary to Simpson Jr. High to Huntington High was, as you might expect, infused with the events of the era. The Beatles, of course, in third grade; slight jealousy at more affluent kids whose parents could afford to buy them knock-off Carnaby Street polka-dot and paisley shirts, Garrison belts and pegged pants; the attempt to comprehend the Watts riots and the political assassinations; listening to the World Series (all day games) on a transistor radio at recess; and a very cool 10th grade English teacher, Mr. Leonard, who, in addition to assigning Kurt Vonnegut, also encouraged us to bring our favorite albums to class. One spring day, there was a sit-in at Huntington High over the lack of black studies, and I ran into to Mr. Leonard before it began and told him I’d miss class. He smiled, and said, “Right on!”

I didn’t get in trouble often, but when incidents occurred, the outcome usually fell into the no harm/no foul category, at least in my mind. One time my parents were called for a disciplinary meeting at Simpson—not their idea of a productive 45 minutes—because I’d written an editorial in the school paper, The Echo, and called the assistant principal “King Karl,” probably because he was attempting to mandate short hair or stricter dress codes, the kind of thing clueless suburban bureaucrats were paid to do at the time. It was ticklish for Mom and Dad, since the chief principal, Emory Bromsted, was a family friend who knew all four of my brothers who’d preceded me at the then-crumbling school. As it happened, I didn’t give an inch, citing the First Amendment, and when my parents agreed with me, an anguished Mr. Bromsted, no doubt thinking, “Like I need this shit?” acquiesced and freedom of the press was no longer in danger. That night, Mom and Dad, while delivering a standard-issue warning that such infractions could show up on my transcript for college, were pleased with the result and the three of us had a rare dinner out, at the quirky Silver Platter in downtown Huntington.

But one activity, no matter what grade, that I despised was “field trips.” Might’ve been an odd duck on this one, since the majority of students relished a day off from classes and the opportunity to cut up on the long bus rides to and from whatever museum, pumpkin patch, dairy farm (like I hadn’t seen a cow before?) or Broadway musical we were shuttled to. The yellow buses lined up at 8:30, head counts were taken for the first time (and repeated endlessly during the day) and the teachers/parents acting as guardians took their mission very seriously, in hindsight, with the sadistic satisfaction of Sgt. Hartman in Stanley Kubrick’s magnificent Full Metal Jacket. Manhattan was, theoretically, an hour away, so that was a frequent locale, but there was the Long Island Expressway to negotiate, at rush hour both ways, so the stop-and-start and nattering among the assembled was fairly torturous.

One time, returning from the play 1776 (or maybe it was Macbeth), a vivacious girl named Beth Poli took it upon herself to lead the students in a very loud rendition of a TV commercial. “Ay, ay, ay, ay, oh, I am the Frito Bandito,” Beth sang as the frontwoman, and like sheep the others followed, and while it was kind of funny the first time through, eventually I buried my nose in a book and cursed the fact that I hadn’t brought earmuffs.

That trip stuck in my craw, and when, a few months later another venture was upon us, I purposely got in dutch with a teacher and the resulting punishment was that I wasn’t allowed to join my classmates to whatever “cultural enhancement” scheme had been cooked up. Instead, the teacher told me gravely, I’d be confined to the library all day. What a break! Regular school hours, no snarled traffic and I got to read books from nine till three.

Oh, and the overnight trips were just the pits. Actually, the eighth grade trip to Washington, D.C. was pretty cool, since the Jefferson and Lincoln Memorials, the Smithsonian and Capitol overshadowed the overbearing behavior of the teachers. But the year before, we went to Williamsburg, VA, the re-created colonial village that, at least back then, was swarmed with students from all over the East Coast. And it sucked: the guys and gals playing the 18th century Americans were bored stiff (who could blame them), the exhibits depicting typical homes and workplaces seemed entirely fake to me, not at all representative of the time period, and even a re-creation of a battle was lackluster. As always, the gift shops were the main attraction, but I didn’t have much money to blow, and the horehound candy I bought tasted like medicine, although the penny root beer barrels were great. There’s a picture above, of Bobby Walton, Jimmy Braun and me mugging for someone with a Polaroid, and if the shot isn’t especially flattering, well, I wasn’t in the mood.

Two exceptions: in fourth grade, riding home from the Bronx Zoo, pre-renovation, when the animals were caged in their own shit, Bobby Ringler’s mother, having gotten wind that he and I were assigned to a ballbuster of a teacher the next year, schmoozed our current teacher and when the school year was over a few weeks later the two of us got a better draw. Mr. Grad had his own weird—and I’m being polite—idiosyncrasies, but it was a vast difference from the lady who screamed her way through the day.

And in 1970, when The Echo received an award from Columbia Journalism School—probably pro forma—Ricky Morrison and I wandered off into the streets, checked out a record store and bought Crosby, Stills, Nash & Young’s newly-released Déjà Vu. Our absence from the congratulatory ceremony was not discovered.