Reflections on a first schoolyard throw-down. 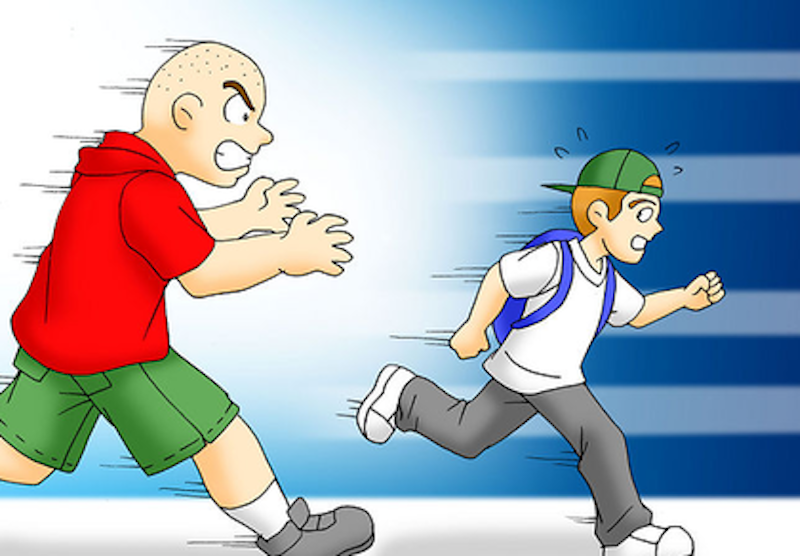 “Hey Josh, now you’re gay!” I yelled. You might think I was the bully here, but he started it. This was in the fifth grade at Sherman Elementary School in Tacoma, Washington, circa 1990. Our class was waiting, unsupervised, outside one of the portables for a music lesson.

Josh McDonald and a few others got bored and started playing a modified version of “fag tag.” If you touched the wall of the portable, you acquired bona fide fag cooties, whatever those were. Even though most of us didn’t really understand the birds and the bees and the giraffes yet, no one wanted that.

When Josh tried to shove me, I sort of Judo-ed him into the aluminum wall instead and mocked him. Josh was red-faced. He came at me swinging. Usually, that’s the point at which the kids start chanting “Fight! Fight! Fight!” but if they did I was too focused for it to register. It was my first ever full-blown school throw-down and it seemed like a bad idea to lose it.

Josh hit me in the face several times before I could lay a hand on him. Either he hit like a preschool girl or my cheekbones proved thick shock absorbers or my brain pumped out enough adrenalin that the shots didn’t register. This led to what Winston Churchill called the exhilaration of being shot at without result. It also occurred that maybe this punching thing was overrated, so I grabbed for him instead.

As it turned out, my opponent was not a good grappler. He kept trying to punch me, without any room to wind up. I tossed him around and then grabbed his wrists and tried to throw him over my back onto the pavement. He slipped out of my grasp by slipping out of his own sweatshirt. The loose sweatshirt proved a good tool to net him, over his head. I had this thing almost in the bag when suddenly I felt a sharp pain in one of my kidneys and fell over.

A girl named Jamie Polk, who must have had a crush on Josh, had intervened with her well-placed fist. Freed from his sweatshirt, Josh jumped on top of me and again went for the face, with about the same effect. I was about to roll over on him, when I looked up and saw Jamie come in from the side and grind her heel into my gut. Fight over.

One of the girls told a teacher, but this was before the era of zero tolerance, and I didn’t want to make a stink. Josh and I were never friends, but he never tried a stunt like that again. Tacoma was not a tranquil place yet that was the one real fight I ever got in before graduation.

Oh sure, Casey Small punched me in the gut in seventh grade and then called me a “piss face!” and ran off when I laughed at him. And a year later Barry Rosey yanked my hair while we were seated in the auditorium and I turned around and punched him square in the chin. These were pretty small echoes of that first throw-down.

Kids talk. By the time I got to high school, no senior tried to haze me and any aggravation by classmates rose to the Barry-Casey level of nuisance. Looking back, I’m glad the fag tag fight turned out the way it did. I’m a reader, not a fighter. If I’d have really curb-stomped Josh, which was possible, tougher kids with something to prove might have sought me out. Instead, I skated by until college as that guy who is probably just a little more trouble than he’s worth to mess with.