And, hey, free speech? Screw you. 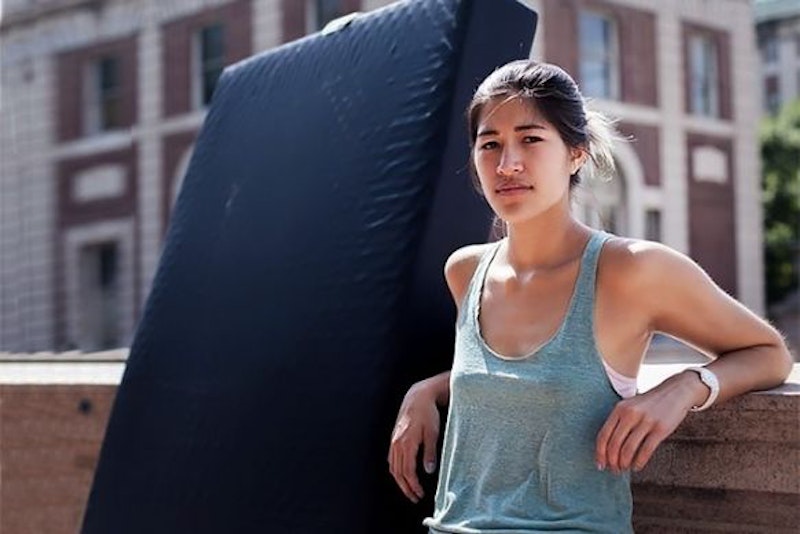 Students, or someone, have put up posters asserting an unpopular position on a controversial issue. Other students, not liking the message, are tearing the posters down so that minds may not be infected with the disapproved thought. One of the country's leading magazines/websites takes a look at the situation and curls its lip. At what? Well, at free speech. The precision is remarkable. New York Magazine zooms right in on our country's finest principle and offers a sneer: “Students have begun sweeping the campus to take down the posters, which—of course—has sparked cries of 'But my free speech!!!'” Well, I should think it would. Suppression of unwanted thought might even spark cries of “But their free speech!” Not at New York.

The posters denigrated Emma Sulkowicz, the Columbia girl who carried a mattress around campus until her graduation this week. Sulkowicz says she was raped by Paul Nungesser, another Columbia student. He says it wasn't rape, just sex. The university investigated and found no reason to believe the girl instead of the boy; this was under the “preponderance of evidence” standard, by which the defendant is cooked if even 51 percent of the evidence indicates guilt. Sulkowicz then began a publicity campaign to shame Nungesser and drive him off campus. The campaign culminated in her nine months of mattress carrying. She wanted the world to know that the boy had raped her. Of course, this isn't something we can know. She has presented no witnesses to the act, no physical evidence, no incriminating texts or emails. His guilt is something many people believe, but it's not something they know.

The posters call Sulkowicz a liar—a “Pretty Little Liar,” which is the phrase planted in big letters next to the girl and her mattress. Of course, we don't know she's a liar. Some of the available evidence hurts her credibility, some helps, and none of it adds up to much. This has sunk in even with Robby Soave, a journalist at Reason who was making dark noises about the chest wound allegedly dealt the girl's credibility by her Facebook exchanges with the boy. On reflection, Soave is no longer so sure: “We have no way to conclusively tell who is lying... the record of messages between them bolsters his side of the story without tipping the scales in any remotely definitive sense.” Better late than never.

Sulkowicz strikes me as a pissy, self-righteous jerk, but jerks can tell the truth. At any rate, the boy doesn't seem like a prize either. Three other students have accused him of misdeeds. Of these accusations, only one sounds heavy: a male ex-friend says the two of them sat down for a conversation and that Nungesser then spent several minutes feeling up the ex-friend's genitals, presumably through the ex-friend's clothing. Columbia investigated and found the accusation not seaworthy. Still, Nungesser seems to have collected some enemies.

One thing is clear: the posters are doing what Sulkowicz did. They are making a nasty accusation that we can take or leave. If it's all right for Sulkowicz to stage her publicity stunt, it's all right for her detractors to answer back. This logic should be familiar to anyone who cares about free speech. But people don't care about free speech, they care about their speech.

Loose ends. Sulkowicz carried her mattress across the stage at commencement and that was the end of it. No more mattress. She received loud cheers and was praised (though not by name) in the commencement speaker's address. But Columbia's president became seriously occupied with his water bottle when Sulkowicz and her mattress hovered near. Perhaps as a result, he did not shake her hand, whereas (we're told) he shook hands with the other graduates. Including Nungesser? One supposes. At any rate, Nungesser received his diploma and got the hell off campus, thereby ending Sulkowicz's self-imposed obligation to mattress-carry.

If a museum wants to buy the mattress, she's willing to sell. Sulkowicz says she bought the thing online, which may be a surprise to the professor who helped her concoct the mattress stunt and who is treating it as her senior thesis. This fellow, who sounds very excitable, told the campus paper about the project's glory back in September: “Carrying around your university bed—which is also the site of your rape—is an amazingly significant and poignant and powerful symbol.” What about carrying a mattress that is not your university bed and not the site of your alleged rape, but which is a whole lot like the original bed and site? I bet the professor doesn't mind. I don't either, it's just that he made such a to-do. If a substitute mattress is also amazingly significant and poignant, then what was the point of all that gush? I guess by this point there's no sense asking that sort of question. Sure, the new mattress is equal to the original, and mattress lugging is equal to art. After all, accusation is equal to proof.