Where the Current Meets the Tide 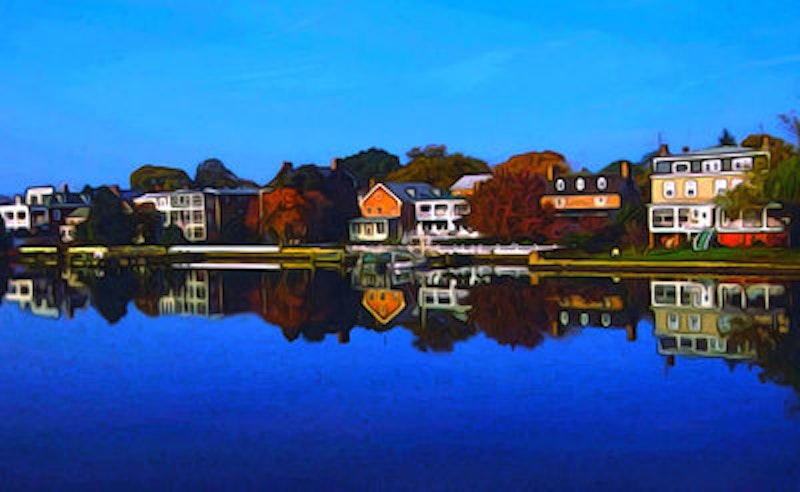 When I returned to Chestertown, Maryland last Friday for Washington College’s reunion weekend, the following remark, paraphrased, bounced back and forth constantly between attendees: “This is just like actually being in college, only without classes or bullshit hang-ups or huge tuition bills.” And in some ways, it was: one could book a room at a hotel or in a dorm, eat at the dining hall, socialize genuinely or on glazed autopilot, get wasted at one of many scheduled events, catch a drama production, wander aimlessly around town. The difference, or one of them, was that as an alum, you’re a tourist drifting through your memories of a place and trying to reconcile the past with the present. Everything’s the same; also, everything’s different.

There is something uniquely undergraduate about a bonfire party, drinking beer from a plastic cup, then having someone foist a small bottle of Jim Beam on you. That happened at this reunion—a raconteur former classmate/Elm columnist, who now resides in town, turned up unexpectedly—less than 50 feet from the very dorms where generous seniors I didn’t know got me drunk during my first month on campus in 1995. At a Literary House function the following day, an older alum cornered me for 20 minutes to hold forth on the complications surrounding a play he wants to produce in his hometown. A wizened veteran of campus jam bands surfaced as the stand-up bass player in an excellent alumni roots trio. “We’ll be the background music at the all-campus picnic,” he’d deadpanned to me in advance, except that ultimately the group’s spirited performance was the only reason for me to bother with the picnic at all; lunch was overpriced, everybody clustered around tables under a tent in an oppressive humidity lousy with rowdy horse flies.

It was frighteningly easy to resume the role of outsider or outlier; I’d never really relinquished it. In the past, that standoffishness manifested as a reportorial distance spun into student newspaper column inches; in the present, I’d retreat to Facebook until someone saw fit to snap me back into the moment. At some point, The Collegian—the campus features magazine, which I edited senior year and which remains the focal point of occasional nightmares—became a quarterly literary journal. There were myriad, surreal introductions to spouses and children. On Saturday night, my first editor and I watched one of her daughters idly toss stones in the rock garden outside the Casey Academic Center and then arrange them into a face on a brick wall. Over breakfast on Sunday morning, a fellow Kent House non-conformist and I reasoned that whereas the wide-open dining hall layout of yore reinforced a social Darwinism, the new expanded, segmented configuration encouraged cowardice and separation in equal measure. We also agreed that there’s a swampy, indoor dampness endemic to the Maryland Eastern Shore.

The college, meanwhile, seemed to be swallowing the surrounding town like a metastasizing cancer, for good and ill, even as stadiums and dorms have sprouted in campus badlands that fascinated me as an undergraduate. Yet the Chester River was blessedly unchanged: a sparkling gem brushed by breezes, busy with waterfowl. I challenge you to surrender 15-25 minutes to this river and not come away becalmed. Seriously, it’s cleansing.