Scenes from classrooms at the McDonogh School. 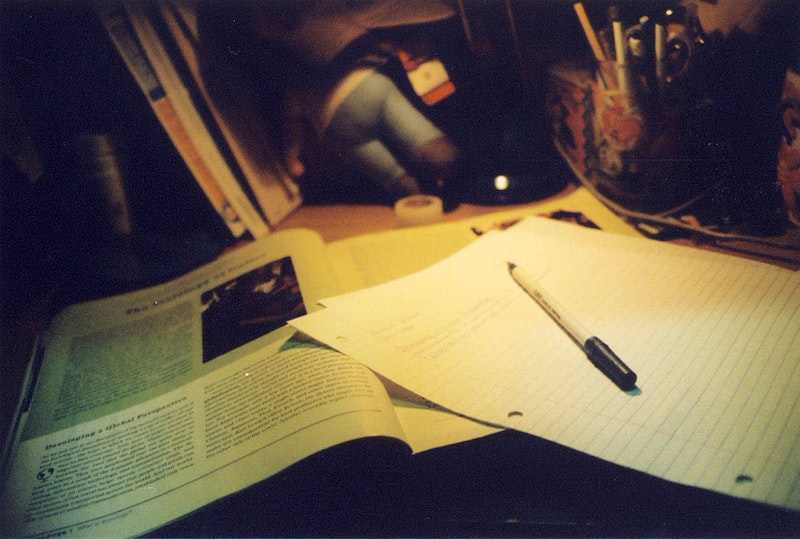 We have English class in a small office above the basketball courts on the far end of campus. Ms. Deegan is the athletic director. She says this class is a labor of love. “If I don’t teach at least one English section then I won’t have an excuse to read Great Expectations every year. And I love Great Expectations.”

My experience with Dickens has been entirely negative so far. We were assigned A Tale of Two Cities in eighth grade, but the material proved too difficult for our straight-out-of-college teacher Mrs. Lawrence. She stopped assigning the book mid-way through after we caught her reading Sparknotes. The school quickly relegated her to the fifth grade.

“Have any of you read Dickens before?” Ms. Deegan asks. I consider raising my hand but decide not to when I see that the rest of the class is as hesitant as I am.

“Good,” she says. “It’s more fun when you’re all rookies.” She is fond of sports metaphors. Our papers aren’t bad, they’re “JV.” We don’t make good points in discussions, we “hit home runs.”

She creates nicknames for all of us. I’m “Book,” Kristina Pineau is “KP,” Andrew Gillen is “Gills.” She can’t think of a nickname for Bill Hudson so she just calls him “27.” We don’t know why.

Our first paper is due at the end of September. I receive a B+. Ms. Deegan writes comments only in green pen, because she doesn’t want it to look like the paper is bleeding. They read: Good job, Book, good start. Nice points, but need to write more clearly, avoid passive voice. Work on organizing your thoughts better.

She holds individual meetings two weeks later. She compliments my spunk and proclivity to talk but wishes I would put more work into the homework assignments. “You would like Wodehouse, Book. Have you ever read him?” Of course I hadn’t. I only read comic books. I finish the year with a B+. I’m not too concerned with my grades.

“That’s a stupid question,” Mr. Levy says when I ask him who the greatest writer is. A year has passed and now I’m more interested in Pavement than schoolwork. “It’s Shakespeare, of course. We wouldn’t have any of the other great writers without Shakespeare!”

Mr. Levy waves away my question. “Talk to me after you’ve read The Odyssey. Now class,” he looks at us 12 sophomores sitting around the Harkness table. “Two things on the docket today: oratory topics and poems.” We’re unresponsive.

Mr. Levy holds up his arms and makes a face. “Of course they’re not good. You’re 16, they’re not supposed to be good. Oratory topics, first, though. Amanda, you go, what do you want to talk about? Remember, it’s a persuasive speech.”

“I plan on arguing that violent video games promote violent culture.” She looks pleased with herself. Mr. Levy rolls his eyes slightly. I think I’m the only one who notices. “Boring, but fine. You’re approved. Next, Payton.”

“Also boring, but okay. Approved.” He points at Oliver, a shaggy lacrosse player who looks more like Spicoli than a McDonogh gentleman. “You.” Oliver giggles. “Legalization of marijuana.”

“I expected nothing less. At least you’re passionate about it. Approved. Booker?”

Mr. Levy looks confused. “Are you making a statement, or…”

“No, that’s what I want to argue. And I’m gonna write it all in verse.”

“Different, but no. If you can find some scholarly articles on the subject… maybe. But otherwise, no. Choose something else.” Mr. Levy reacts to the rest of the topics with ambivalence. He says the word “boring” frequently. “Alright,” he says, “Now it’s time for some bad poetry. Who wants to read first?”

“We have to read them?” a kid says. They sound panicked. “Sure, that’s my favorite part, seeing your guys’ reactions. Now, who’s first?”

“Great. Bravery is a virtue, class. Pass it forward, Booker.” I hand it to Mr. Levy and he reads the title aloud. “The Dopest Poem Ever Written: A Work of Genius by Booker Smith. Quite the build up, but alright.” He continues in a monotone:

I’m Tom Cruisin’ through the ‘nilla sky
On my firebreather, flyin’ high
Tryna steer and not blink an eye
While starin’ hard at that yellow pie

Sharp turn started slidin’ my knapsack
So I snapped the latch, sadly it decided to snap back
BA-CRACK, turbulence got me up and down like a hacky sack
Wind kickin’ up, harder than sacking Matt Hasselbeck

Cheesy limo fatter than the average
Filled with overdue papers swiftly cracking my cabbage
Got so much work, don’t know how I’ll manage
Enough complaining, now back to my dragon

Mr. Levy stops after the third stanza. “What am I reading?”

“Booker, you’re smart, but you’re lazy,” Dr. Beth says after class. She’s one of the younger English teachers and easily my favorite. “Do you know what that makes you?” I pause. “Is the answer not smart and lazy…?”

“Wait, Doc, you just gave me an A on this paper,” I hold up my Turn of the Screw essay. “Why am I getting a lecture?”

“Because that was the exception. You clearly worked hard on it and the grade reflects that. The quality of the paper reflects that. But I’ve talked to your past teachers and they all say the same thing: ‘smart but lazy.’ So I’m telling you to stop. Stop being lazy. It’s too common.”

I consider telling her the truth. I wrote the Turn of the Screw essay while watching baseball the night before it was due. That it’s quality is just a coincidence, if it actually has any quality at all. That I haven’t even read the whole book, just the parts of it that weren’t covered on Sparknotes. I refrain. I’m sick of underachieving. I’m sick of B+’s.

“Good,” she says. She walks to her desk, picks up a small book and hands it to me. “Read this. I want your opinion on it.” It’s Hemingway’s The Sun Also Rises.

“No. But it’s greatest novel ever written. You need to read it.” I laugh. “Do you think you’re that teacher in Perks of Being a Wallflower?”

“Just read the damn book, Booker. It’s Monday, so…” She taps her chin. “Let’s talk about it on Friday. Have it read by Friday.”

“Okay,” is all I say. Dr. Beth continues to assign me books throughout the year. She gives me an A+ at the end of the trimester.

“‘Kurosawa’s the real master’ is what he’s gonna say,” I tell Zach.

“You’re not allowed to goad him into it, okay?”

“We ask about soccer, that’s it. He needs to bring up Kurosawa all by himself.”

I had told Zach that Mr. Cannelakis would bring Akira Kurosawa into any conversation, no matter the topic. He didn’t believe me so I suggested we test out my theory. “Yo, Mr. C!” I say as we walk into his classroom. “What’s good?” He’s the youngest teacher at McDonogh, but feels the most uncomfortable around slang. I think it’s funny.

“Oh, hi, Booker. Hi Zach.” He’s awkwardly reclining at the head of the Harkness table he built himself. Above him are three posters: one for St. John’s College, detailing all of the “Great Books”; one James Joyce portrait; and one for the Kurosawa film Ran. “Are you guys here to talk about your papers?” We both got A’s on our Dubliners essays.

“Yeah, that’s whatever,” I say. “We were actually hoping to chat about soccer.” Mr. Cannelakis is a soccer snob, among other things. “I’d prefer you call it football,” he says. “But yeah, totally, what do you want to know?”

“Well, y’know, we’re just trying to get into it. We don’t know where to start,” I say. Zach looks at me. He’s worried this will turn into an hour-long lecture. I shake my head slightly so as to say: trust me, this won’t take long.

“Okay, wow, quite a question. Okay, are you familiar with Eamon Dunphy? His book, Only a Game?” We shake our heads. Mr. Cannelakis nods. “Okay, yeah, definitely check that out. And, of course, just start watching football, y’know? You really need to just absorb it via osmosis.” He taps his chin. “But there are films that could… Yeah, that could definitely spark an interest… Have you ever seen… No, wait, you wouldn’t like that one… Have you ever seen, yeah! Have you ever seen The Damned United?”

We shake our heads. “Check it out, it’s good.” He tilts his head. “Well, it’s good, but it’s not good. It’s as good as a contemporary film can be, I should say. It’s certainly not Kubrick. Or Altman. And Kurosawa’s the real master, of course.” Zach laughs, incredulous. I stealthily pump my fist. Point Booker. “Now there’s a director. Have you guys seen Seven Samurai? Or Rashomon?”

“Yeah, you should. It’s good. But temper your expectations.” Zach continues to laugh as we leave. He doesn’t stop until we reach the parking lot.

“What poem did you memorize?” Zach asks.

“What poem are you doing?”

“Good afternoon, boys,” Mr. Van says as he walks in five minutes late. McDonogh went co-ed 30 years ago, but he’s stuck in the 1960s. Mr. Van is a strange hybrid of a classic prep school teacher and a burnt-out hippie; he’s a stoned, sour John Keating. An e-cigarette dangles from his lips. “We used to be able to smoke in these classrooms…” he says. “The world gets worse boys, just know that.”

He sits down at his desk and puts on a CSI: Miami baseball cap, allegedly signed by David Caruso. I can’t tell if he wears it ironically or not.

“All right, poems,” he says. “Channel Capote. He’s my favorite writer and he knew how to entertain. Entertain me! Who wants to go first?” A few kids raise their hands but Mr. Van bats them away. “No, you guys are no good. I want something good.”

“No, you have a stuttering problem,” Mr. Van says. “Booker, you go, show the class what you’ve prepared.” Great, I think. I had just Googled “short poems” but even those won’t help me now. Zach’s laughing. Good thing I know Illmatic by heart. I walk up to the podium and take a breath. “Halftime, by Nassir Jones.”

Before a blunt, I take out my fronts
Then I start to front, matter of fact, I be on a manhunt
You couldn't catch me in the streets without a ton of reefer
That's like Malcolm X, catchin’ the Jungle Fever
King poetic, too much flavor, I'm major
Atlanta ain't Brave-r, I'll pull a number like a pager
Cause I'm am ace when I face the bass
40-side is the place that is giving me grace
Now wait, another dose and you might be dead
And I'm a Nike head, I wear chains that excite the feds
And ain't a damn thing gonna change
I'm a performer strange, so the mic warmer was born to gain
Nas, why did you do it?
You know you got the mad fat fluid when you rhyme, it's halftime

I give the speech at graduation. I look into the crowd and see my English teachers, the people who have edited me into my current form. I see Dickens, Shakespeare, Hemingway, Kurosawa, and Capote. I see my freshman year ambivalence and my senior year excitement. I beam at them and they beam back.