College Leans on Brown Girl for Railing at White Folk 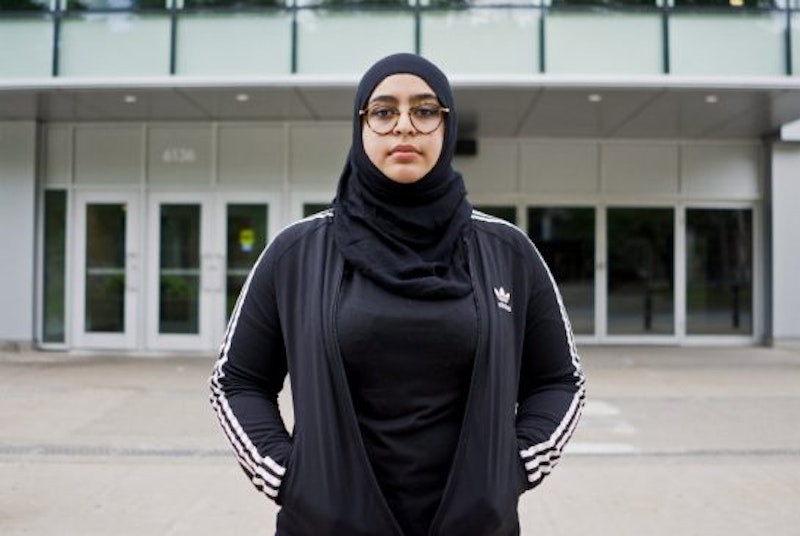 The words “white fragility can kiss my ass” have landed a non-white college student in trouble. Nova Scotia’s Dalhousie University means to discipline the girl for a Facebook post that caused a grad student, presumably white, to lodge a complaint. The university won’t comment until the process is done, but the girl’s lawyer sums up the Dalhousie position this way: that her post “constituted personal harassment under their policy, and that she should have known that her post would have been demeaning to people who identify as white.” The girl, Masuma Khan, is a wheel in the student government, which has been known to censor comments that it deems “racist and triggering.” Well, now look.

How can the university discipline a student simply for stating an opinion? Apparently, “the school's code of conduct ensures students can raise concerns about actions they feel may disrupt their learning environment,” in the words of a CBC article on the flap. These actions, I suppose, can be anything. The code says the bad conduct has to be “directed at one or more specific persons,” but there’s no word that Khan’s Facebook post was directed at anyone in particular. Even so, the school decided it was “personal harassment,” as Khan’s lawyer puts it.

Having decided, the school began snuffling about Khan, trying to nose her into the correct frame of mind. “With complaints of this nature, we engage in efforts to resolve issues through informal, educational and conversational means,” says Dalhousie’s vice-provost of student affairs. First, the school gave the offender “the option to undergo counseling and write a reflective essay,” to quote the CBC article. This was not an offer that Khan appreciated at all. Like most of us, she has no interest in letting the authorities arrange her opinions for her. “It was really offensive, to be honest, for the university to tell me that they’re going to teach me how to talk about racism in a more collaborative way, when racism is very harsh,” she says.

Now the university is thinking about doing something or other, once it schedules a hearing. In the same spirit, the accused vows action, but isn’t clear as to what. “We’re going to do everything we can to let Dalhousie know that this is not okay and it’s not appropriate,” she says, sounding prim. Khan appears to be a barrel of PC clichés, and I expect she knows what to say if anybody cites her case as evidence of the harm done by hunting “racist and triggering” speech. She would say that people triggered by white bigotry—the only true racism—are victims still tender after centuries of insult and exploitation. Whereas white folk bothered by her views are feeling tender at no longer being center of the world and sole deciders of the good and true.

If that’s her answer, she should imagine the language that could get such a distinction into a set of university bylaws, and the group of white decision makers that would say yes to putting it there. The first seems barely possible, but the second defeats me. This is a society where the big weapons tend to be in the hands of white people. If any non-whites think a weapon against free speech will be used to make them feel better, they’re not as aware as they think.