Greek life is a breeding ground for depravity. 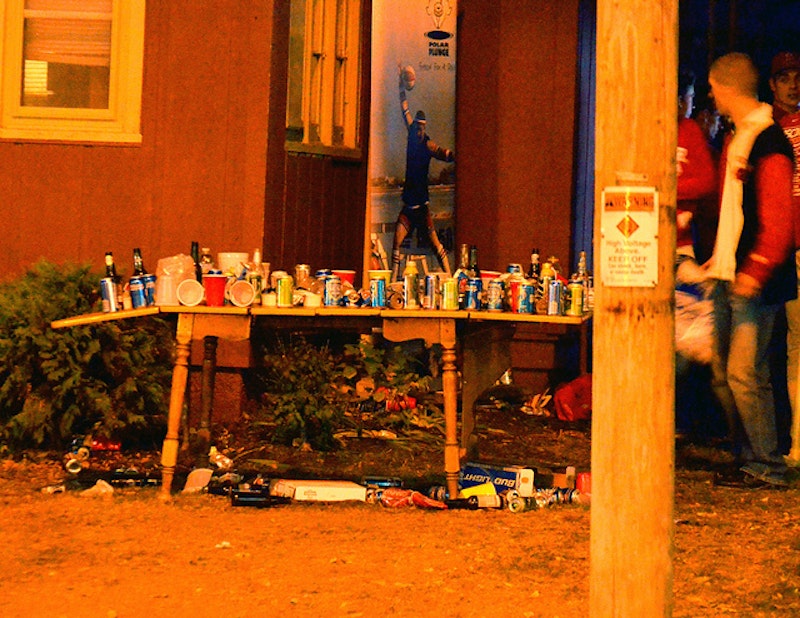 The Beta Theta Pi house at Penn State University is a collegiate house of horrors. On February 2, the frat brothers put their fellow brother, Timothy Piazza, through a boozy ritual known as  “the gauntlet,” after which he tumbled down the basement stairs and sustained grave injuries. His brothers, instead of immediately calling 911 like decent human beings, played doctor, Googling “head injuries” and throwing liquid on him. They rebuffed pleas to call an ambulance, choosing instead to wait 12 hours, by which time it was too late. The 19-year-old, who was spending his first evening as a fraternity pledge, died on February 4.

The authorities charged some fraternity members with involuntary manslaughter and aggravated assault, but the judge threw them out, while allowing some lesser charges involving hazing to stand. The FBI was subsequently able to restore a video that one brother is accused of deleting which showed the pledge drinking 18 alcoholic beverages in 82 minutes, none of which he obtained of his own volition. Last week, the district attorney charged 12 more frat members; five will go on trial for manslaughter.

It hasn't just been a couple of bad months in Greek life. Students have died of alcohol-related causes at frats and women have been sexually assaulted for decades. While it's nearly inconceivable that a student who can get into a college could graduate high school without knowing that forcing booze down someone's throat can kill them, it keeps happening. This is what the mob mentality does to people, even when a life could be at stake.

The only conclusion that can be reached is that fraternity members are not mature enough to curb their enduring appetite for hazing pledges. Given that alcohol can fatally poison the body at a level that will only be reached when something like “the gauntlet” is forced upon a vulnerable pledge, the next logical conclusion is that colleges and universities should immediately ban all fraternities. There are no other options.

Some might call that restrictive, or an overreaction, but the situation’s too serious to worry about curbing anyone's rights. Fraternities have no inherent right to exist on campuses. Having a fraternity on campus is a privilege that students have abused for too long. How many more have to die because certain privileged, arrogant young people find it amusing to mess with the health of those they have power over? If several students were to die playing a particular sport in one year, that sport would never be played again on a college campus.

Reverse the situation and ignore the victims of hazing. Examine the 18 Penn State students who are now facing 850 criminal charges that could ruin their lives. It’s unlikely that any of them would’ve found themselves in this situation if they hadn't been in an officially-sanctioned fraternity. These aren't budding criminals who’d have found another way to get into big trouble before they graduated. Penn State allowed it, knowing the risks involved, just as it once allowed football coach Joe Paterno to cover up Jerry Sandusky's rapes of young boys.

While universities are no longer expected to act in loco parentis to students, they still have an obligation to take reasonable measures to protect them from death and sexual assault. Hazing is a violation of human rights when it's carried too far, as it often is, and schools with frats are powerless to stop it.

Fraternities allow the worst of what's inside certain people to manifest itself. No halfway measures like “reforming” them are workable. Beta Theta Pi house at Penn State had video surveillance, a resident adult charged with supervision, and a no-alcohol policy, yet its members put a kid’s life in jeopardy and then let him die because they were concerned with their own welfare. That's as depraved as it is difficult to fathom, and it's not conceivable they’d do this under any other circumstances. No libertarian arguments hold any water when students are acting this deranged, unless you're just in favor of letting the law of the jungle prevail. Ban fraternities now, and get rid of sororities too. It's not a hard call.