The city’s school system fails everyone. 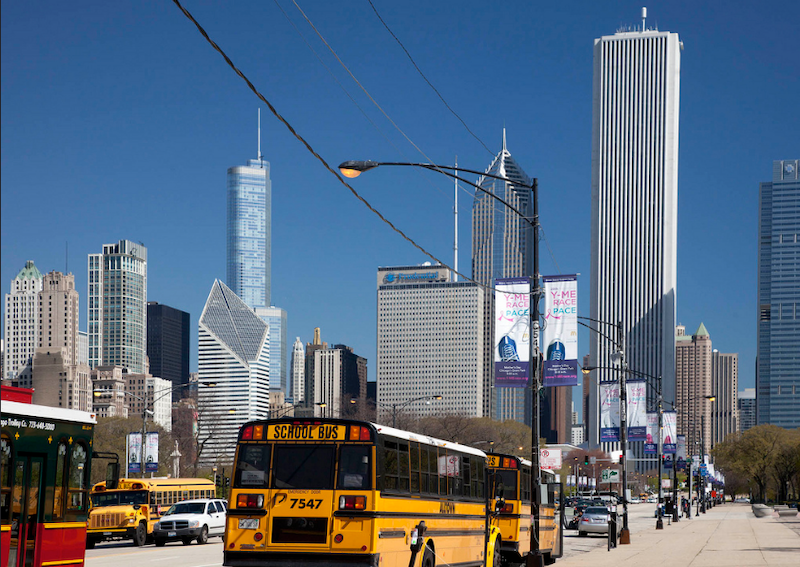 My son’s finally completed his application process for high school in Chicago. The gauntlet began last year, when he took a test prep course. He then went through not one, but two rounds of exams for selective enrollment schools. We went to several open houses to try to figure out which schools to put as first choice. Then there were the auditions. My son’s interested in acting, so he applied to a couple of schools with acting programs. All together, with callbacks, he performed a short monologue from A Midsummer's Night's Dream five times. With travel, wait times, class hours, and testing and research, the process took countless hours.

And the truth is, I lied. The high school application process didn't begin last year. It began the year before, when we moved from the south side to the north side. We needed a new house so that my mother-in-law could move in with us—but where we moved was also influenced in part by the arts school my son was hoping to attend. We won't know if he got in until March.

If that sounds complicated, expensive and ridiculous, it's only because it is. Chicago’s touted as a leader in school choice; it was an inspiration for Obama's national school reform movement. But from ground level, Chicago's school system doesn't look innovative or exciting. It looks like a Byzantine mess, designed to induce anxiety in parents and students alike. "Choice" in Chicago isn't exhilarating; it's miserable.

Chicago's school system is bad enough for middle-class families, who have the time and resources to navigate batteries of tests and auditions and four or five different kinds of applications for four or five different programs. But for everybody else, it's even worse. The Chicago school system is a financial disaster, in part because of Gov. Bruce Rauner's refusal to sign a budget for most of his term, in part because of long-term funding failures, and in part because the "school choice" movement has bled money and students from neighborhood schools to charters.

School choice is sold as a plan to benefit everyone; good schools will thrive and draw the best students, while bad schools will dwindle and be shut down. It's a consumer model—and it fails because choosing a school isn't like choosing a car or brand of toothpaste. All kids need to go to school. And where a student can go is affected by where they live. Getting from one end of Chicago to the other can take hours, depending on traffic and how close you are to public transit. It takes resources—a car, money for fares, time to negotiate routes, ability to move—to take advantage of "choice."

The truth is that school choice in Chicago is an extremely complicated, burdensome, and unpleasant means to avoid providing good schools to everyone. The straightforward way for improvement is to put substantially more money into schools, and especially teacher salaries. But affluent people are unwilling to spend money on less well-off children and schools—and so they create a painful gauntlet for their own kids to hurdle. Better that my kid has to take rounds of pointless tests and travel an hour to get to school every day than that your kid's school gets adequate funding.

Politicians love the charter school movement because it offers numerous opportunities for corruption. Public neighborhood schools don't have money to dole out, but charter school operators contribute to Mayor Rahm Emanuel. Moreover, the wealthy love charters because they’re generally not unionized. The rich salivate at the thought of crushing teacher labor power.

When you're in the system, you have little choice but to go with the system, and try to get your child into a school where you think they'll thrive. But Chicago would be better off if it would give up on the "school choice" boondoggle, and just commit itself to paying what it takes to make sure all its neighborhood schools provide a good education for everyone. Equality would be better for all—except for politicians and the rich. But politicians and the rich hold the whip hand, and so we're all out here making our children anxiously jump through stupid hoops just so some other children somewhere else can be locked out of their schools.