Kaepernick costume has indignant students out for blood. 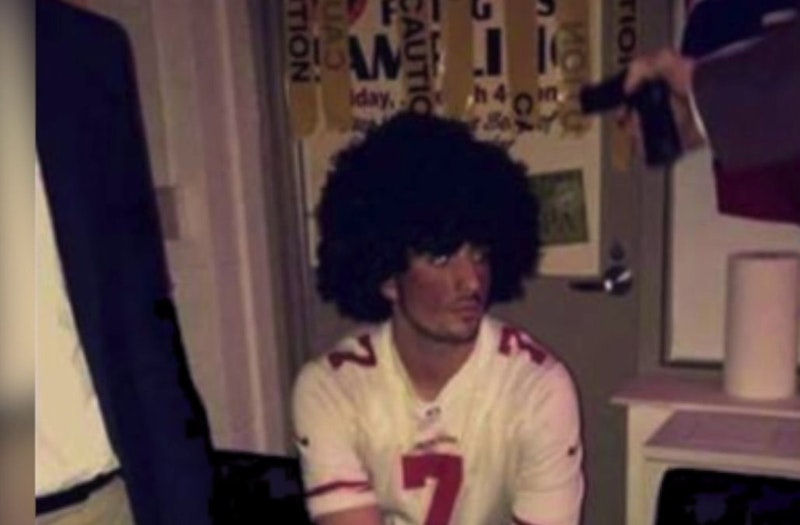 Former NFL quarterback Colin Kaepernick started something last season with his “take a knee” protests that refuses to die even though he’s not currently playing. The ex-49er has become a cultural touchstone on the left—if you think he should be on a team roster, you're on the right side of history, as the Democrats like to say, but if you see him as an unpatriotic bum, you're a Trump voter who's probably racist.

Now that it's happened, it was always inevitable that a college kid would dress up as Kap for Halloween and then some sort of modern day version of the Salem witch hunt would occur. All it would take to trigger the thought police would be to don his number-seven jersey and an afro-style wig, which is exactly what happened this Halloween at Dickinson College in Carlisle, Pennsylvania, where things quickly escalated to a fever pitch when the photo made its way onto social media. Amping up the frenzy level even more was the fact that this photo also included another partier pointing a gun (or replica of one) at the fake Kaepernick's head.

Joyce Bylander, Dean of Student Life at Dickinson, announced on Facebook that the photo was “deeply offensive and reflected the exercise of very poor judgment,” but added that it falls under the category of free expression. She wrote that Dickinson would work with those involved to “educate them on the impact of their behavior.” The comments in response to Bylander’s post were heavily negative. One commenter interpreted the photo as a literal death threat to all people of color. An alum said that his alma mater “cares more about white money than black lives.” Others said that the photo had created a hostile environment on campus.

The school newspaper, The Dickinsonian, has reported that the two students in the photo are members of the lacrosse team. At a special meeting, another team member, who is black, apologized for not intervening, but this just further enraged some students, including one who said, “I’m mad as fuck. What just really ticked me off is that to reinforce the statement that you’re ‘not racist,’ you get a black men to stand up… that’s more racist than I’ve ever seen.”

It’s indicative of the hypersensitive mood on college campuses that a student finds the apology for a “racist” act even more racist than the original act. Nobody's safe from recriminations. The question remains as to whether or not the costume alone is offensive, because there's not enough context to claim that the pointed gun had any evil intent behind it. Perhaps it was just the sort of impromptu horseplay you'll find at a college party. Someone happened to take a snapshot, and it took on an unintended life of its own. People at a party are not self-policing on the off-chance that their actions end up on social media, nor should they have to, but this incident shows what can happen if you let your guard down for just a moment. People will judge you mercilessly; that's called mob mentality.

People don't get the benefit of the doubt in these cases, as a student guest writer for the Dickinson school newspaper demonstrated in an article she wrote advocating that the Kaepernick imitator be expelled, the harshest penalty the school could impose. She writes that the lacrosse player used “blackface,” but the article contains an editor’s note stating that there’s no way of determining this. The student in question denies altering his skin color. Incredibly, the writer then claims that an expulsion would maintain the school’s mission, which is to be a “bulwark of liberty,” and then there's this sentence: “His costume was premeditated and reflects his personal belief that Americans who are black are not entitled to their constitutional rights of free speech and peaceful protest.”

This person obviously, as another editor’s note explains, has no way of knowing anything about the student’s personal beliefs on the constitutional rights of black people, nor does she think that trying to find out is even called for. One has to question the newspaper’s view of journalistic ethics if it thinks that running an article at this particular time that requires two editor’s notes is appropriate. The mob won't see those parenthetical notes.

Someone who’s on the Dickinson campus daily informed me that the accused student was afraid to go out of his room, and that friends were taking meals to him. It's reminiscent of the Evergreen State situation in May, where biology professor Bret Weinstein was physically threatened for coming to campus on a day when white people were not supposed to be there. There were reports that students were going from car to car looking for him. We're approaching the point where some cosseted students are so out of touch with reality that they don't think they'll be held criminally accountable if they commit serious acts of violence against those who violate their own special code of behavior.

The students who the lacrosse player fears are concerned about all of the serious injustices they see in this country, yet they choose to let a Halloween costume give them fits. It doesn't matter to them what the kid’s done in the past, or that he's apologized, or what kind of person he is, because one photograph has told them all they need to know. It's the job of educators to explain the errors of this sort of thinking, not to appease them, but college administrators fear becoming a target of student mobs so they give in.