Why They Suck: Bruce Springsteen

America doesn’t need any more of his mythology. 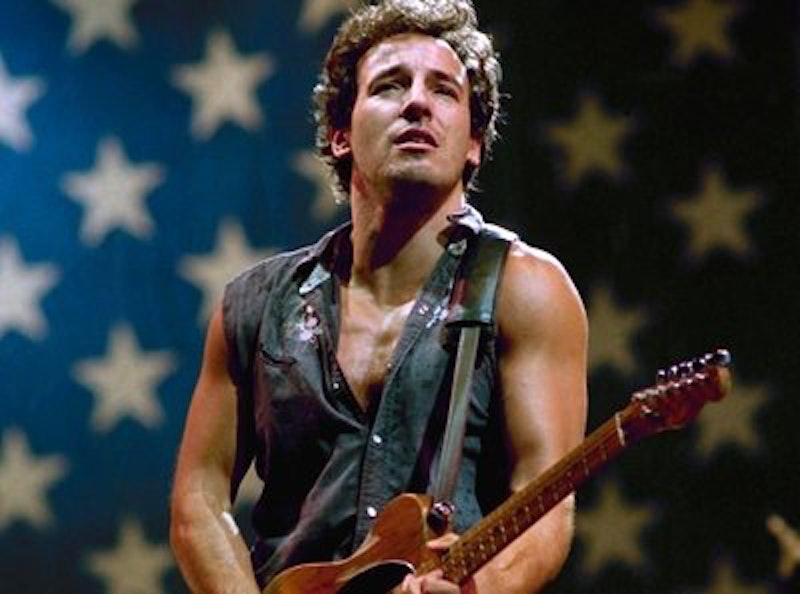 When you have chronic headaches over a period of years, you'll find that they eventually collapse into a single throbbing or hammering beat, that they lock in the long run into an incorrigible melodic framework. Mine, since 1984, has been Bruce Springsteen's Born in the USA: square, mechanical, incessant, bludgeoning, yet inexplicably hysterical. Fist-pumping, anthemic, head-pounding music. Music that, like America itself, really hurts.

Never confuse how overwrought someone sounds with how much emotion they're actually expressing. Just because Barbra Streisand has worked herself into a tizzy again doesn't mean that she actually has any emotional engagement. I just wish Springsteen would quit his bellowing, work up to it slowly, or, like, earn it. As you will have inferred, a lot of this goes double for Bono.

When Springsteen showed up in the 1970s, I think his stage act was based on Van Morrison's: a white-boy soul sound with a lot of the big ambitions of "classic" rock, as theatrical in its own way as Black Sabbath or Queen. Springsteen appropriated a vocabulary of stereotypical Americanism and masculinity: he looked kind of like a sensitive Brando or a macho James Dean, and it's been jeans, white t, and leather jacket ever since.

He told tales of the hard streets, perhaps of an imagined Philadelphia, with over-the-top operatic emotionality: "Hey Spanish Johnny, you wanna make a little easy money tonight?" I don't believe the stories, the characters, or the songs. The whole thing constitutes an awfully West Side Story-ish kind of Broadway take on "the streets," if you ask me. As Springsteen-boys like John Cougar and Eddie Money and Bob Seger swarmed, one might’ve started to ask how much more mythology America really needed or could possibly withstand.  It got to where listening to the radio was like getting trampled by a herd of Henry Winklers.

Well, anyway, if America needs more mythology, it needs better mythology than that: each drag race another Jungian psycho-drama, each protagonist an ersatz Holden Caulfield or Jack Kerouac, many of the melodies and the personae definitely inert.

If you want to hear the entire early métier top to bottom, but so much better, listen to Van Morrison doing "Wild Night" from 1971, two years before Springsteen started to gain a following. But Van, not to speak of the great soul acts of the era—Al Green, say—did something similar with so much more lilt, subtlety, variety, melody, artistry and authenticity.

Never had rock critics been so unanimously ecstatic as when they welcomed Springsteen. In fact, The Wild, the Innocent, and the E Street Shuffle was the occasion of the first great enforced consensus in the history of rock criticism, when Lester Bangs, Dave Marsh and Greil Marcus and whomever still ruled the roost: the golden era of rock writing. (Man you don't want to read Lester now, though.) Rolling Stone actually imposed the dictum that Springsteen was the greatest, and would brook no contradiction.

Alright, it's true, I sort of got dropped as a critic by the Rolling Stone-published Record magazine when I slammed Born in the USA, which is another reason that it’s the very logo of my misery. But already in '84, no rational person could be permitted to disagree. And now Springsteen has been for decades an unquestionable dogma for every white person in America, a generational touchstone, someone who expresses the very essence of us. That is another devastating indictment of America's most aesthetically depraved demographic.

It's a bad sign when it is, as it were, illegal to disagree. If you hear criticism of Springsteen as demented, or if you've never heard it before at all, you’re part of the problem. At any rate, stupefied by a reputation as grandiose and apparently unanimous as Springsteen’s, people hear the music wrong, or hardly hear it at all. And one thing we've really got to let go of: the quest for a man who mystically embodies the mystical essence of America. That just gives me a headache.

And now, let us run through the entire Bruce Springsteen oeuvre, album by album, tour by tour, eviscerating here, skewering there, disemboweling where necessary, while now and then conceding with characteristic generosity that this or that bit could have been so much worse.