The Atlanta rapper's new mixtape is hardly rap at all. 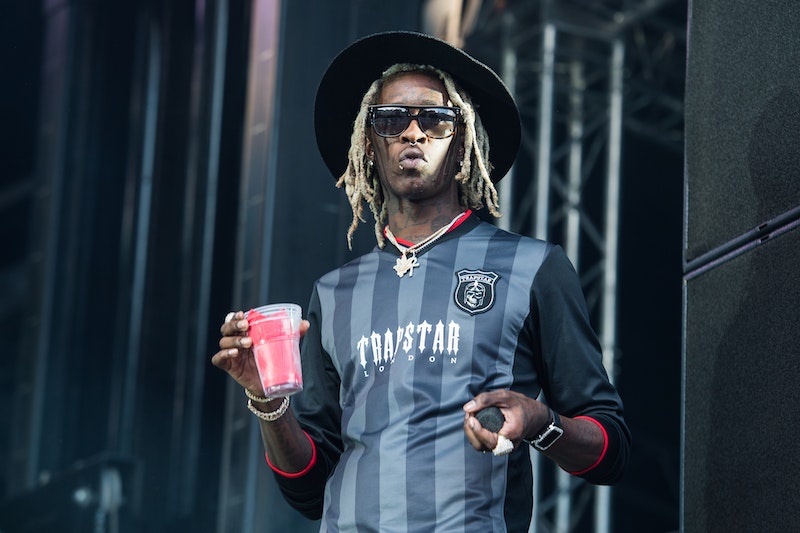 For an artist as prolific as Young Thug—he's released six album-length mixtapes since 2015—his output has been surprisingly consistent. It's hard to find a dud even on the 86-minute Slime Season 2. And yet, among these collections of really good songs, there's always one that stands out: on Barter VI, it's the relatively minimalistic "Constantly Hating"; on Slime Season, it's the creepy, haunting "Freaky"; on SS2, the gushy love song "Hey, I" leaks infatuation, despite its non-sequiturs and questionable vows ("a purse/every time lil momma catches me cheating"); the soulful, slow-burning "King TROUP" has stuck with me since I'm Up's February release; and then there's the absolutely bonkers "Drippin'" from Slime Season 3, a Song of the Year contender where Thug dissolves into an inscrutable, out-of-body mess of squawks and yelps.

And there's a clear highlight on his latest—and possibly best—release, Jeffery: the chest-puffing, practically hardcore "Harambe."

Harambe. I groaned when I first read the tracklist, and again when Thug said he named every song after one of his idols. How could the most forward-thinking rapper, aside from Kanye West, still think Harambe jokes are funny? Why is Thug riding a dead meme?

Listen to the song, though, and you'll realize it doesn't matter. Jeffery's tracklist betrays little about the contents of its songs; Cincinnati's beloved gorilla isn't mentioned once on "Harambe." In all likelihood, Thug couldn't come up with a better title, and he thought "Harambe" would at least generate some press. Simple as that. Except, after giving the song a couple more listens, I started to think that the title fit. Thug raps the most menacing lines—"I'll pull up and bust your mama/I'll pull up and bust your brother/I'll aim at your fuckin' family"—in the lowest vocal register he's displayed on record yet. Lyrically, too, Thug beats his chest like a gorilla, daring his contemporaries to challenge him.

I use that word—"contemporaries"—consciously; Thug has no peers. He's not necessarily better than everyone else—although he is better than most rappers—he's just working on a completely different plane. Lil Wayne set the tone for his early mixtapes, but now the only precedent for Young Thug is Young Thug himself (which makes sense, considering he only listens to his own music).

Further, like Kanye, he understands that change—or growth, really—is essential to artistic vitality. Thug is dedicated to advancing hip-hop, both musically and culturally. Hip-hop values constancy: listen to any given rap song of the last 15 years, and you'll hear someone brag about how money hasn't changed their personality or approach to music. Like Drake on "Headlines," Thug dismisses the people who want more of his old material as visionless nostalgists, and declares, in a frustrated burst, "Fuck it, I'm changin' up on 'em!" He's not pandering to his fans; he's leading them to new places, and trusting they'll follow.

And then there's the album cover: Thug looks like Little Bo Peep wearing a parasol for a hat. This is Prince/Bowie-level costume direction that forces hip-hop to confront its notoriously homophobic history. Why else would older listeners hate him so much? He's changing the rules of hip-hop, throwing away antiquated notions about lyricism and gender.

Thug mutates from one release to the next: sonically, there's a clear distinction between the street trap of his Slime Season series to the reggae-inflected sing-rap of Jeffery; lyrically, though, Jeffery is also an improvement. That's not to say his bars are Nas-level all of a sudden. No, what he says is still less important than how he says it. But, thankfully, he's dropped the obtuse metaphors of his 2015 mixtapes in favor of more concrete language that helps define the overarching project of Jeffery, which is to recast Thug as a artist closer to Michael Jackson than Boosie.

And he succeeds. The line between rapping and singing is blurrier than ever on Jeffery: "Webbie" is essentially a reggae crooner; the genre-hybrid of "Wyclef Jean," meanwhile, is more seamless than anything on Drake's VIEWS; on "Kanye West," it's hard to tell where the beat ends and where Thug's voice begins.

Fans have complained about the perpetual gestation of Thug's debut album Hy!£UN35, but Jeffery is a monumental release, one that shouldn't be glossed over. Whereas someone like Future is content to explore variations on the same theme ad nauseam, Thug knows adaptation is necessary for survival. He also knows that Future has run out of gas. Although the two former-rivals have reconciled, it's hard not to hear "Future Swag" as a comment on the derivativeness of Future's recent output. Listen to "Future Swag" and the Beast Mode cut "Lay Up" back-to-back, and you'll hear it: Thug's brand of imitation isn't flattery, it's a taunt.

And really, that's what all of Jeffery is: a melodious taunt. I hope the rest of hip-hop is up to the challenge.