The Long Beach rapper's new album is a rumination on the futility of fame. 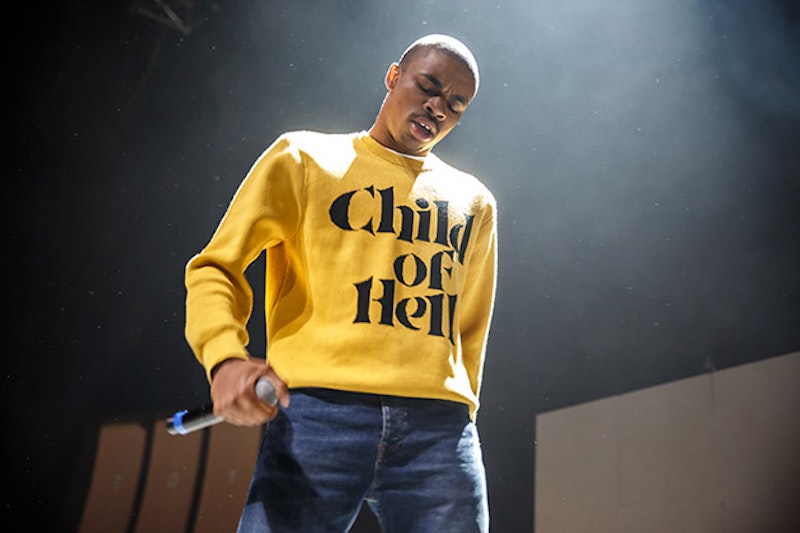 Thing is, even if Kanye's ego hadn't corrupted the themes of the video—the fact that he and Kim Kardashian are the only people in flattering poses is both obvious and hilarious; the exploitative baiting of Swift is cruel, not artful; and seriously, in what world, besides the self-contained one of Calabasas, is Ray J still relevant?—even if Kanye had removed all of his personal biases from the making of "Famous," it would still be too on-the-nose. The prosthetics are stunning, and the song is great, but conceptually, the video is on an art-school-freshman level.

I love The Life of Pablo—it's my favorite album of the year so far—but it's not a comment on fame, at least not an effective one. Maybe, after living as a Kardashian for the last three years, Kanye's lost perspective; maybe he was never a deft social commenter to begin with (although Late Registration-era stans would disagree). Kanye was destined to be famous—can you imagine an alternate universe where he's not a household name—and that gives him a skewed view on fame.

Vince Staples, however, is the opposite. He didn't buy The College Dropout the day it was released, like Chance the Rapper; he didn't worship at the altar of Lil Wayne, like Young Thug. No, he says he started rapping as a teenager to stay out of trouble, and essentially fell into a record deal. He's just a regular guy—an unusually smart, articulate one, with an acerbic wit—but a regular guy nonetheless. Perspective is the source of his appeal.

That's what makes Prima Donna, his new EP, so appealing: while he's gained fame and money in the 14 months since his debut album was released, his perspective hasn't changed; he's not jaded. If anything, he's more in tune than ever. He's taking stock of his surroundings—his "million dollar home"; his "black Benz"—and realizing that he's still unhappy.

That's where the epiphany, articulated across these six tracks, comes from: his strong belief that fame doesn't really change anything. Sure, he's more comfortable now—"I been broke, I ain't goin' back," he raps on the title track—but, because he's acquired that comfort, he also recognizes a hole in himself that money can't fill: "I made enough [money] to know I'll never make enough for my soul," he croons on "Smile."

The EP's most important lyrics come on that same song: "I left the street where I've grown/To chase the yellow brick road/I heard they paved it with gold./I turned around and seen they pissed on it."

The frequent suicide references—"Buy a million dollar home and blow my dome to paint the kitchen" might be the darkest line in an already dark catalogue of lyrics—could make you think of Staples as hip-hop's Kurt Cobain figure (that's Earl Sweatshirt). No, Staples isn't freaked out by fame, he's disappointed by it. Unlike Kanye—who's "Famous" video declares, "Celebrities are humans, too!"—Staples takes a far more cynical approach that says, "Celebrities are helpless, too." This sense of helplessness permeates Prima Donna, and it's one of the main reasons that suicide is a central motif: it's an easy escape, and the only action that Staples has total control over.

Whereas Kanye has grown more egotistical as his fame has increased, Staples has only become more clear-eyed. "Heaven, Hell, free or jail, same shit/County jail bus, slave ship, same shit," he raps, deadpan, on "War Ready." Later, in the second verse, he asks, "Who's the activist and who's the Devil's Advocate?" calling out the faux-woke white people who share the right articles on Facebook but passively fuel the racist system by contributing nothing but outrage over inequality.

Prima Donna may sound like a depressing EP, but it's not just depressing. The production, handled by James Blake, DJ Dahi, and No I.D., is definitively post-Yeezus, jittery and fresh. The imagery is specific and evocative—a favorite: "Hammers busting like a soda in the freezer"—way beyond that of his contemporaries. But, most importantly, Prima Donna is an honest look at the futility of fame, a theme that runs antithetical to most hip-hop success stories. This unique perspective is what makes Staples one of the most vital rappers of 2016.