Metal for the Weak 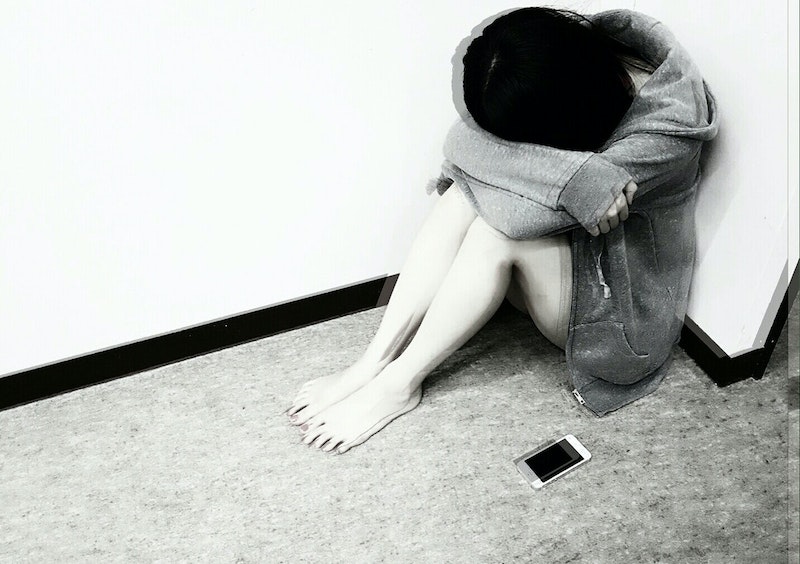 "Metal" for most people means aggressive swaggering violent devil worship. Hairy, sweaty men roaring like monsters about Satan and destruction while other hairy, sweaty men throw themselves around in a mosh pit fracturing beards and staining eardrums. Metal: it's for extroverts.

But, as they say, #notallmetal. In addition to outward-looking-break-something metal, there’s also inward-turned, miserable, wallow-in-suffering metal. A fine example is the EP Guilt Had Ambushed Me Once Again, by a South Carolina band called My Purest Heart For You.

"This was inspired by the thoughts and feelings that come with having terrible anxiety," the bandcamp page says, and that's a pretty good description of the music. Guilt Had Ambushed Me Once Again is atmospheric black metal, which means that it's 25 minutes of lyrical minor-key drone punctuated by demonic shrieking. Nervous, endless drumming provides a neurotic counterpoint rather than rhythm. Guilt Had Ambushed Me Once Again is like Sigur Ros, if Sigur Ros decided not to do a soundtrack to play over sitting in a corner for weeks staring at a bug crawl up a wall.

Not coincidentally, the cover image for Guilt Had Ambushed Me Once Again is a drawing of a woman huddled over in corner, face obscured, body wrapped in on itself. There's also a photograph of someone—presumably the artist—seated in a similar pose, face hidden.

There's no information provided about who the artist is, and from the image it could be a man or a woman. The ambiguity is perhaps intentional. Metal's aggression is usually coded male, but depression, self-doubt, weakness, and victimhood are all, in our culture, seen as female. Black metal also, often—and especially here—teeters on the edge of Goth, a genre more associated with female fans. The vocals on the album don't help clear things up; the distant screaming could come from someone of any gender. Even the band's name is studiously unrevealing; "My Purest Heart For You" suggests a gift of authentic inner self. But it's a reference to the Evangelion anime. In this case, "my purest heart" was borrowed from somebody else.

For old school black metal bands like Burzum or Darkthrone, the wearing of corpse paint and the erasure of identity was a way to turn themselves into demons/vengeful nature spirits/evil things in your dreams. Black metal's furious buzzing anger was meant to subsume individual personality into an older, uglier, overwhelming pagan maelstrom—a vision explicitly tied to fascism and white supremacy, in many cases.

My Purest Heart For You doesn't sound so different from marauding, borderline anti-Semitic bands like Drudkh. But MPHFY is clearly coming from a very different place. Song titles like, "Guilt Had Ambushed Me Once Again" or "Being Is Desire/Desire is Suffering," suggest not a unified volk, but a divided self, in which one's own emotions become a nightmare enemy. My Purest Heart For You isn't the bleak, brutal thing haunting the night, but the haunted. Inside a skull, the screeching voices and the skittering drums close in, until there's no person left to be anxious, only the anxiety itself trembling and gnashing.

Horror films are built around the ease with which audiences can switch position from killer to killed and back again; you're the slasher slicing up the teens, the teens running, and then the final girl slicing up the slasher. Crippling fear and violent rage alternate seamlessly, picking up different bodies in succession to work their will. Similarly, My Purest Heart For You takes an idiom of strength and turns it into an expression of paralysis and disintegration. To be swallowed by a greater power can be an experience of empowerment. But it can also simply mean that you've been eaten.