Who Didn't Want To Be a Rock & Roll Star?

My son inherited the talent I never had. 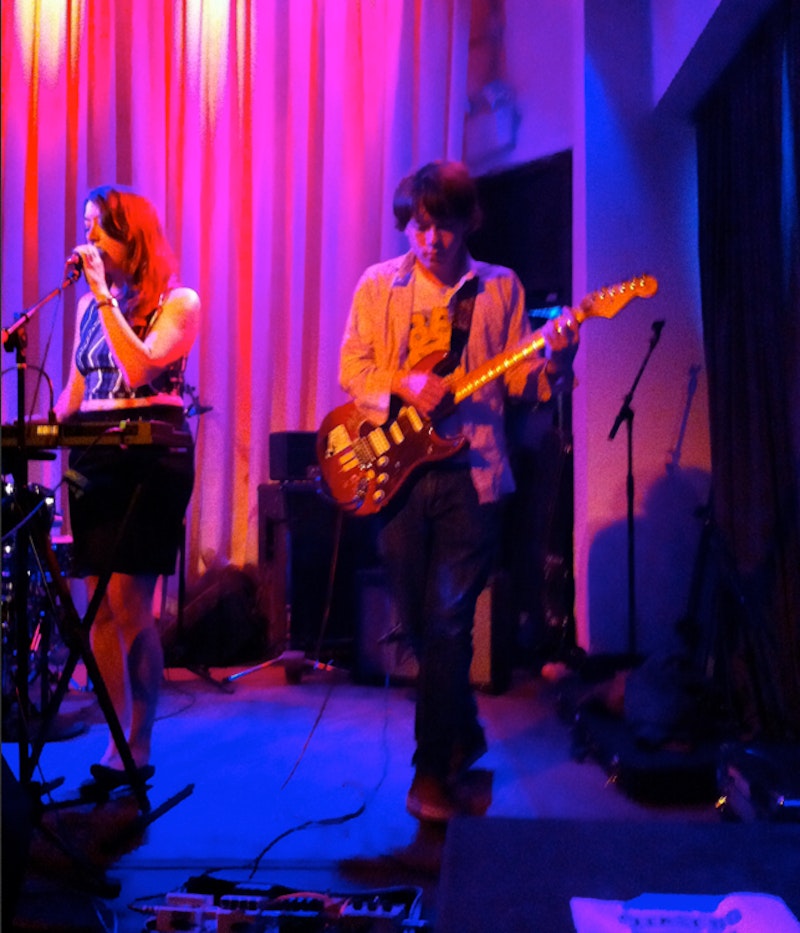 Last Saturday night I was near the stage at Baltimore’s Metro Gallery, watching Raindeer play, keeping focus on my 20-year-old son Nicky (pictured above), who’s the lead guitarist for the band. Not surprisingly, I was a very pleased pop, seeing (bias admitted) my talented boy sway and pluck away; he also tours as a solo act, set to tour the Midwest this summer. Truth be told, in between songs, I had my iPhone fixed to the Red Sox/Twins game, removing my spectacles to decipher the balls & strikes, but by and large, my attention was rapt.

In general, I’m not guilty of living vicariously through my two sons—a twist of human nature that can be either minimally narcissistic or downright pathetic—but when it comes to rock & roll, well, that’s a different story. I’ve no idea how Nicky came by his talent—my wife and I both love music, but got left hanging when that particular aptitude was doled out—and it’s not like he was the beneficiary of helicopter parents, enrolled in musical enrichment programs before he walked. And who knows how far his career will take him, since it’s such a dicey business—a combo of skill and luck—but it’s pretty cool just to see him on stage.

As a kid, I was an awful music student—as were my brothers, even though our father supplemented his income at the University of New Hampshire in the 1930s by playing saxophone and clarinet in various big bands—but in school it was a requirement that everyone give it a whirl. (At least it was better than wood and metal shop, where I was all thumbs, relying on befriended greasers to help me out, in exchange for some history tutoring.) I got my brother Gary’s hand-me-down cornet, a really nerdy instrument in 1967 when the whole world was about electric guitars and charismatic singers. At least there wasn’t a tuba hanging around the house. The lessons at school weren’t for naught, I guess, since I was able to play “Taps” and “Reveille” on a bugle at Boy Scout camp, but even that daily ceremony was pretty wobbly, which was noted with great mirth by my tent mates. My neighbor Tony Donnino, whose parents were a touch—a touch—more affluent than the others on our cul-de-sac of LaRue Dr., had an electric guitar (and color TV!) and sometimes I’d strum it, playing to an imaginary crowd out in the woods, singing a Flying Burrito Brothers song.

One late summer day in 1970, I was hanging out with my buddies Mike, Scott and Andy, drinking Boone’s Farm Apple wine, passing a hash pipe, outside with Neil Young’s newly-released After the Gold Rush playing, and I proposed that we start a jug band. The idea was met with intense—a ubiquitous word of that era, the “awesome” of its time—excitement and the four of us planned set lists, which would include covers of relatively obscure British Invasion and soul tunes, along with originals penned by yours truly. Man, it was great! After a half hour we’d already, in our minds, conquered the audience at Huntington High School and were on our way to local stardom, and then, inevitably, the Fillmore East! What a bunch of goofballs. As it turned out, just a year later Mike became quite proficient at bottleneck guitar and put on several terrific outdoor shows at Heckscher Park, aside his mentor Tom Pomposello, but the reality was that our whole scenario was just a tippler’s pipedream, probably happening simultaneously at thousands of gatherings of hippie friends across the country on that very same summer day. What the hell, it was fun to be 15.

This sunburst of, excuse me, letting our freak flags fly, came to abrupt end around six o’clock when Andy—who’d done the unimaginable by chugging tall boys of Bud along with the wine—barfed inside Mike’s house, really fouling up the living room. Suddenly, with Mike’s parents due home from work, and our buzz decimated, we had to get out the mop and towels and take a powder. And so ended my career as a rock & roll star, with none of the money, fame and public acclaim that the Byrds cynically sung about a few years earlier.