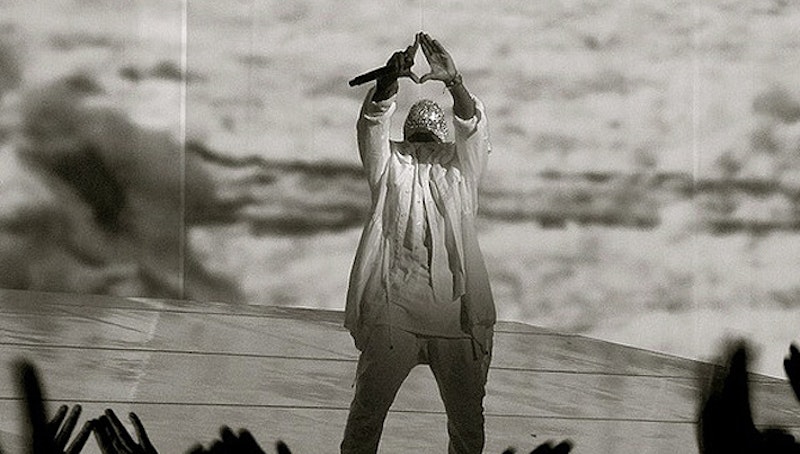 We're still hovering in that 72-hour-or-so window of bombed half-coherence where the reality of yet another actual Kanye West paradigm seems exciting, new, potentially profound, where we—at least some of us—want to believe. What's there to hear is stark, polarizing and distorted, the visual imagery enormous and dark beyond what preceded it. There's been Paris talk, Kim talk, Kim's baby talk, unconfirmed collaborators, a hater-bating album title (Yeezus) that screams either "self-fulfilling prophecy" or "Icarus." Sonic Youth's Kim Gordon, J. Mascis, Michael Penn, and West stood on the same stage at the end of Saturday Night Live, which is weird to think about. All of this is raw and novel and may portend absolutely nothing of note, which means that it's probably the right time to try to dissect it.

In two vocoder-gargled Wizard of Oz minutes spent trapped inside a giant glowing pink triangle, West effectively re-humanized himself by delivering what equated to a stream of artless Tweets as a 808s & Heartbreak-esque forget-me-not, albeit less that album's attendant pathos and self-loathing. I love how spare, how silly, how blissed out "Awesome" is, how the thesis is impenetrable and relatable on a scale broader than much of anything on My Beautiful Dark Twisted Fantasy. Think about it, men: what is huger and more amazing than someone else willingly carrying your child and putting up with all of the baggage you inevitably bring along and waking up everyday and loving you (mostly) unconditionally? Even God isn't that awesome, comparatively speaking, is he? Even though your girlfriend or wife of baby's mama probably doesn't have a manager. Does she?

There's an Emmitt Till nod at the top, much different than the one West made on "Through the Wire." Then "Black Skinhead" goes electro-manic in a way that's best described as, well, cocaine-injected with a pop chaser, though forgive me if I can't peg what's being sampled/drawn into the afterburners of this shit fit. Kind of a David Bowie move. Remember the run-up to My Beautiful Dark Twisted Fantasy, how there was this epic run of sanctioned leaks of half-baked West tracks, usually with a black and white art photographs attached? Remember how desperate and evocative some of those photos felt? "Black Skinhead" might be the first song yet to match that wide-open sense of possibility and menace; it's the kind of banger that isn't really a single, it's too depraved and screamo for that, but it begs you to pay attention to it. I hope it promises something about Yeezus as a whole, is a key that will unlock something caustic and urgent. I may regret saying this, but I'm really, truly hoping that this album is where West puts the celebrity woe-is-me shit talk on ice for the first time since 2005 and actually deigns to say something meaningful over the space of 50 or 70 art-noise saturated minutes. After several listens, I don't know what for sure this song is trying to express, but I certainly respect its fury.

The measure of a song like this is the accompanying behavior of the artist performing it. How pure, finally, is "New Slaves"? How sincere? If you're going to condemn the superficiality of the haute couture sphere and its trappings so boldly and with such vehemence, you must be ready to give it up, entirely and completely. You have to mean it. Even if West means every word, the horror show of his experiences with the fashion world suggests that "New Slaves" is more personal than explicitly philosophical, and everything he wore on Saturday Night Live was inevitably styled within an inch of its life. Yet there's a bravery to how skeletal and barbed this is, and a 1984-esque daring in the way it was unleashed into the world, er, the wild, and everyone who's felt the lure of a Burberry retail store knows he's in the right.